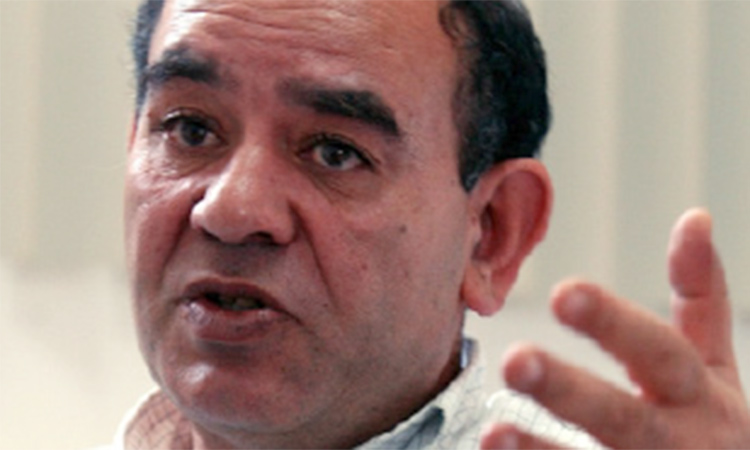 With the award of Knight of France’s National Order of Merit, Raji Sourani became the most highly and widely decorated civilian in the Arab world. The knighthood, conferred by French President Emanuelle Macron, is particularly special because France and Macron himself have always been loyal supporters of Israel while Sourani is a constant critic. To deliver the award, the highest bestowed annually, France’s Consul General Rene Troccaz had to travel to Israeli besieged and blockaded Gaza. Like his two million Palestinian compatriots Sourani depends on rarely granted Israeli permits to leave and return to the strip.

At a ceremony at the French cultural centre in Gaza City, Troccaz praised Sourani’s commitment to human rights, freedom of thought, and peace and his stewardship of the Palestinian Centre for Human Rights (PCHR). The Centre, was founded in 1995 by Sourani, to monitor the activities of Israel’s occupation enterprise and military forces in Gaza and the West Bank. He has recruited teams of lawyers and activists to carry out this onerous, never-ending task. The PCHR recently achieved a major breakthrough by helping to get the Israeli occupation of Palestine taken up by the International Criminal Court.

On its website, the PCHR defines its mission as protecting human rights, promoting the rule of law, creating democratic and civil society institutions, and supporting the Palestinian right to self-determination. The Centre receives funding from Swedish, US, Dutch, Spanish, British organisations as well as the European Commission, Ireland, and the UN Office of the High Commissioner for Human Rights.

The PCHR carries out its mission under extremely daunting circumstances due to the everlasting Israeli occupation of Gaza, East Jerusalem and the West Bank. Palestinians face house demolitions, check points, attacks and arbitrary arrests by security forces as well as assaults by settlers. Children are harassed while walking to schools, young men are picked up on their way to work, women are insulted while shopping, fisherman are fired upon while hauling in their nets off Gaza, and health workers blocked from making their rounds.

Born in 1953 in Gaza, Sourani took his law degree in 1977 from the University of Alexandria in Egypt and returned to the strip to practice law. He gained the reputation of Gaza’s foremost human rights defender during the 1980s while representing Palestinians facing deportation and Israeli military courts. In 1990, Sourani was appointed the director of the Gaza Centre for Rights and Law. In 1991, he received the Robert Kennedy Human Rights Award honouring individuals who fight for rights although the strongly pro-Israeli US senator was shot dead by Palestinian Sirhan Sirhan in June 1968 while campaigning for the US presidency. Robert Kennedy was the brother of slain US president John Kennedy. Sourani has a bust of Robert Kennedy in his office.

Sourani was himself arrested four times by Israel, beaten and subjected to psychological abuse. He was twice an Amnesty International prisoner of conscience. Nevertheless, he was castigated by fellow Palestinians for cultivating connections with Israeli rights organisations which proved invaluable for his work.

After the 1994 creation of the Palestinian Authority he was detained briefly for criticising its establishment of a state security court. Sourani is not only known an outspoken critic of human rights abuses by Israel but also by the Authority and Hamas which rules Gaza.

In October 2013, Sourani became the first Palestinian to win the Right Livelihood award, widely known as the “Alternative Nobel Peace Prize,” presented by the Heinrich Boll Foundation in Germany. Sourani was cited: “For his unwaverying dedication to the rule of law and human rights under exceptionally difficult circumstances.”

This correspondent met Sourani early during the first Intifada (1987-93) soon after he was released from an Israeli prison and, since then, I have tried to visit the PCHR every time I am in Gaza. In 2009, following Israel’s brutal assault on Gaza, I had a chance to report on how the PCHR deal with cases.

I accompanied a PCHR investigator who was documenting the bombingof a farm at the northern end of the Gaza strip. The farm’s owner, Salah al-Ghoul, drove us in his battered jeep through a blasted landscape where roads were erased, houses flattened, and fields ploughed by tanks. Even the American International School was flattened. Ghoul’s wife, two sons and five daughters had gone to Gaza City, while he, son Muhammad and nephew, Akram had remained at the farm to care for livestock. On Jan. 3, at 4.15 in the afternoon, Ghoul and a worker were feeding the calves when the house disappeared in a cloud of smoke and dust. The men covered their faces and rushed to the site to find only rubble and the dismembered bodies of the youths.

Ghoul said, “We had coordination with the Israeli military. My cousin was in constant contact with the local commander. The Israelis watch everything that goes on in this area. They even know which birds are nesting in which trees. They know us and are aware there were no fighters here.”

As we stepped out of his vehicle, he pointed out an Israel watchtower 500 meters from his front gate. We scrambled across over chunks of concrete and broken tiles in the garden and made for the shed where the bloated bodies of six cows and the remains of a baby camel lay among feathers from two dead ducks.

When his cousin heard the explosions and saw the smoke, he rang an Israeli Druze officer to arrange clearance for a rescue mission. A jeep driven by the cousin’s son was struck by two shells breaking the young man’s leg and a Red Crescent ambulance was fired upon when it tried to rescue him.

A few hours after the strikes, Israeli television showed photographs of the F-16 strike on the house taken by cameras in the nose of the plane. Ghoul had sunk his entire savings into the house and farm and planned to lodge legal proceedings through the PCHR against Israel.