Free in the eyes of law; guilty everywhere else - GulfToday 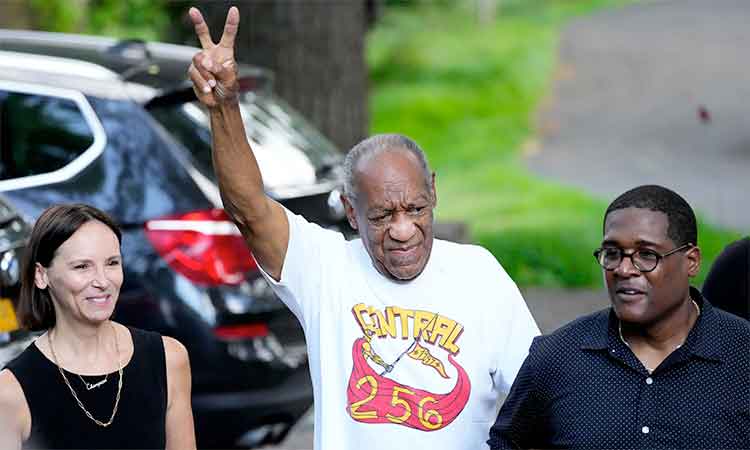 Bill Cosby may have been freed from a 10-year prison sentence for sexual assault by the Pennsylvania Supreme Court on a technicality, but his Jell-O Pudding days are over.

So are his E.F. Hutton and “Hey, hey, hey, it’s Fat Albert” days. He will never stroll across a university stage to deliver a commencement speech or receive an honorary doctorate from any institution ever again. Residual checks from airings of “The Cosby Show” are going to be few and far between.

Bill Cosby, now 83, partially blind and looking enfeebled even as he flashed Nixonian two-fingered peace signs above his head outside his home in suburban Philly on Wednesday, has no hope of ever reclaiming the esteem commensurate with his accomplishments as a pathbreaking comedian and actor during the waning days of Jim Crow. Before he was America’s TV Dad, he was a pioneer of Black aspiration whose comedy albums sold in the millions and whose tours were national sellouts and TV specials were ratings winners.

Still, every one of his obituaries will lead with the fact that he was convicted of sexually assaulting Andrea Constand and served nearly three years of his 3 to 10 year sentence before the Pennsylvania Supreme Court vacated the verdict and forbid future prosecution based on testimony that led to his 2018 conviction.

In future obituaries, Cosby will get grudging credit for bankrolling causes near and dear to Black America, especially struggling HBCUs and scholarship programmes that benefitted from his largesse. But other than his family and the lawyers he enriched, there will be no affectionate words for or about him when he passes from this mortal coil.

Bill Cosby will never be accepted by the mainstream again despite working for decades to assure America of his fatherly bonafides and essential harmlessness. He presented himself as a cigar-chomping media mogul, wise sitcom dad, philanthropist and responsible image maker whose scripts passed the sniff-test of psychologists he employed to remove material that had even a hint of stereotype or negativity about Black people.

Still, it will be hard to laugh at the antics of Cliff Huxtable once you’ve begun to imagine the slurred and disoriented pleas of the more than 60 women who have accused Cosby of various kinds of sexual assault over half a century. Creepy Weird Harold isn’t quite as funny once you’ve heard his creator’s own testimony about slipping quaaludes into an unsuspecting woman’s drink.

Cosby will never occupy the moral high ground again, but that doesn’t mean he isn’t an inspiration for for other morally corrupt celebrity millionaires. Convicted rapist and former Hollywood studio head Harvey Weinstein has to be taking special delight in Cosby’s Houdini-like escape from justice.

Cosby should also become a cautionary tale about the price of communities electing terrible people to the District Attorney’s office even after they’ve demonstrated a tin-ear for justice.

The Pennsylvania Supreme Court freed Cosby because of the 2005 deal his lawyers made with Montgomery County DA Bruce Castor, Jr., who promised his office would never prosecute the comedian in exchange for potentially incriminating testimony in Ms. Constand’s civil suit.

Consequently, Cosby told the truth about drugging Ms. Constand. He assumed that his testimony and the $3.3 million settlement with the Temple University employee would be subject to a gag order and sealed from public view. After all, the settlement was a mere pittance for a man whose net worth was close to half a billion at the time.

The real prize as far as Cosby and his lawyers were concerned was DA Castor’s promise not to prosecute him, leaving him free to continue in his newly-minted role as a national scold making “Pound Cake” speeches decrying the Black American underclass for its “loose morals.”

Castor’s decision not to prosecute Cosby was consistent with the treatment wealthy defendants routinely received from district attorneys intimidated by the legal firepower at a wealthy celebrity’s disposal.

Think about the 2008 non-prosecution deal serial rapist Jeffrey Epstein’s lawyers struck with Florida US Attorney Alexander Acosta despite complaints from dozens of women that they had been raped by the financier. Acosta didn’t believe his office had the fire power to go up against one of the wealthiest men in the country, so he put the creep behind bars on lesser charges in exchange for dropping the most serious charges.

Epstein, who was sent to a country club prison that allowed him to go home on the weekends, was so unbothered by his conviction that he treated his guards and other prison officials to parties at his Florida mansion. That’s how “seriously” many regional district attorneys and US attorneys took rape allegations against wealthy men before the #MeToo movement emerged in all of its righteous fury.

Fast forward to 2015 and the national mood and tolerance for powerful, sleazy men getting away with sexual harassment and rape shifted drastically. Bruce Castor’s successor ran on a promise to prosecute Cosby if elected — a promise he was happy to keep. Just before the statute of limitations ran out in Ms. Constand’s case, Cosby was arrested and his secret testimony was unsealed during the trial, incriminating him.

His lawyers and supporters were outraged that he was put on trial despite the previous DA’s promises. His previously sealed testimony was used along with the testimony of several other victims who told their stories during his trial.

Cosby was convicted in 2018 and sentenced to what many believed would effectively be a life sentence — a decade behind bars. The assumption was that he would never leave prison until he was carried out for a final trip to the funeral home.

For the nearly three years he has been behind bars, he did not cooperate with prison officials by going to mandated sex offender counseling, so he was recently denied parole. Outside of his testimony during his civil trial, he has never conceded his guilt.

Meanwhile, his lawyers zeroed in on the argument that regardless of what one thinks of Bill Cosby as a human being, he was double-crossed into giving damaging testimony about himself to a lazy District Attorney who suspected he couldn’t get a conviction the old-fashioned way.

The Pennsylvania Supreme Court agreed with the thrust of the argument that Cosby’s rights were violated when he accepted a deal that wasn’t enforced and freed him. Bill Cosby’s conviction has been vacated and he is no longer a convicted sex offender in the eyes of the court. In the eyes of public opinion, nothing has changed. That won’t stop his lawyers from trying to spin it as a victory of “the little guy against a corrupt criminal justice system.” Yeah, whatever.

Having said that, there is no reasonable doubt that Bill Cosby is guilty of the crime he spent three years in prison paying for. That’s three years of his elderly life he can’t get back. In this world of terrible DA’s, imperfect justice and preferential treatment for the rich, it may be the closest we can get for now to something approximating justice.

Bill Cosby may be free, but he will never have the presumption of innocence again. He’s shown us that under that mischievous grin that made billions of dollars for General Mills, Coca-Cola and NBC, he’s just another criminal with an expensive legal team running interference for him. He’s guilty as hell.