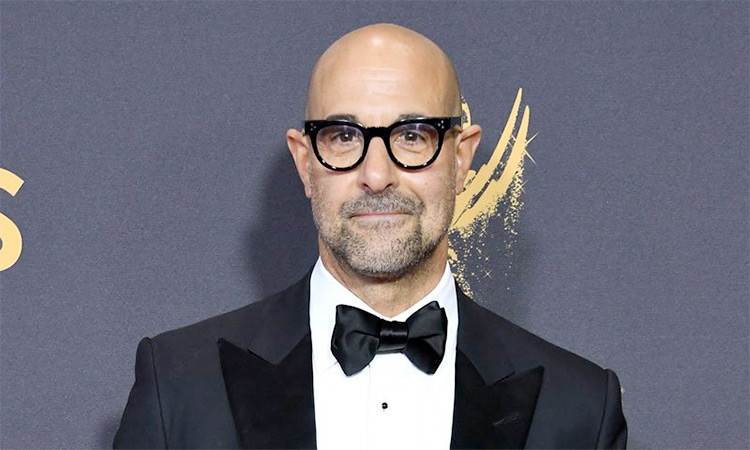 A familiar face and bald pate on cinema’s silver screen, Stanley Tucci is striking out as a tour guide and host in a television quest for Italy’s finest food.  “Searching for Italy” is a six part CNN series which accompanies Tucci as he travels around the country exploring its culture and history through its food. “This was a passion project and love letter to the place where my family is from,” said Tucci, a man who grew up in a close Italian family with a rich food culture.

The first episode in the series, set in Naples and the Amalfi Coast, explores the origins of pizza, Italy’s second most famous export after spaghetti. He walks through the narrow streets of Naples, laundry hanging from the tenements above his head, in search of popular dishes which began as the daily fare of the poor, including the fried folded-dough stuffed with pork and ricota which was the progenitor of pizza. He tracks down the fresh buffalo mozzarella and tomatoes featured in a superior pizza baked in moments in a wood-fired oven by a high-end chef. He travels by ferry to the island of Ischia from Naples to feast on local wild rabbit at a famous family restaurant on a forested hilltop with a splendid view.

The second episode takes place in Rome where the focus is on spaghetti which. Tucci says, “defined Italy to the entire world.” The noble noodle became the daily staple in the Italian diet because it is affordable for poor and rich alike and highly adaptable. Tucci learns that when World War II Italian dictator Benito Mussolini tried and failed to ban spaghetti to reduce the country’s reliance on imported wheat, spaghetti became a symbol of resistance to Fascist rule.

This correspondent is eager to see the remaining episodes from Bologna, Milan, Tuscany and Sicily in  coming weeks.

CNN decided to create the series following the death of Anthony Bourdain whose award-winning travel show “Parts Unknown” covered the globe and embraced multiple cultures and civilisations. So far, Tucci’s Italian venture, which premiered in February-March this year — and is being rebroadcast on Sundays at 1900 hours UAE time — has received positive reviews. The review-assess-ment website Rotten Tomatoes gave it 83 per cent. A positive rating means a programme or film must score 75 per cent and higher.

A devoted fan, Patrick Freyne wrote in The Irish Times that Tucci does not describe the “geographical landmass..but the spirit of [Italy’s] people as expressed through their food.” Freyne continued, “Searching for Italy is a beautifully old-fashioned type of documentary series. It involves a man who savours his words almost as much as he savours his food, experiencing quirks of culinary history while trailed by an observant camera crew.”

Caroline Framke of the theatrical weekly, Variety, wrote, “Tucci’s comfort in Italy and palpable love for its culture is genuinely infectious — not just for those he meets and charms along the way, but for this viewer, too. And in the all important test of how voraciously a travel show host actually eats the food on offer, Tucci passes with flying colours, happily engulfing every bite with vigour.” He should be able to achieve this. Tucci is, above all, an actor with 40 years of experience on screen as well as off as writer, producer, and director.

Tucci was born in Peekskill, New York, in 1960 to a couple of Italian descent with roots in Calabria.  During the early 70’s, when Tucci was at an impressionable age, the family spent a year in Florence. Although he played sports during high school, his real love was the drama club where he took part in performances. He attended the State University of New York where he majored in drama, graduating in 1982.

Tucci made his film debut with a small part in John Huston’s black comedy film, “Prizzi’s Honour,” starring Hollywood majors Jack Nicholson, Kathleen Turner, and Anjelica Huston. His breakthough came in the legal drama “Murder One” television series in which he won a Primetime Emmy Award nomination. He secured the award itself in 1998 playing US radio broadcaster Walter Winchell in the film “Winchell.” Tucci became a widely recognised actor in 2006 and 2009 playing alongside

Meryl Streep in “The Devil Wears Prada” and “Julia and Julie,” where he played the husband of US television chef Julia Child. In 2012, he published “The Tucci Cookbook,” his first, and began to pick up major roles. He became co-owner of the Finch Tavern restaurant in Croton Falls, New York.

His first wife Kate Spath-Tucci, with whom he had three children, died of cancer in 2009, and he married British literary agent Felicity Blunt in 2012. They have two children. In 2014 the pair published “The Tucci Table: Cooking with Family and Friends.” In 2016, Tucci appeared with half a dozen leading actresses and actors in a UN refugee agency film meant to publicise the global refugee crisis. In May this year, he received an honourary doctorate from the American University of Rome for his contributions to the arts and humanities.

For many years Tucci has been determined to avoid Hollywood mafioso stereotypes and play Italian characters as normal human beings struggling for a living. This led him to partner his cousin, writer Joe Tropiano, in “The Big Night” a film about two brothers, played by Tucci and Lebanese-origin actor Tony Shalhoub, who are trying to save their failing Italian restaurant. It serves genuine ethnic dishes while local residents demand spaghetti and meat balls and, horror of horrors, tinned antipasti. The action climaxes in a “big night” banquet of Italian delicacies for celebrity bandleader Louis Prima and New York food columnists to publicise the restaurant and draw customers.

To be authentic, the chief actors had to train for their roles in restaurants, Tucci in New York City and Shalhoub Los Angeles. The script won the 1995 jury prize for screenwriting at actor Robert Redford’s Sundance Film Festival in Salt Lake City, Utah.

Since his Italian series is having a second airing on CNN suggests CNN might expand it to take in more locations. Tucci has, reportedly, suggested 20. His fans will be excited if even a few more episodes are commissioned. If not, perhaps, Tucci could travel elsewhere to investigate how foods have emerged in societies with different circumstances and histories.