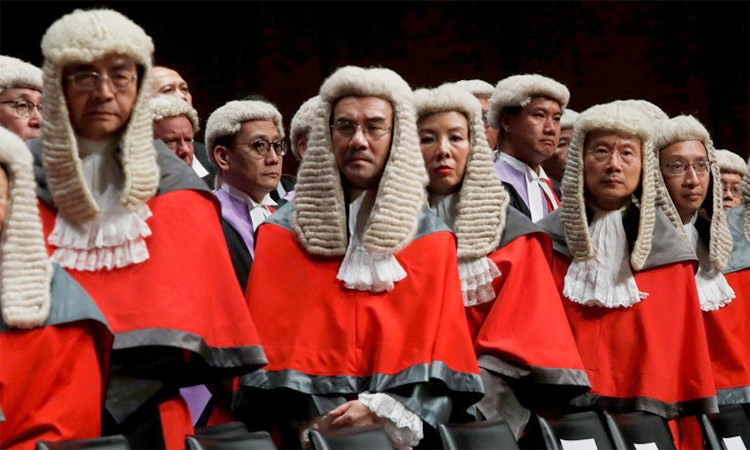 Judges take part in a ceremony to mark the beginning of the legal year in Hong Kong. The chief justice has warned judges not to comment on political matters. File/Reuters

China’s national security law for Hong Kong has shaken the city’s legal foundations in the year since it was imposed, lawyers say, with court decisions and sweeping new powers for prosecution fuelling concerns about rights and the rule of law.

Unlike the Communist Party-controlled courts in mainland China, Hong Kong has an internationally respected common law system that forms the bedrock of its reputation as a global financial hub.

Circumventing Hong Kong’s own legislature, the security law was drafted in Beijing with the wording kept secret until it came into force on June 30 last year as authorities tightened controls after massive and often violent pro-democracy protests in 2019.

In the year since the law was enacted, Hong Kong judges have declared that jury trials are not a constitutional right, and the presumption of bail is not guaranteed in national security cases.”It’s like an alien species invading our territory, an unstoppable sandstorm sweeping from the north,” a defence lawyer told AFP.

He was one of four defence counsels involved in ongoing national security cases that spoke to AFP, on condition of anonymity so they could speak freely.

They alleged that Hong Kong courts now only “paid lip service” to rights when national security rules came up against longstanding protections in the city’s own legal system.

Trial-by-jury has been a 176-year-old cornerstone of Hong Kong’s common law system.

Constitutional law scholars have warned of the threat to the city’s legal system, with courts trying to avoid irritating Chinese authorities, who hold final authority in security law cases.

“When (the court) gives up a fundamental right without any rigorous scrutiny, it is also providing an intellectual rationalisation for a draconian regime,” Johannes Chan, the University of Hong Kong’s chair professor of public law, wrote in a journal article in May.

“If the judiciary is not vigorous and vigilant in protecting fundamental human rights, there would no longer be any rule of law.”

Hong Kong’s judiciary declined to “comment on the legal or other substantive issues in individual cases”, citing the principle of judicial independence.

Hong Kong and Chinese authorities say the security law has successfully restored stability after the 2019 demonstrations, but critics say it has cracked the legal firewall between Hong Kong and China. The law has radically transformed the political and legal landscape of a city authoritarian China promised would be able to keep key liberties after its 1997 return from Britain. China now has jurisdiction over some cases and the law has allowed its security agents to operate openly in Hong Kong for the first time.

The law has also removed the presumption of bail for non-violent crimes. Those charged have to instead prove to judges they will not pose any sort of national security threat.

Defending the accused “is an impossible task,” one lawyer told AFP. “This is presumption of guilt.”

In an extreme case, 47 pro-democracy activists facing national security charges had to undergo a four-day marathon bail hearing in March. One of them fainted from exhaustion and several had to be rushed to hospital.

“Our judicial independence and rule of law are now like a piece of glass with a crack,” the first defence lawyer said. “The crack will continue to grow and eventually break the glass.”

There are fears that the new environment may impact even judicial appointments.

The Financial Times reported last week that pro-Beijing lawmakers in Hong Kong stepped in to prevent the appointment of a judge in the city’s top court, citing two sources familiar with the matter.  Authorities have more weapons under the security law that they have yet to use, including the extradition of defendants to mainland China’s opaque, Party-controlled justice system, and closed-door trials with citizens and journalists shut out. Brenda Hale, a senior British judge, announced this month she will quit Hong Kong’s top court when her term ends, stating there were “all sorts of question marks” over the new national security law, according to media reports.

Some have argued that given the power Chinese authorities now have over these cases there is not a lot of room for Hong Kong’s courts to manoeuvre.