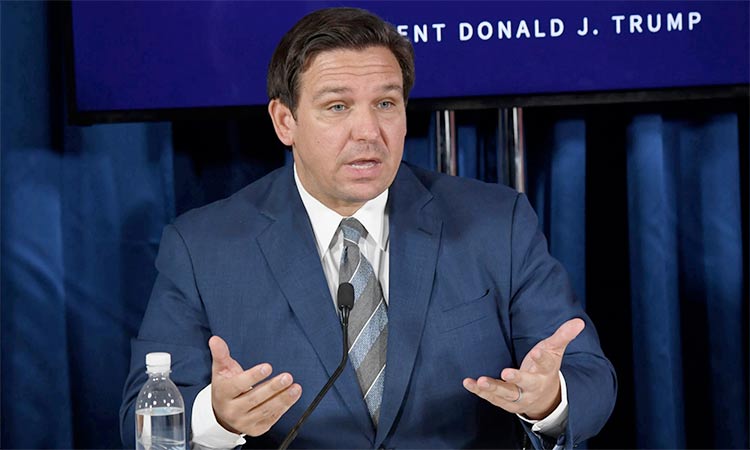 Another day, another set of laws signed by Florida Governor Ron DeSantis restricting free speech under the guise of “guaranteeing freedom of expression.” One of the three education-related bills DeSantis just signed expands ‘civics’ education at K-12 schools, by requiring the development of lessons preaching the evils of Communism and offering ‘Portraits in Patriotism.’ Another of the bills requires that universities survey students, professors, and staff about their political views to crack down on ‘indoctrination’ under an implied threat of removing financial support for institutions that fail to comply.

“It used be thought that a university campus was a place where you’d be exposed to a lot of different ideas. Unfortunately now, the norm is really these are more intellectually repressive environments,” DeSantis said. “You have orthodoxies that are promoted and other viewpoints are shunned, or even suppressed. We don’t want that in Florida.”

DeSantis signed the bills during a photo op at a Lee County Middle School. And in case you were curious about distortions of history, yes, Lee County is named after the seditionist, slavery-supporting Confederate General, Robert E. Lee. Maybe Lee will be one of the patriots who Florida students can get a portrait of during their matriculation.

Media-savvy victory parties against invented foes are very much on-brand for the Sunshine State’s chief executive, who is presently engaged in one of the more successful marketing campaigns within the GOP. DeSantis goes after political enemies using the mechanisms of the state. He whines and fulminates in primetime on Fox News. He loves cops, hates protesters, fights the press, takes on Big Tech censorship and critical race theory and any and all chimerical enemies. Oh, and he’s a white man.

We might just be looking at the next Republican superstar.

The era of the dog-whistle is over. Now, all the 2024 hopefuls are scrambling to prove who among them can keep the base properly frothed up while maintaining the flimsiest scrap of plausible deniability about the party’s now-explicit white nationalism and illiberalism to keep the corporate donors from clamming up the coffers. Not everyone can do it well. Josh Hawley is too staid. Marjorie Taylor Greene is a skosh over the space laser line. Mitch McConnell is, notably, a frog. DeSantis looks to have nailed the delicate balance.

The base — the people who think Joe Biden’s not really president, Covid is fake/a bioweapon/no worse than the flu, and we are all just minutes away from uncovering that Hollywood sex-trafficking cabal — are agog over DeSantis. At a straw poll conducted at the Western Conservative Summit in Denver over the weekend of June 19th and 20th, DeSantis came out on top of candidates for the 2024 election, narrowly edging out the ex-Pres and current titular GOP head, Donald J Trump, by 74.12 per cent to 71.43 per cent.

As for the all-important cash-raking prowess, DeSantis is doing just fine. He’s been criss-crossing the country and fundraising off his profile of conservative stalwart and defender of the silent majority. In May, he raised $7.5 million, entering June with $39 million cash on hand for an election months away. DeSantis enjoys a strong position with Florida voters, polling from May showing him besting the likely candidates by double digits. (Representative Val Demings has chosen not to enter the governor’s race to try her hand at ousting another Florida Republican, Senator Marco Rubio).

We don’t have to go back too far to highlight the Florida governor’s increasingly brazen assault on democratic governance and norms. In April, surrounded by an all-white crowd, DeSantis signed an anti-protest bill, which criminalised dissent, and normalised and shielded from civil liabilities the perpetrators of the preferred terrorist tactic of right-wing supporters — running protesters over with their cars. The normalisation of this violence by DeSantis must be contextualised against some important background information.