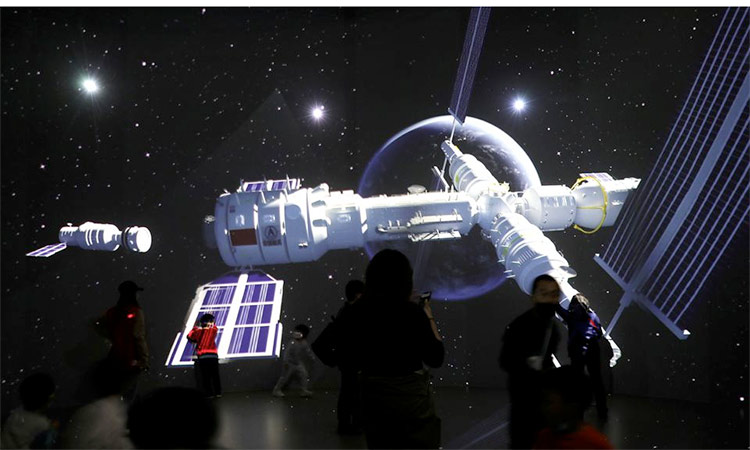 Visitors stand near a giant screen displaying the images of the Tianhe space station at an exhibition at China Science and Technology Museum in Beijing, China. Reuters

In the 1950s and the 1960s there was a fierce space race between the then superpowers and ideological rivals, the United States of America, and the former Union of Soviet Socialist Republics (USSR) or Soviet Russia. When Russians launched the first artificial satellite in 1957, the Americans sat up and realised that communist Russia got ahead of them at a new frontier.

In response, the Americans set up the National Space Administration Agency (NASA) to launch a space programme of its own, and American President John Kennedy declared in 1961 that America will put its men on the moon, and the Americans fulfilled the Kennedy promise by landing Louis Armstrong on the moon in July 1969.

The USSR had disintegrated in 1991 and America is not the superpower that it was. For more than a decade now we are witnessing the emergence of a new power in economic and technological terms.

China is now the second largest economy with a $14 trillion Gross Domestic Product (GDP), far behind America’s US$21 trillion. But it is evident that China is the league of top two. And now to prove its preeminent position in the global power stakes, the Chinese have been taking steady steps in space. On June 17, China launched its three-crew space mission to construct its space station, Tiangong.

China is not part of the existing and ageing International Space Station (ISS) which is a collaborative effort of the United States, Russia, European Space Agency, Canada, and Japan.

Consequently, the Chinese had decided to set up a space station of their own, which is likely to be commissioned in 2022. Interestingly, the ISS will be decommissioned next year, and the Chinese space station will be the only one in orbit. This is no small achievement because the Chinese had decided to do it on their own, and it is also a quiet declaration that China is making a place for itself on the technological frontier.

The Chinese had already run their Moon and Mars mission, retrieved lunar soil samples and the Chinese robot, Zhurong, had sent pictures of itself from the Martian surface.

It is the case that there is no space race as there was one between the United States and Russia, though space exploration has come back to life after a few decades with the Americans, Indians launching their Mars missions.

The Chinese have grabbed the opportunity as it were of establishing an outpost in space as well. If there is a space race between countries, it is an undeclared one. The United Arab Emirates (UAE) is now part of it too with its successful Mars mission with Hope orbiter launched in July 2020 reaching Mars in February this year. The first module Tianhe, which will be part of the multi-modular Chinese space station, was launched at the end of April.

The three Chinese astronauts who reached the space station under construction will be engaged in putting together the different parts.

But the rest of the world, especially the Western powers led by the United States, view the Chinese space effort with suspicion. The West considers China as an ideological opponent, a communist country like the old Soviet Union. The Chinese reality is slightly different.

The Chinese economy is a thriving market economy, and the Chinese leaders describe it as socialism with Chinese characteristics.

After the outbreak of the COVID-19 pandemic at the end of 2019 in Wuhan in China, the Chinese leaders are viewed as ideological rivals if not as ideological enemies. And every Chinese move, including its space mission, is viewed as part of a global power game.

Boris Johnson turns out to have privately yearned to adopt the same approach as Brazilian president Jair Bolsonaro who publicly favoured allowing Covid-19 to rip through his nation.