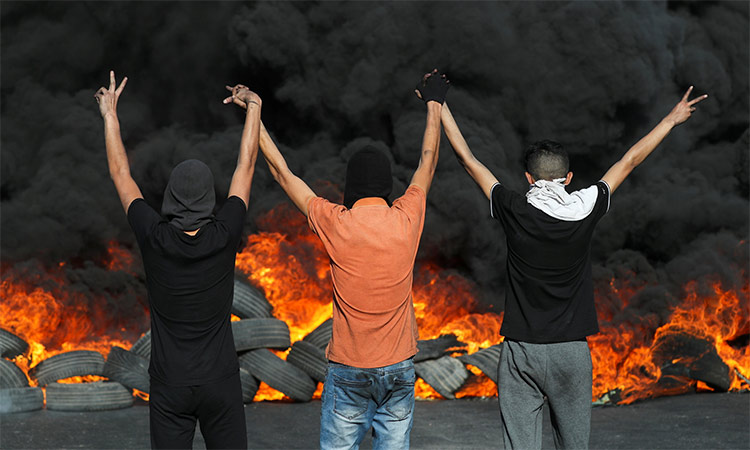 Palestinian demonstrators look at burning tires during a protest over tension in Jerusalem and Israel-Gaza escalation, in the Israeli-occupied West Bank. File/Reuters

A ceasefire in Gaza usually means calm across Israel. Not this time. Near Ramallah, Palestinians enraged over the occupation of the West Bank face off against Israeli forces firing tear gas and rubber bullets. In Lod, Jaffa and other mixed Israeli cities, Palestinian residents warily eye their Jewish neighbours — and vice versa — as they walk streets that were battlegrounds weeks ago. Every day in East Jerusalem’s Sheikh Jarrah district brings fresh confrontations between Israeli riot police and Palestinian activists.

The war between Israeli forces and Hamas group in Gaza was stilled after a May 21 ceasefire. But tensions between Palestinians and the state of Israel have remained and — together with the 11 days of bloodshed — have catalysed a newfound Palestinian solidarity that could mark an important new moment in the Mideast conflict, activists say.

For years, Palestinians have been subject to geographical and political divisions that have created vast differences between those living under the Palestinian Authority’s aegis in the occupied West Bank, under Hamas’ control in Gaza or under Israeli government rule as citizens of Israel, not to mention the Palestinian diaspora spread across the Middle East and beyond.

But the clashes in East Jerusalem, the sectarian violence in Israeli cities and the fighting in Gaza have narrowed those divisions, said Adrieh Abou Shehadeh, a Palestinian citizen of Israel who lives in Jaffa, outside Tel Aviv. Palestinians from all regions awoke to what they saw as a common thread running through their struggles: their quest for recognition and equality, and Israel’s resistance to it.

“What Israel did recently was its biggest strategic mistake: It showed Palestinians the reality, that it deals with all of us this way… that we’re all unequal,” said Abou Shehadeh, the founder and curator of Hilweh Market, a Palestinian artisanal boutique.

“Israel created a hierarchy for Palestinians from different places. But the way it dealt with us in this time, there was no difference. It showed us the cause is one.”

Mariam Barghouti, a Ramallah-based writer and researcher, agreed that the latest crisis has helped galvanise unity of purpose among Palestinians across the Holy Land.

“It’s pressuring all representatives to try to listen to the Palestinian population and respond to the reality on the ground,” she said. “This isn’t just a problem of negotiations, but a problem of the practices being faced by us as Palestinians.”

That growing sense of solidarity among Palestinians is playing out against the backdrop of political turmoil in Israel, where a new government is all but certain to take power in coming days.

But because the incoming ruling coalition draws from across the Israeli political spectrum, it is not expected to achieve consensus on issues such as reviving talks over the creation of a Palestinian state. In a historic first, an Islamist party will also participate in the new government, in what it says is a bid to redress government discrimination against Palestinian-dominated municipalities, as well as legal practices targeting Palestinians living within Israel’s borders.

Palestinians say there is much to redress. For proof, many look to East Jerusalem and the neighbourhood of Sheikh Jarrah, where Jewish settler groups have fought to take over houses from longtime Palestinian residents following a court ruling.

Israeli authorities dismiss the battle as a “real estate dispute.” But Palestinians insist it’s part of a wider effort to expand Jewish control that amounts to a form of apartheid — a controversial term that has gained currency among Palestinians to describe their experiences and that Israel’s own leading human rights group, B’Tselem, has adopted.

Drawing particular ire is a 2018 law defining Israel as the nation-state of the Jewish people, which acknowledged only Jews’ right to self-determination in the Holy Land, and the removal of Arabic as an official language of the state, even though Arab citizens of Israel account for one-fifth of the country’s population.

“These are systemic practices that we’ve seen in Haifa, Tel Aviv, Lydd [the Palestinian name for Lod] and Jaffa, turning Palestinians into tokens that are only symbols of Israel’s democracy, instead of what is actually happening: the erasure of Palestine and the Palestinians,” Barghouti said.

In the Old Quarter of Lod, a city of 77,000 people 10 miles southeast of Tel Aviv, clashes erupted between Jewish ultra-nationalists and Palestinian Israelis last month as the war between Hamas and Israel inflamed ethnic passions. Two residents were killed: a 32-year-old Arab man, Musa Hassuna, and a 56-year-old Jewish man, Yigal Yehoshua. The city’s mayor, Yair Revivo, has been accused of fomenting division. He said recently that crimes by Palestinian residents represented an “existential threat to the state of Israel,” and in December, he told Israeli radio that “Jewish criminals have a drop of compassion. Arab criminals... don’t have any inhibitions.”

“Why was there anger here? It’s because everything is available to the Jews, not to the Arabs,” Abu Sahaab said.

He pointed to the asphalt lot across the street. “Even parking they give to them, not to us.”

Near him, Ghassan Mounayer, a Palestinian resident of Lod and a political aide with the Joint List, a coalition of the main Palestinian parties in Israel, complained of increasing discrimination against Arabs, with restrictions going as far as dictating where they could live in the city.

“Jews won’t sell property to us. There are no new neighbourhoods where we can go,” he said, adding that though Palestinian residents made up more than a third of Lod’s population, most were crammed into the Old Quarter.

Two weeks after the last missiles and rockets flew over Gaza, there has been no return to calm in Sheikh Jarrah, near Jerusalem’s historic Old City.

Sometime last month, Israeli authorities set up checkpoints at the neighbourhood’s entrances, checking the IDs of those who enter and turning away activists who show up in support of those living there. The main street of the neighbourhood has become a social media battleground, with Palestinian activists and Jewish settlers walking by each other with smartphones filming.

On Sunday, Israeli police arrested Muna and Mohammad Kurd, a sister and brother who have emerged as the focal point of the Sheikh Jarrah protests. (They were released a few hours later.)

The Kurds, who are 23-year-old twins, hint at a generational change underway. Like other younger Palestinians, they’re less concerned with the traditional debates over Palestinian statehood and with old-guard political parties — including Fatah, which dominates the Palestinian Authority — than they are with more general notions of equality. They draw inspiration from movements like Black Lives Matter, employing the same rhetoric to capture the zeitgeist, as well as world attention.

“Viewing the police as a dangerous force against us, we took this from BLM,” said Jack Saba, Abou Shehadeh’s husband and a community organiser in Jaffa. He believes that President Biden’s support for Black Lives Matter compelled him into pushing for the ceasefire between Hamas and Israel last month.

“The reason Biden couldn’t toe the line he wanted, about Israel’s right to self-defense, was BLM,” he said.

Still, the rise in attention to the plight of Palestinians hasn’t translated into official policy on the part of Israel or the US, its biggest ally, said Khaled Elgindy, director of the program on Palestine and Palestinian-Israeli affairs at the Washington-based Middle East Institute. 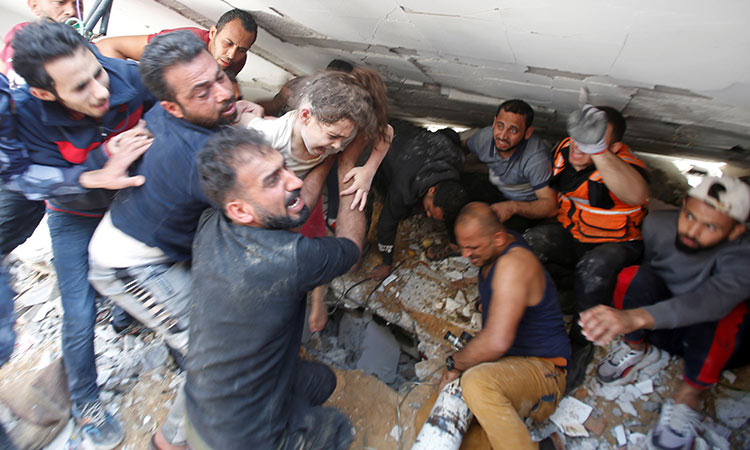