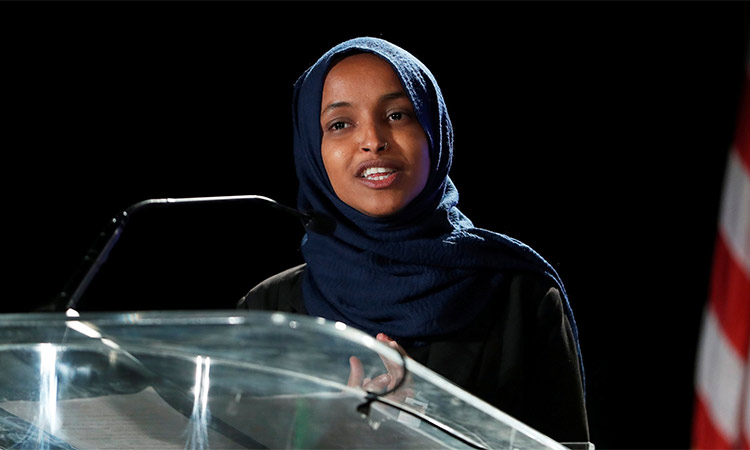 US congresswoman Ilhan Omar faced broad condemnation including from her Democratic Party’s leadership after the Muslim lawmaker accused the United States and Israel of “unthinkable atrocities” comparable to those of Hamas and the Taliban.

Omar, who in 2016 became one of the first two Muslim women elected to the US Congress, has antagonised members of her party in the past with comments denounced as anti-Semitic or anti-Israel. But top Republicans and Democrats alike have seized on her recent criticism of the United States to demand she clarify her remarks, with some calling outright for punishment including being stripped of her House of Representatives committee assignments. Twelve Jewish House Democrats issued a public letter of disapproval against a member of their own party, writing that “equating the United States and Israel to Hamas and the Taliban is as offensive as it is misguided.”

“The United States and Israel are imperfect and, like all democracies, at times deserving of critique, but false equivalencies give cover to terrorist groups,” wrote the group, led by Brad Schneider of Illinois.

“We urge Congresswoman Omar to clarify her words.” At a House hearing on Monday, Omar — who was born in Somalia and immigrated to the United States as a refugee in the mid-1990s — grilled Secretary of State Antony Blinken over accountability for victims of crimes against humanity. She then followed up with a tweet that read: “We have seen unthinkable atrocities committed by the US, Hamas, Israel, Afghanistan, and the Taliban.”

Amid the firestorm, the six-member House Democratic leadership team headed by Speaker Nancy Pelosi issued a rare public rebuke of a fellow Democrat, even as they acknowledged that criticism of US human rights policy is protected speech. “But drawing false equivalencies between democracies like the US and Israel and groups that engage in terrorism like Hamas and the Taliban foments prejudice and undermines progress toward a future of peace and security for all,” they said.

“Speaker Pelosi’s continued failure to address the issues in her caucus sends a message to the world that Democrats are tolerant of anti-Semitism and sympathizing with terrorists,” he added.

“It’s time for the Speaker to act.”

The 38-year-old Minneapolis congresswoman, who has repeatedly criticized Israel’s policies towards Palestinians, pushed back on Thursday.

She said her earlier remarks were related to an open case against Israel, the United States, Hamas and the Taliban in the International Criminal Court. But with colleagues fuming, Omar issued a statement insisting her comments were “not a moral comparison.”

“I was in no way equating terrorist organisations with democratic countries with well-established judicial systems,” she said.

Lawmakers from both camps were nevertheless fierce in their condemnation. Republican Senator Tom Cotton said Omar, a naturalized US citizen, was “welcome to leave” if she believed America was hateful.

“She should immediately be removed from her committees,” Cotton said, echoing several House Republicans demanding such action, especially removal from the influential House Foreign Affairs Committee. More Democrats also began calling on Omar to tone down her rhetoric.

She “ought to walk it back,” congressman John Garamendi told CNN. “This kind of language incites violence here in the US.”

Anti-Semitic attacks increased sharply in May in the US, amid a deadly conflict between Israel and Hamas, according to the Anti-Defamation League. Omar received support from the other Muslim woman in Congress, Rashida Tlaib, who said she was tired of colleagues “demonising” Omar.