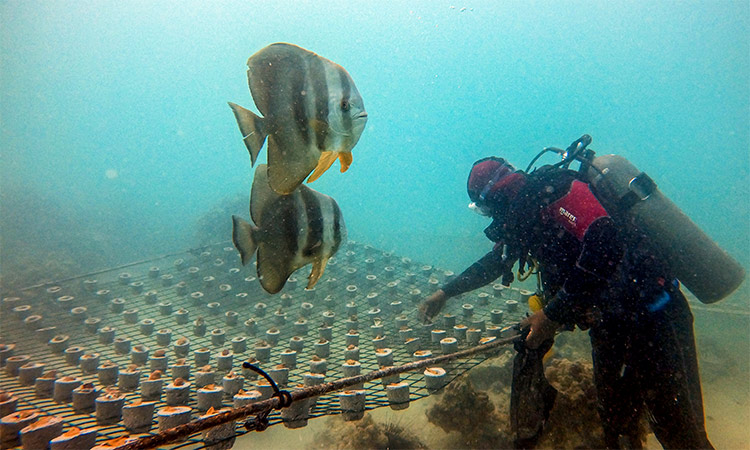 Climate change is stressing our world’s environmental balance. In this context it is very important to study our biodiversity.

Humans are privileged to be living in a planet that consists of water in 70% of its area.

The climate crisis jeopardises the oceans and biodiversity, especially with the fact that oceans absorb nearly 30 per cent of the carbon dioxide humans produce and reduce the effects of global warming, a United Arab Emirates University professor pointed out.

As part of its celebration of World Oceans Day under the theme ‘The Ocean: Life and Livelihoods’, the Ministry of Climate Change and Environment (MOCCAE) announced the launch of a bio-digital survey of marine habitat in the UAE.

For the first time in the region, the 17-week pilot study will integrate aerial and underwater data, collected using drones and an underwater remotely operated vehicle (ROV) - a mobile robot designed for aquatic work environment.

The pilot phase will take place in the coastal area of Umm Al Quwain, given its widely diverse terrain and marine habitat, such as coral reefs, seagrass meadows, and natural creeks.

Talking of coral reefs, the climate change-induced rise in seawater temperature is a key driver of marine ecosystem degradation. Coral bleaching is a prime example, as it causes coral reefs to lose their role as vital habitat for marine life.

The launch by Sheikh Hamdan Bin Zayed Al Nahyan, Ruler’s Representative in Al Dhafra Region, and Chairman of the Board of Directors of the Environment Agency - Abu Dhabi (EAD), of the largest coral reef rehabilitation project in the region is truly praiseworthy. The project includes more than a million colonies of coral reef through a replanting programme, to increase the emirate’s total coral reef area.

The launch coincides with the World Oceans Day.

Coral reefs are considered one of the most important and productive marine habitats. The reefs support biological diversity in the Emirate of Abu Dhabi and provide a natural habitat for many types of fish and marine life, in addition to their role in protecting beaches from erosion, and supporting fisheries and many recreational and tourism activities in Abu Dhabi.

The Emirate of Abu Dhabi contains 34 different types of hard corals spread in several locations, including Ras Ghanada, Butinah, Saadiyat and Alnouf. Through this programme, nurseries for coral will be developed to reduce the negative impact of the natural pressures to which coral reefs are subjected due to climate change and high temperatures on the sea floor.

The UAE Government has long realised that the country is blessed with rich marine biodiversity and assigned a great importance to preserving it and ensuring its sustainability.

Oceans are also key to the global economy, with an estimated 40 million people working in ocean-based industries by 2030.

The preservation of coastal areas and oceans – of which dugongs and seagrasses are key and fragile components – is of paramount importance. Environment Agency – Abu Dhabi (EAD) has announced that an online toolkit to support dugong and seagrass conservation has been selected as one of the 25 most noteworthy innovations in the UAE’s Government sector by the Mohammed Bin Rashid Centre for Government Innovation.

As Sheikh Nahyan Bin Mubarak Al Nahyan, Minister for Tolerance and Co-Existence, said, “Sheikh Zayed told us: ‘We cherish our environment because it is an integral part of our country, our history and our heritage, If we fail to protect it, our children, rightly, will reproach us for squandering an essential part of their inheritance.’

“As our world faces the challenges of climate change, it is increasingly important that we encourage the study of our biodiversity, here in the UAE and on a global scale,” he says.