Have Harry and Meghan got what they wanted? - GulfToday

Have Harry and Meghan got what they wanted? 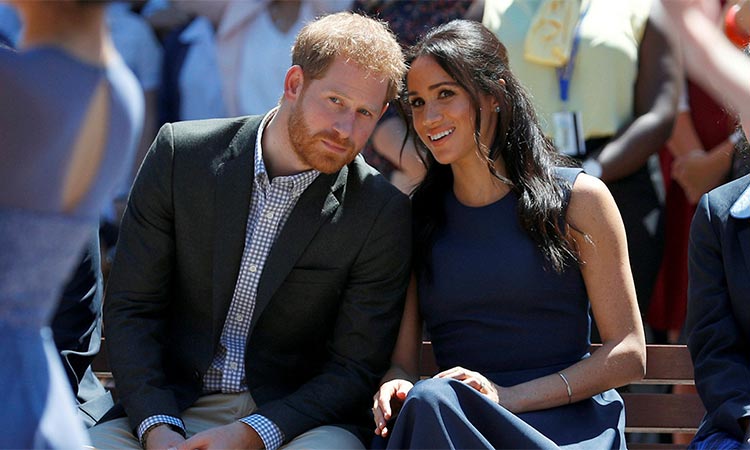 Prince Harry and Meghan Markle during a public interaction in London. File/Reuters

On May 19, 2018, Meghan Markle walked down the aisle at St George’s chapel towards her place in royal history. Her much-anticipated wedding to Prince Harry was a mixture of regal fanfare and personal touches, as well as having both very public and totally private moments. At the time, it appeared to perfectly set the tone for the royal working roles that the Duke and Duchess of Sussex were expected to hold for decades to come.

Fast forward three years and Harry and Meghan have indeed made their mark — by totally rewriting the royal fairytale. The age-old narrative of a handsome prince sweeping his bride off her feet and into his world has been spectacularly subverted as the couple turned their backs on royal life and set up home in California — with Harry sounding very much like he believes he has been rescued.

Since forging ahead with their plans to completely walk away (which they decided to do once it was made clear that they could not have the half in half out model they initially wanted), the couple seem to have achieved much of what they hoped. Although, with Harry recently admitting that his time in LA has felt like a “feeding frenzy”, with helicopters, drones and “paparazzi cutting the fence” and the pair dogged by endless criticism over “cashing-in” on their royal fame, the question remains; have they really found their freedom?

Despite Harry’s frustration at photographers near their Santa Barbara home (something surely less likely to happen at an official royal residence), the Prince recently described his situation to Armchair Expert podcast hosts as “a bit more free”. Central to this viewpoint seems to be a feeling of having taken control by exiting what he perceives as an “invisible contract” between the monarchy and the British media.

It is a reminder of what was at the heart of the Sussexes’ decision to leave — the fact that they could never, as publicly-funded working royals, pick and choose which media they gave access to (no matter how much they despised them).

This resentment had long been simmering with Harry — see his official statement on the press treatment of then-girlfriend Meghan in 2016 — but reached boiling point with the arrival of his son, Archie. The idea of parading their child before those they blamed for their misery was clearly eating away at them. It was much-debated when they didn’t do a large-scale photo call after their son’s birth, allow any press for arrivals at his christening, or make public the name of his godparents. Today, as the couple await the arrival of their second child, it is easy to see how Harry’s verdict that they are “more free” to do as they please rings true.

Despite intense media interest in their daughter, there is no such expectation for the couple to release images, names, or even announce the birth as soon as it happens. Even the month their baby is due remains unknown. Whether or not they do these things is totally on their terms.

Of course, the risk of unsolicited photographs being taken, and published, remains. But Harry and Meghan have already demonstrated that they are prepared to go into battle over their privacy, and have scored some significant wins in the last couple of years in a bid to draw their own lines.

Meghan’s court victory against the publishers of the Mail on Sunday, after a long conflict that many thought she might give up on, was the most notable. Before that, she settled a claim with Splash News over images of her and Archie, with the photography agency agreeing not to take any future pictures. Other cases are pending, and Harry and Meghan’s passion for this fight shows no sign of abating.

Their critics frequently cry hypocrisy whenever the couple seek attention or publicity for their work or open up about their lives. But the Sussexes are by no means the only high-profile individuals to reject the idea that anyone but them should call the shots on what they share.

Despite what is often claimed about them seeking a life totally out of the spotlight, it was always a different kind of public life they were after. The duke and duchess wanted more autonomy and the ability to choose who they gave access to. There can be no question they have secured this; but does that truly equate to freedom and, indeed, control?

From the outside it is hard to see how it’s possible for the Sussexes to be the only ones pulling the strings if they need to earn a living. Yes, they have severed ties with the public purse, but Netflix, Spotify and Apple TV now all have a stake in their performance.

And while Harry and Meghan can decide what they put out into the world, they cannot control how people perceive it. They and their supporters may find the criticism grossly unfair, but polls in the UK suggest there are still a lot of people they are not winning over. The couple is also unlikely ever to be completely free from accusations of cashing in from some quarters.

Even if they were to stop using their Sussex titles (the only link left that can still be removed), there will always be those ready to say that they are monetising “royalness” simply because their international profiles exist by being royal.

Whatever ties may remain, however, there can be no mistaking their feeling of liberation. Harry told Oprah he pities his “trapped” father and brother, and has likened royal life to a “zoo”. His desire to share his feelings, despite the fact that he knows better than anyone how his every word can be seized on, is an openness that we have become unused to routinely seeing from our royals.

As with so much of what the Sussexes do, it has polarised opinion. Harry has been praised for his willingness to be frank about his struggles. But he has also been criticised for the impact his comments have on other family members who have largely remained silent. Could he one day come to view his words in a different light? It was Prince William who observed of Princess Diana’s decision to give her landmark Panorama interview: “Once you’ve opened that door you can never close it again.”

Three years ago, Diana’s sons stood side by side. Harry as groom and William as his best man. Today they are an ocean apart and deep family divisions have been laid bare. There is an irony then in Harry’s own words just a few months before his wedding, in February 2018, when the ‘Fab Four’ hosted a conference for their joint foundation: “Working as a family does have its challenges, of course it does. But we’re stuck together for the rest of our lives”. Harry and Meghan have taken huge strides in the last three years to forge an independent path yet so much of his statement remains true.