Republicans will lose, if they can’t be honest - GulfToday

Republicans will lose, if they can’t be honest 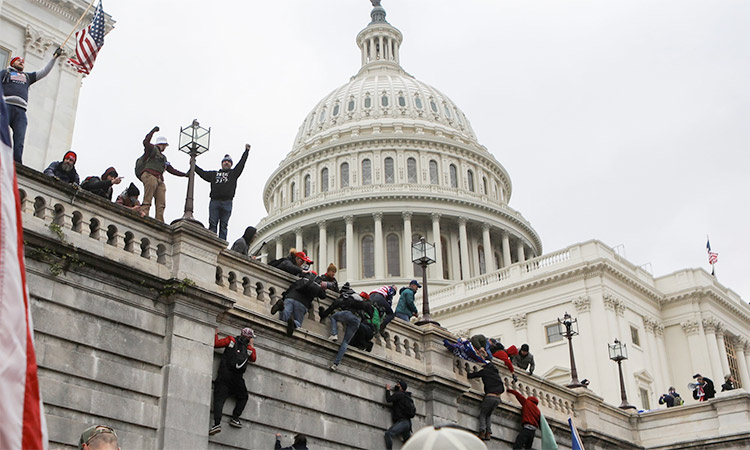 Donald Trump’s supporters take over the compound of the US Capitol. File/Reuters


During a House hearing about the attack on the US Capitol, US Rep. Andrew Clyde read from a prepared statement to take issue with people calling the assault “an insurrection.”

“There was no insurrection,” the freshman Republican from Athens, Georgia, said. “And to call it an insurrection, in my opinion, is a bold-faced lie.”

The congressman went on to say that video from that day showed people walking through the main floor of the Capitol in an orderly fashion. “If you didn’t know the TV footage was a video from January the sixth, you’d actually think it was a normal tourist visit,” he said

The vice president was evacuated by the Secret Service. My colleague was in hiding with a gas mask. More than 400 people have been arrested for their crimes that day.

But it’s also part of a bizarre pattern of lies, large and small and sometimes for no reason at all, coming from some supporters of former President Donald Trump and from Trump himself.

The election was stolen. The insurrection never happened. Donald Trump should still be the president. None of that is true.

The first thing I noticed when I began covering the Trump campaign as a reporter in 2015 was that members of his staff lied about almost everything, even about things that were totally unnecessary.

Late in 2015, the campaign announced that a group of 100 Black preachers would endorse Trump at a Monday press conference. When I contacted the ministers, the first question was, “What press conference?”

Eventually, nothing the campaign said could be taken as fact. And that was before he was elected.

Over time the small lies became big lies. And the big lies became dangerous. There’s no need to rewrite the last six months of history here, but suffice it to say Donald Trump did not win the Georgia election in 2020, even if he says he did.

That cost his fellow Republicans two Senate seats and control of the US Senate. But it has not cost Trump the loyalty of the voters here who still believe in him, nor of the politicians who need those voters to stay in power, too.

Rep. Clyde is only the latest Trump-supporting member of Congress to say something false about what we all know to be true.

House Minority Leader Kevin McCarthy, who blamed Trump in January for the attack on the Capitol, said at the White House on Wednesday, “I don’t think anybody is questioning the legitimacy of the presidential election. I think that is all over with.”

Somebody forgot to tell that to US Rep. Jody Hice, who just sent a three-page letter to conservatives to say that the 2020 election was beset by “systemic voting irregularities and fraud” and called Secretary of State Brad Raffensperger a “back-stabbing” Republican for refusing Trump’s demand to overturn the results. Hice has announced plans to run against Raffensperger.

When I’ve asked people at Trump’s events if his dishonesty bothered them, a constant refrain has been, “They all lie.”

But they don’t all lie, not like this. Gov. Brian Kemp wasn’t lying when he upheld the results of the Georgia election, even though it would have been better for his politics to do the opposite.

But there’s a deeper problem for Republicans going forward than the dishonesty among some of their leaders.

When parties lose an election, a debate almost always follows between a faction that believes the party’s ideas need to change and another faction that says the party’s message should change, while their ideas can remain the same.

Republicans had that debate internally when John McCain lost in 2008. Democrats had the same internal struggle after Hillary Clinton lost in 2016.

But if a party can delude itself into believing that they didn’t really lose an election in the first place, that it was rigged or stolen or taken away, then nothing needs to change.

Republicans won’t be able to win the next election if they can’t be honest about what happened in the last one. And that, Mr. Clyde, is the truth.

Acquittal of Trump not a surprise

The US Senate acquittal of Donald Trump was on expected lines. This was Trump’s second impeachment trial in a year, with fellow Republicans blocking conviction over the former president’s role in the deadly assault by his supporters on the US

Over the past few days the nation has seen Donald J. Trump at his feral worst — and his most dangerous. The man has never been fit for the office — his personality flaws alone should have disqualified him — and as his term nears its end, his petulant egoism and lack of