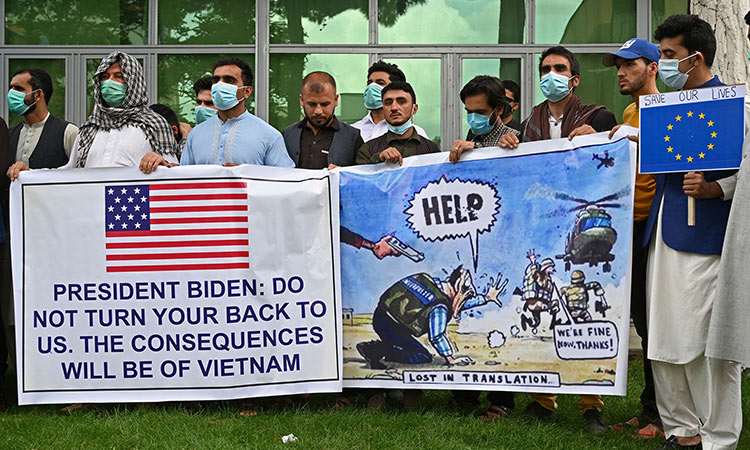 Former Afghan interpreters for the US and NATO forces gather during a demonstration in downtown Kabul on the eve of the beginning of Washington’s formal withdrawal. File/Tribune News Service

He was eventually granted a visa and moved to the US in 2014. He’s since helped other special immigrant visa applicants through an advocacy group called ‘No One Left Behind’.

But Khan’s deeply distressed about what will happen to people like him once the US completely withdraws from Afghanistan by September. The Afghan Special Immigrant Visa Program, established in 2009 to provide a safe haven for Afghans who worked for the US government, is beset by delays, facing a backlog of several thousand applications. The law requires visa applications to be processed within nine months, but current wait times stretch for years.

That’s not enough time for Afghans who risk persecution or death at the hands of the Taliban when US troops leave. And lawmakers, including veterans who served in Afghanistan, have started to sound the alarm.

“The people reaching out to me are in a state of full panic,” said Rep. Michael Waltz who did multiple combat tours in Afghanistan, the Middle East and Africa. “They are afraid, not just for their lives but for their family’s lives, and are reminding us that they stood with us at great risk against extremists. And they feel utterly abandoned.”

In April, a bipartisan group of 16 lawmakers wrote a letter to the White House, pressing the Biden administration to expedite processing for the Afghan SIV programme. The members also pledged to start a working group to coordinate White House engagement.

“There are thousands of these folks who knew what they were getting into and took on great risk to themselves and their families to serve with us, and we cannot leave them behind,” said the top Democrat on the letter, Rep. Jason Crow, who served in Afghanistan as part of the Joint Special Operations Task Force.

The fiscal 2021 omnibus appropriations bill, signed into law in December, authorised 4,000 additional Afghan visas, bringing the total number to 26,500 visas authorized since 2014. Crow said there are about 18,000 applications waiting, a number he expects to rapidly rise.

But the pace of approval is slow. According to the most recent quarterly report for the programme, just 237 principal visa applications were granted in the last three months of 2020, plus 1,084 more for family members.

Longstanding issues: The Afghan SIV program was struggling long before the troop withdrawal announcement heightened the urgency of granting visas. In 2020, a State Department inspector general report laid bare a myriad of issues with the programme, from staffing shortages to a lack of a centralized database to insufficient protection for visa applicants outside their workplaces.

The White House has made some moves to fix the problem. In a February executive order, President Joe Biden directed the State Department to review the Afghan SIV program and submit a report within 180 days that includes an “assessment of whether there are undue delays in meeting statutory benchmarks for timely adjudication of applications, including due to insufficient staffing levels.”

Waltz said a diminishing military presence in Afghanistan forces applicants to travel long distances with their necessary documentation, increasing the risk of being stopped by the Taliban. Applicants must pass a medical exam and provide a letter of recommendation from their former supervisor, who they may not have had contact with for years.

The program has also been hamstrung by Trump-era “extreme vetting” requirements making it difficult for any immigrant from a majority-Muslim nation to obtain a visa, said Adam Bates, policy counsel at the International Refugee Assistance Project.

“We see so many applications that go into what’s called the interagency checks that just languish there,” Bates said. “They’re not even being rejected, they’re just sitting in processing for years and years.”

A State Department spokesperson said that the government is “engaged at the highest levels to ensure we are serving SIV applicants as promptly as possible.”

“The Biden Administration is committed to supporting those who have helped US military and other government personnel perform their duties, often at great personal risk to themselves and their families,” the spokesperson said. “Everyone involved in the Special Immigrant Visa process, whether in Washington or at our embassy in Kabul, is aware of the threats our Afghan colleagues face.”

Beyond SIVs: Lawmakers and advocates also worry about Afghans who wouldn’t qualify for special immigrant visas but could still face threats in an unstable Afghanistan after the US withdraws.

“There are an awful lot of civic leaders, community leaders, women’s rights leaders and others who have done amazing work, but whose lives will be in great danger after our withdrawal,” Crow said.

They’re hoping the Biden administration will expand the refugee admissions program to help that population. Biden initially promised a raise to the historically low Trump-era refugee cap of 15,000 to 62,500, but later announced he would maintain that level. After receiving blowback from Democrats and advocates, he’s expected to increase the cap in the coming weeks.

If that’s not sufficient, advocates say, it’s time for the government to consider more drastic moves, such as military evacuations of vulnerable Afghans. It wouldn’t be the first time the US has conducted such an operation when leaving a war zone: after the Vietnam War ended, the US evacuated thousands of Vietnamese refugees to Guam, where they were processed for resettlement.

“It’s not a question of whether the US has the resources to do this,” Bates said. “It’s just a question of the will — the political will of the Biden administration and Congress to do the right thing.”

Every day, Khan gets emails and calls from people he knows in Afghanistan who are desperately trying to get special immigrant visas before US forces withdraw. He says many can live with the personal risk that comes with aiding the US, but can’t stand the thought of their families in danger.

The impact of a sluggish SIV program wouldn’t be limited to humanitarian consequences for Afghan interpreters, contractors, other employees and their families. If the US fails to adequately protect its military partners when it withdraws from a conflict, future allies could be less willing to cooperate with the US military, undermining national security interests.

“No one is going to be that stupid to do that again in the future,” Khan said. “The entire world is looking.”