Water crisis at the heart of India’s farm protests - GulfToday

Water crisis at the heart of India’s farm protests 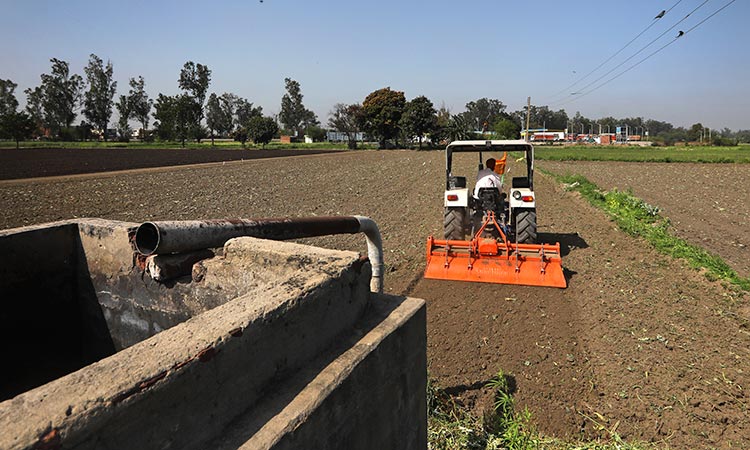 A farmer uses a tractor to plough his field at Fatehgarh Sahib, Punjab. Associated Press

Every year, Swarn Singh sows rice in his fields, knowing that the thirsty crop is draining northern India’s Punjab of its groundwater. But Singh says he has no choice, adding, “We’d rather plant crops that need less water.”

The 32-year-old farmer and school teacher lives in Ransih Kalan village in the state’s Moga district, where green fields surrounding its wide roads and large houses belie the reality that the region is among India’s most parched and its once-prosperous agricultural system is now broken.

India’s water crisis looms over an agrarian crisis that has been brewing for decades. At its heart is a conundrum: the government has been subsidizing the cultivation of rice in northern India, but such water-intensive crops have dramatically lowered the groundwater table.

Singh says his village’s farmers agree changes are needed but fear these laws will only make matters worse, leaving them at the mercy of big corporations. The laws don’t address the region’s water crisis. But Singh said that if guaranteed prices for all crops were to become a legal right, farmers would shift away from thirsty crops.

Home to a fifth of the world’s population, India has only 4% of the world’s water. But the country is the largest extractor of groundwater in the world, with 90% used for agriculture.

Nowhere is the water shortage more pronounced than in Punjab, where India’s government encouraged cultivation of wheat and rice in the 1960s and has since been buying the staples at fixed prices to shore up national reserves.

Wheat was a traditional crop, along with mung beans or peanuts, said Singh’s father, Bhupinder Singh, 62. But he and experts say a pound of rice needs up to 500 gallons (2,273 liters) of water — and irrigation canals couldn’t supply enough as more farmers switched to the grain.

But groundwater levels plummeted as underground pumps proliferated, with over 1.2 million by 2012. And a 2017 federal report warned that the state of 27 million people would exhaust its groundwater by 2039.

The looming calamity isn’t news to the Singhs. They had to spend $6,600 to install a pump for a nearly 200-foot (60-meter) borehole. And successive years of planting the same crops leached their village’s soil of nutrients, forcing them to rely on expensive fertilizers.

Rising costs have forced the family into debt, and the certainty of selling to their crops to the government is their only way of staying afloat. “All of Punjab is trapped,” the son said.

Protesting farmers fear the new laws signal that the government wants to reduce its role in agriculture and that guaranteed prices for their crops will end.

The government does fix prices for crops other than wheat and rice, including corn. But Aulakh said these products aren’t purchased for federal reserves and traders in the private market pay much lower prices for them, resulting in farmers feeling “cheated.”

Aulakh, who has sat on government committees that discussed crop diversification in Punjab, said farmers would switch to more suitable crops if they knew they’d be compensated by the government. “We can’t blame the farmers,” he said.

India’s agricultural and water ministries did not respond to emailed requests for comment.

More than 86 per cent of India’s farmers work on less than than 2 hectares (4.9 acres). So the falling groundwater table means these small farmers spend increasingly more money to pump water for their crops and this is widening inequity, said Balsher Singh Sidhu, a University of British Columbia doctoral student studying climate change impacts on agriculture.

Sidhu compared the available groundwater to a bank account where withdrawals far exceed deposits. “Today everyone has access to water, but we can’t say the same about tomorrow,” he said.

Climate change has made the monsoon rains — a lifeline for over half of India’s cultivated area — unpredictable and left farmers even more reliant on groundwater. Rice requires standing water in fields. But hotter summers are increasing the amount lost due to evaporation.

Rice farmer Mahinder Singh, 73, said he tried planting corn once but private buyers paid him only a fraction of the prices set by the government. “We will die of hunger,” if the water runs out, he added.

India’s food reserves are overflowing, leading to waste, but malnutrition is intensifying and experts fear future water shortages could make it worse.

“The richer people can afford to (buy) fruits and vegetables,” said Upmanu Lall, director of the Columbia Water Center at Columbia University. “Poor people do not, other than what they can scavenge.”

Residents of Ransih Kalan have begun taking steps to conserve water. Villagers have installed a sewage treatment plant, and the treated water is used for irrigation. They’ve also built plants to harvest rainwater and divert it into a man-made lake. In the middle is a 10-foot tall (3 meters) statue of a dinosaur.

It’s a reminder, says Preet Inderpal Singh, the 30-year-old village headman, “That if people don’t save every drop of water, people would become extinct, like dinosaurs.” 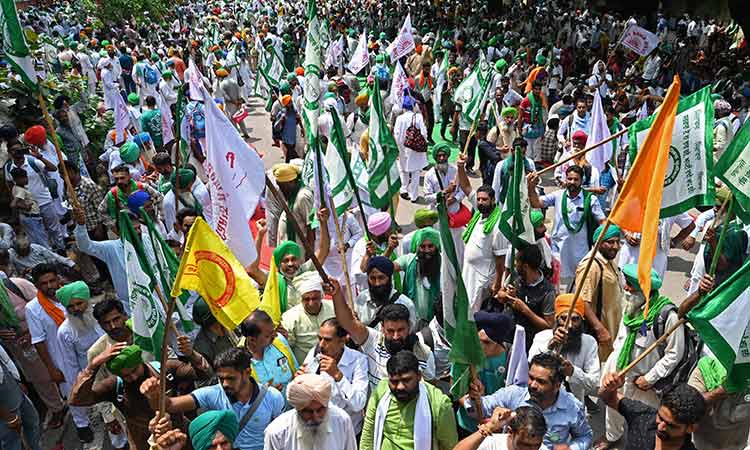 More than eight months after farmers called off a year-long protest and the government conceded to several of their demands, more than 5,000 farmers gathered in the centre of the capital to protest against Modi and his government.