What young people need to know about COVID - GulfToday 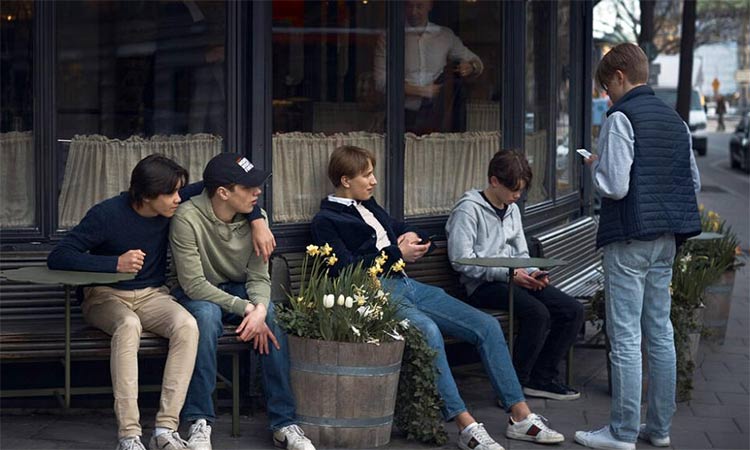 Youth hang out outside a restaurant in Stockholm, Sweden. Associated Press

I was once attacked by someone in The Spectator for my hopelessly unrealistic progressive opinions, and thus characterised as “a millennial”. This was doubly satisfying, because I do like to think of myself as “woke”, and I’m old enough to be the parent – if not grandparent – of a millennial.

In that spirit, then, I’d like to place myself in the position of someone rather younger than me, faced with the decision to get vaccinated. The 45- to 50-year-old cohort (kids to me) are about to receive their invitations, and to make their own risk-benefit analysis.

Not since an elaborately moustachioed Lord Kitchener stared out from the posters with the command, “BRITONS. YOUR COUNTRY NEEDS YOU. JOIN YOUR COUNTRY’S ARMY!” has an appeal to the national interest had much effect (perhaps because so many patriotic youths were sent to their certain deaths on the Western Front after they rallied to the flag). Much better, I think, to press the selfish case for vaccination on the kids of today.

It is to be admitted that the case rate and the death figures for the, say, under-40s, are enviably good; and especially so for those with no underlying conditions. There are well-documented cases of young people dying of COVID, but these are the exception. Most seem not to be able to smell their home cooking for a while, or get a bit of a cough, and that’s that.

They can’t even get up a flight of stairs, let alone boogie the night away – and gasping for air is never going to be a “good look”. Family life and the chances of holding down a job will be that much less with long COVID, and as for your quality of life, well, it’s pretty obvious how devastated that’s going to get.

It is gruesome stuff. A report in the BMJ described preliminary reports of a study of people with median age 44, and no comorbidities. It found: “The most commonly reported ongoing symptoms – regardless of hospitalisation status – were fatigue (98 per cent), muscle ache (88 per cent), shortness of breath (87 per cent), and headache (83 per cent). There was evidence of mild organ impairment in the heart (32 per cent of patients), lungs (33 per cent), kidneys (12 per cent), liver (10 per cent), pancreas (17 per cent), and spleen (6 per cent).” Take your pick.

By the way, even vanilla, everyday COVID is no fun, and not every younger person escapes with an asymptomatic or trivial dose. Even what the experts call “mild” or “moderate” COVID will be about 489 times worse than the very worst hangover you’ve ever had, and it’ll drag on for weeks and scare the wits out of you. A jab is a pretty good way to moderate that misery rather more.

Next up: mutants. Common sense and a glancing familiarity with evolution tells us that the virus evolves to survive and seek new hosts as fast as it can. Its current taste for vulnerable old meat will probably start to widen to previously lightly touched cohorts, even down to children. It might not happen, but there is no scientific reason why it would not, and why would anyone want to be the guinea pig for a real life trial of the latest “variant of concern” that targets Gen Z? The vaccine is your friend, even if it is only partially effective against new mutations.

Last, you will be doing your bit for your generation (and yourself) by helping ensure there won’t be any more lockdowns. Necessary as they have been, they have decimated the educational and social development of students, irretrievably – and blighted their life chances as a result.

If vaccination rates slump too low, then fresh waves of COVID are more likely – and so are depressing lockdowns to try and control any outbreaks. Any jab must surely be preferable to that, mustn’t it?