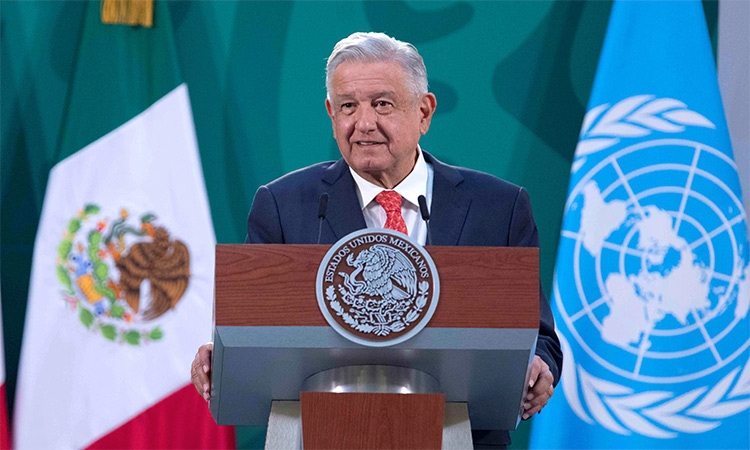 Juan Manuel Briones was 14 when he started working in the coal mines in this remote stretch of northern Mexico.

He toiled underground for nearly two decades, only to be laid off a few years ago as Mexico began embracing renewable energy and weaning itself off fossil fuels.

Briones worried the future had left him behind.

Then, President Andres Manuel Lopez Obrador took office in late 2018 and started turning back the clock.

The president has halted new renewable projects, mocked wind farms as “fans” that blight the landscape, and poured money into state oil company PetroleosMexicanos, including $9 billion for construction of a new refinery. Last month, he pushed legislation that requires that the energy grid first take power from state-run plants — fuelled in large part by crude oil and coal — before less expensive wind and solar energy.

Shortly after the president announced last summer that his government would again start buying coal from Mexico’s producers, Briones was called back to work.

“We need this to continue,” he said on a recent morning, covered in soot and puffing on a cigarette after finishing a shift 300 feet below ground. “Coal is what we live from.”

Lopez Obrador’s devotion to fossil fuels and rejection of cleaner energy at a time when most nations are moving in the opposite direction has dismayed environmentalists, who warn that Mexico will be unable to meet its emission reduction commitments under the Paris climate agreement, as well as business leaders, who warn that energy costs will rise because coal and gas cost about twice as much as wind and solar.

Experts say his policies are rooted less in climate change denialism and more in nationalism and nostalgia. A populist, LópezObrador is playing on Mexico’s proud history as a fossil fuel powerhouse.

He grew up in the oil-rich Tabasco state in the decades after President Lazaro Cardenas expropriated the assets of foreign energy companies operating in Mexico and nationalized the country’s oil reserves and mineral wealth. For decades, the state-owned oil company, known as Pemex, was a main driver of Mexico’s economy.

It remained part of national lore even as mismanagement and an aging infrastructure eventually eroded the country’s position as a top oil producer. In 2013, then-President Enrique Pena Nieto pushed through a constitutional reform that ended the state monopoly, opening up Mexico’s oil and energy sector to private companies. Foreign firms flooded in, and a competitive bidding process drove costs for natural gas and renewable energy to some of the lowest prices globally.

Lopez Obrador has accused foreign-owned companies of stealing market share away from Pemex and the state electric company, the Federal Electricity Commission.

Lisa Viscidi, an energy expert at the US-based think tank Inter-American Dialogue, said the president’s goal is to “return their monopolies” by bringing the energy sector under state control — even if that means promoting dirtier fossil fuels and contributing more carbon emissions.

“All of these things have been sacrificed for the goal of energy sovereignty,” she said.

Dozens of renewable energy companies have filed lawsuits to halt the changes, which they say unfairly push them out. With many of his policies in legal limbo, Lopez Obrador has said he may introduce a constitutional amendment to achieve his goals. It wasn’t long ago that Mexico was being lauded as a global leader in fighting climate change.

In 2012, Mexico became one of the first countries to pass climate change legislation, and in 2017 it joined a coalition of governments committed to phasing out coal-fired electricity by 2030.

It was also the first developing nation to submit its plan to lower emissions under the Paris agreement and the first in Latin America to ratify the historic accord. Every five years members of the Paris agreement are expected to raise their targets for cutting CO2 emissions. But last year, under Lopez Obrador, Mexico declined to boost its target, maintaining its original commitment of cutting greenhouse gas emissions by 22% by 2030 compared with how much it would be releasing if it had done nothing at all.

And while Mexico produces just 1% of the world’s greenhouse gases, environmentalists say it’s important that it pulls its weight, in part because it will set an example in the region.

“It does matter what Mexico does,” said Carolina Herrera, a Latin America analyst with the Natural Resources Defense Council. Ironically, Lopez Obrador’s biggest constituency, the working class, may suffer the most from droughts, floods and other effects of a warming climate.

“The people who Lopez Obrador says he’s looking out for are the ones who are going to be really vulnerable,” Herrera said. But the president seems to relish his role as a climate pariah. He has dismissed concerns about the environmental impacts of his plans as “sophistry” from his political opponents and the nation’s elite.

“Since when are conservatives concerned about the environment?” he said in January at one of his daily news conferences. “They have seized the flag of clean energy in the same way they seized the flag of feminism or human rights.”

Speaking last fall at the reactivation of a coal plant in northern Coahuila, he lashed out at several dozen US lawmakers who had published a letter criticizing his energy policies for favouring Mexico’s state companies.

“I am very happy to be here ... to tell those who defend neoliberal policy that we are not going to retreat one step,” he said.

His cause was unexpectedly boosted in February, when a winter storm knocked out power in Texas. The state’s governor barred natural gas exports, leaving more than 4 million people without electricity in Mexico, which relies heavily on natural gas from the US.

Lopez Obrador said it was a clear signal: “We must produce.” That is a welcome message in Coahuila, where coal production, which began at the end of the 19th century, has become synonymous with prosperity.

Sabinas, the capital of the state’s coal country, is home to a golf course and pricey steakhouses blasting country music by the likes of George Strait. The city’s very future seemed in jeopardy when the government turned toward renewables, said

BogarMontemayor, the president of the Mexican Union of Coal Producers. “Coal mining is what people know here,” he said. “It’s what they’ve done for generations.”

Montemayor said that he understands the calls to increase renewable energy and that “it’s welcome here” — but that coal and other fossil fuels deserve a place, too. “We need to find a balance where we all fit,” he said.

On a recent afternoon, he climbed into his pickup truck and drove out to one of the mines that belongs to his association.

The highway was filled with tractor-trailers filled with mounds of coal, headed for two nearby power plants, part of the 2 million tons of thermal coal that Lopez Obrador has vowed to purchase this year from the region.

After an hour of driving through mesquite- and cactus-dotted desert, he arrived at the Santa Catarina mine, where an electronic belt carried dusty chunks of coal stripped from the earth by miners underground with air-powered guns.

The mine closed last year after coal orders fell. It reopened in January when the president vowed to buy again. “We’re coming back to life,” said Juan Olvera, 63, the safety manager at the plant, as he greeted filthy, sweaty workers who were finishing up their shifts with pats on the back.

That morning, he said, a dozen men had shown up, looking for work. They were all hired on the spot.