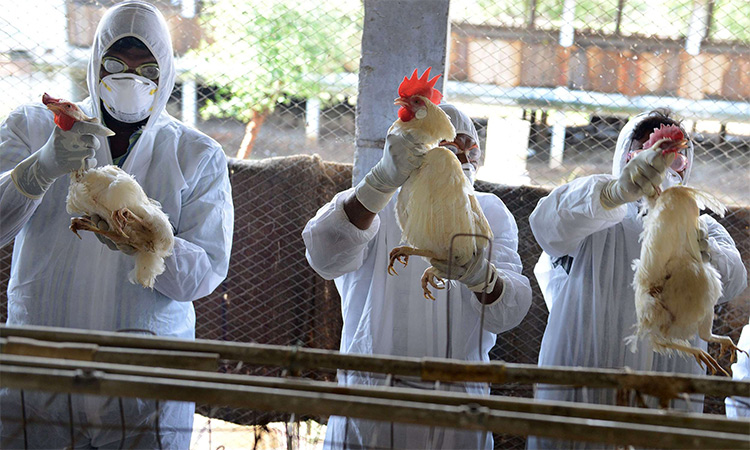 Indian health workers culling chickens infected with avian influenza virus H5N1 in 2015. That strain of the virus could be transmitted from birds to humans and re-emerged aggressively worldwide. File/Reuters

Towards the end of 2020 and early 2021, avian or bird flu swept through India and affected states scrambled to institute measures to control the spread of the disease.

A report by Mongabay-India points out that the 2020/2021 outbreak, marked by the significant involvement and mortality of wild birds, has spotlighted the need for proactive monitoring of animal disease in the environment, conserving unprotected wetland habitats to curb disease spread, and addressing knowledge gaps like the wild waterfowl–poultry interface.

Avian Influenza (AI) is a highly contagious viral disease that affects both domestic and wild birds. AI occurs worldwide, and different strains are more prevalent in certain areas of the world than others. The World Organisation for Animal Health states that wild aquatic birds, such as geese, shorebirds, and wild ducks, are the natural reservoirs of Influenza A viruses. AI viruses are broadly classified as low pathogenic AI (LPAI) and highly pathogenic AI (HPAI) viruses, based on their pathogenicity.

As the Mongabay-India report states, the latest bird flu outbreak in poultry and wild birds spanned 14 Indian states / Union Territories from Jammu and Kashmir in the north to Kerala in the south. Haryana, Maharashtra, Punjab, and Kerala were particularly severely affected. The latest outbreak involved highly pathogenic viral strains H5N1 and H5N8, according to Indian government sources. Regular monitoring of wild aquatic birds and the wild bird-poultry-wetland interface is essential to understanding avian influenza viruses’ prevalence. Proactively enhancing monitoring of wild bird and animal disease in the environment can serve as an early warning system of change/arrival of potential diseases.

The report also highlights that India has emerged as a global hotspot for HPAI H5N1, while also providing critical wintering habitat for many species of migratory waterfowl and year-round habitat for several resident waterfowl species. The country lies at the heart of Central Asian Flyway (CAF), which spans 30 countries and covers 279 populations of 182 migratory waterbird species that rely on wetlands along the flyway, including the Pong Dam wetlands (Pong Lake Wildlife Sanctuary), a Ramsar site, where large-scale mortalities of long-distance migratory birds such as bar-headed geese, first alerted biologists in December 2020.

An Indian Express article explains how bird flu spreads. The virus was first reported in geese in China in 1996. Since then, outbreaks have been reported periodically across the world. Wild aquatic birds such as ducks and geese are the central players in the ecology of these viruses. Many birds carry the flu without developing sickness, and shed it in their droppings. From water birds, many of whom migrate and travel long distances, the viruses are thus further spread to poultry and terrestrial birds. Sometimes, the virus jumps over to mammals such as pigs, horses, cats and dogs.

Though it does not spread easily to humans, generally, people coming in close contact with infected alive or dead birds have contracted the H5N1 bird flu. It is severe and deadly and can jump species and infect humans from the infected bird. The first case of H5N1 infection in humans was reported in Hong Kong in 1997, when a poultry farm worker caught the infection from infected birds. The high mortality rate in humans – almost 60% per cent – is the main cause of concern about the spread of bird flu. In its present form, human-to-human infection is not known – human infections have been reported only among people who have handled infected birds or carcasses.

But around 6 out of 10 confirmed cases in humans have led to deaths (though the actual mortality rate may be lower due to under-reporting of asymptomatic cases).Reuters reports that the feared H5N1 caused the deaths of nearly 400 people and hundreds of millions of poultry after it spread from Asia into Europe and Africa in 2005-2006.

If the virus mutates and becomes easily transmissible from person to person, say by altering its shape to grab human cells much more effectively, it can potentially cause a pandemic. Also, flu viruses are more prone to mutation because they have a segmented genome. All known strains of flu – including the seasonal flu and the pandemic flu – have jumped from birds to humans in this way.

The World Health Organisation, however, says that it does not usually spread from person to person and there is also no evidence that the disease can be spread to people through properly prepared and cooked poultry food. The virus is sensitive to heat, and dies in cooking temperatures.