All COVID theories point to the same solution - GulfToday

All COVID theories point to the same solution 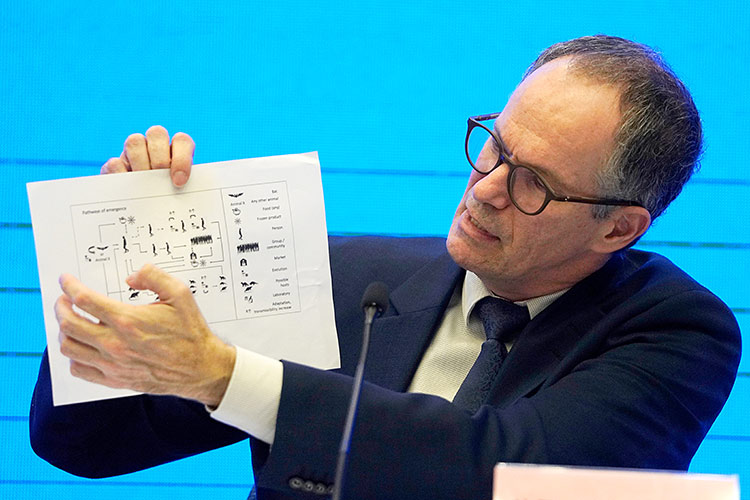 Peter Ben Embarek of the World Health Organisation (WHO) team holds up a chart showing pathways of transmission of the virus during a news conference at the end of the WHO mission in Wuhan. File/Associated Press

Conclusions from the highly anticipated World Health Organisation (WHO) report on the origin of COVID-19 have been revealed, pointing to exotic animals farmed for trade as the most likely source of the virus, while a chorus of detractors continue pushing the theory that the real leak may have been from a Chinese lab. These divergent views delay a focused global effort to prevent another pandemic by treating an agreed upon cause. But the most interesting aspect of this endless debate is that all sides actually point toward the same source and, de-facto, the same solution.

Critics of the WHO investigation correctly point out that its team deployed to Wuhan was compelled to collaborate with, and depend on, Chinese officials to conduct their research. This team apparently did not include experts who could forensically examine medical laboratories, and China has also been forced to deny it restricted their access to the lab in question, the Wuhan Institute of Virology. Consequently, we hear strong cries from a variety of sources, casting doubt on the WHO’s findings, and calling for the Chinese to come clean and reveal all. After all, the biggest modern day disaster warrants a thorough and transparent probe.

But whether or not an additional investigation ever takes place, we should be listening now to the WHO team and the countless other experts who agree with them, and waste no more time implementing their recommendations. Because no matter which side you believe, COVID-19 was a zoonotic outbreak. The virus jumped from an animal to a person, whether it was from a lab or a market, suggesting tough, clear decisions need to be made on a global scale.

Let’s pay attention to the lab-leak proponents for a moment. If a new investigation proved them right, it would mean that a bat or bat secretion would have infected a Wuhan lab worker, who would have infected others. Chinese labs, and labs around the world, do in fact use bats and other animals to conduct tests designed to anticipate and prevent new disease transmissions. But it’s important to remember that these “test animals” don’t just show up at the lab on their own. Acquiring them takes effort and costs money. The test specimens –live animals, their saliva, feces or body parts—, are removed from their natural environments and transported to the medical test centers. In the case of bats, researchers visit caves and collect the samples on their own. The animals may be left in their natural homes while their biological prints are collected. Other animals may be removed, bagged and even bred in captivity back at the lab to sustain ongoing experiments. Sometimes, labs lack the time or manpower to complete collection, so they obtain specimens through animal brokers. Either way, the medical community is one of multiple markets for the global wildlife trade that supplies various critters capable of transmitting viruses to people, including bats, rodents, primates and many more.

But we need to experiment on animals to save people, right? Perhaps to some degree, but if you consider that 65 per cent or more of emerging infectious diseases in people today come from animals, we should also be asking if the medical industry’s practices are contributing to a problem that it is trying to solve.

While you consider that for a moment, consider this too: The WHO team included the world’s top scientific experts on emerging infectious diseases and zoonosis. They put their names on this widely read report, risking their professional reputations. They believe the virus was most likely passed from a bat to humans via an intermediary species that was being commercially farmed for human consumption. The middle animal may have been a mink, ferret, raccoon, or other animals from the Mustelidae family that share respiratory features with people and are bred in Chinese farms that are sometimes stocked by cross-border supply chains. Another theory is the intermediary animal was a pangolin (the most heavily trafficked mammal in the world). Either way: this is wildlife trade.

I’m not a scientist. I’m a conservationist who has been surrounded by veterinarians and wildlife biologists for the last 30 years, and two, sometimes frustrating, things I’ve come to learn about them: A, they agonise before assigning their name to a publication; and B, they speak in technical terms, leaving one unclear about their recommendations. The WHO team seems confident and clear with their conclusions. We should hear them out. In fact, if you dig into what the scientific community agrees about emerging infectious diseases it boils down to this: there are more than 1.6 million viruses out there in nature ready to be unleashed, many of which can seriously harm us, if we don’t stop messing with nature.

Whether COVID-19 sprang from a lab bat, a combo of a wild bat and farmed mink or trafficked pangolin, or whatever — the two common factors that cut across each theory are one, people tinkering with wild habitats and two, commercial trade in wild animals. This is not new stuff or a phenomenon unique to China. Conservationists trying to halt the destruction of earth’s biodiversity have long been trying to get the world to look in the mirror. We are doing this to ourselves.

And we can fix it —if we put our political colours aside. Beijing’s critics are hell bent on not letting China off the hook. But we should remember two things as we consider the source and solution: First, COVID-19 did leak from China. The WHO report implies Chinese demand for wildlife was the trigger. Second, China has essentially honed up to this by closing its wildlife trade, for now. They shut down commercial wildlife farms and animal sections of wet markets. While they have allowed part of an animal-based traditional medicine trade to continue, the fact that they put the breaks on a £53bn-a-year industry speaks volumes.

But most importantly: the WHO’s and China’s findings imply that a virus like COVID-19 could be brewing anywhere in the world where commercial trade in wild animals or destruction of wild habitats persist. Mink farms exist across the world, including Europe and North America, while farms breeding civets, raccoons, and other many more suspect species are operating right now across Southeast Asia. China’s wildlife farms occasionally get stocked from suppliers outside the country to maintain their numbers and genetic diversity. We need to re-examine commercial practices that are feeding the fur industry, demand for exotic meats, pets, animal-based medicines and medical experimentation, as well as industrial scale farming that destroys habitat and shoves wild animals into human habitats.

Let’s listen to the WHO experts, and take note of China’s disaster response that has denied income and highly sought commodities to its people. President Xi should listen to conservationists and stay the course. The Chinese government must resist the powerful commercial forces that want to reopen the wildlife trade, and suppress the criminal elements that circumvent its ban.

This year, China hosts the world’s biggest convention on biodiversity where it could announce that its wildlife trade ban is permanent. The world could then follow suit, while boosting investments in nature protection. Pandemics are cross-border in nature, and so must be our response. A global ban on commercial trade in wild animals and a global focus on planetary health will give us the long-term vaccine that we desperately need.