Ever Given, is a mammoth problem for Egypt - GulfToday 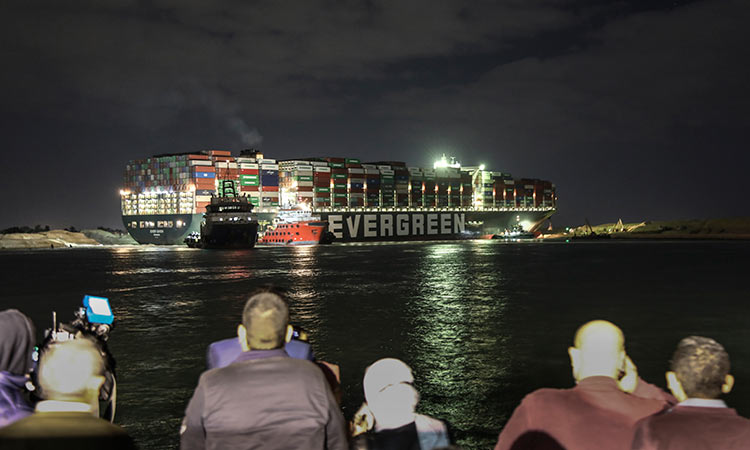 Ever Given, a Panama-flagged cargo ship, that is wedged across the Suez Canal and blocking traffic in the vital waterway is seen on Saturday. Associated Press

Some ships are too big to sail just as some corporations and financial institutions are too big to fail. Both massive ships and businesses do, of course, fail simply because they are too big. This is certainly the case of the Japanese-owned Ever Given container vessel which is slung across the width of the Suez Canal, blocking traffic in both directions and forcing ships to make the long journey around Africa to reach European and other Western destinations.

Among those taking this route is Ever Greet, the trapped vessel’s sister ship.

Waiting at both ends of the canal or stalled in the waterway are 321 ships carrying oil, chemicals and livestock, cargo worth $9.6 billion a day.

The Ever Given fits the international profile of vessels involved in global shipping. It is Panama-flagged, owned by Japan’s Shoei Kisen Kakisha, managed by Singapore-based Bernhard Schulte Ship Management, leased by Taiwan’s Evergreen Marine Corps, and crewed by 25 Indians.

While the ship is of the maximum length allowed to pass through the canal, it exceeds the average width by nine metres, and gross tonnage by 59,000. Similar ships are waiting to make the journey.

The Ever Given is clearly a monumental vessel but it is not even among the ten largest container ships plying the seas.

The crisis caused by the stranding of the Ever Given is a far cry from the August 2015 celebrations at the opening of the $8 billion lane, dubbed Suez Canal II, at the northern end of the waterway. The events featured fireworks, aerial and naval displays, and a performance of the opera Aida, composed by Italian master Giuseppe Verdi for the inauguration of the canal in 1869 by Khedive Ismail Pasha, Egypt’s great moderniser, reformer and builder.

Suez Canal II is not a new canal but a 72-kilometre parallel channel to extend the 164-kilometre long original channel which provided a 7,000-kilometre shortcut for east-west trade.

While the project was not Suez Canal II, it has been an achievement for Egypt. It was designed by Egyptians, financed by a national subscription, and executed by Egyptians without killing and maiming tens of thousands of workers which was the case 150 years ago. The extension has shortened the amount of time required to pass through the canal, saving money for shipowners, their customers, and consumers. While revenues have risen slightly, they did not more than double as touted by the government.

Nearly 19,000 ships passed through the canal last year carrying more than one billion tonnes of cargo. Egypt earned $5.61 billion in revenues from the canal in 2020, a little more than before the extension.

While the Suez Canal is one of Egypt’s most important financial assets, it is also an historical icon and the documents which led to the building of the canal were registered in 1999 by UNESCO as “History of the World” documents with the aim of preserving the canal’s exceptional value and protecting it for humankind. The Ever Given has shown it may need protecting from humankind.

Finally, in the mid-19th century Ferdinand de Lesseps established a company to build a canal after convincing Khedive Ismail to back it. Work began in 1859 and finished a decade later. However, the cost of the canal beggared Egypt and ended the career of Khedive Ismail who was overthrown by his son Tewfiq Pasha. He was amenable to the imposition of a British protectorate.

This ended when Gamal Abdel Nasser and the Free Officers ousted the last member of the Khedival dynasty King Farouk in 1952. When Nasser nationalised the canal in 1956, Egypt, France and Israel attacked Egypt in the expectation of toppling Nasser.

However, their timing was poor. The tripartite aggression took place in the twilight of British and French colonialism and overlapped with the Soviet invasion of Hungary to crush the revolt against Russian rule. US President Dwight Eisenhower ordered a halt to the war and forced Israel, which had invaded Egypt’s Sinai Peninsula, to withdraw. Nasser survived and became a hero in the Arab world and a Third World leader. The canal closed from October 1956 until March 1957. Israel’s 1967 war closed the canal once again. It remained closed through the 1973 war until 1975, prolonging the dislocation of global shipping.

The stranding of the Ever Given in the Suez Canal coincides with the banning of massive cruise ships in Venice’s lagoon. They are no longer allowed to sail past St. Mark’s Square and, for the time being, obliged to dock at the nearby industrial port of Marghera rather than the tourist port at the city centre. The measure came into force before the city fathers came up with ideas about where to establish a cruise ship dock outside the lagoon.

Before COVID-19, cruise ships had brought millions of visitors to the city but local people and critics complained that these huge vessels make the waters of the lagoon unsafe for small craft, their wash endangers historic buildings, and they pollute the ecosystem of the lagoon. These multi-storeyed vessels reach 360 metres in length, 65 metres in width, and can accommodate up to 6,000 passengers who invade Venice in waves, transforming the city into a vast tourist site and angering Venetians. Container ships are not the only problem. 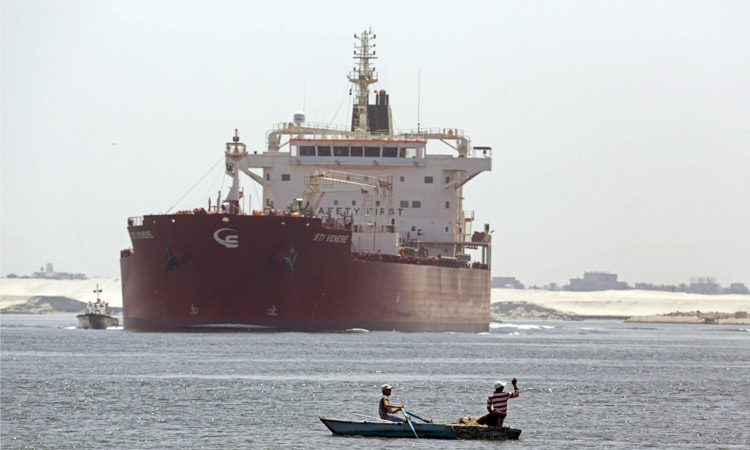 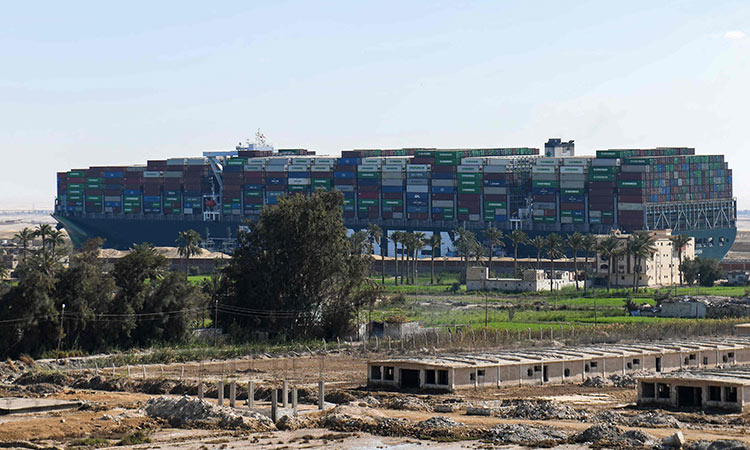 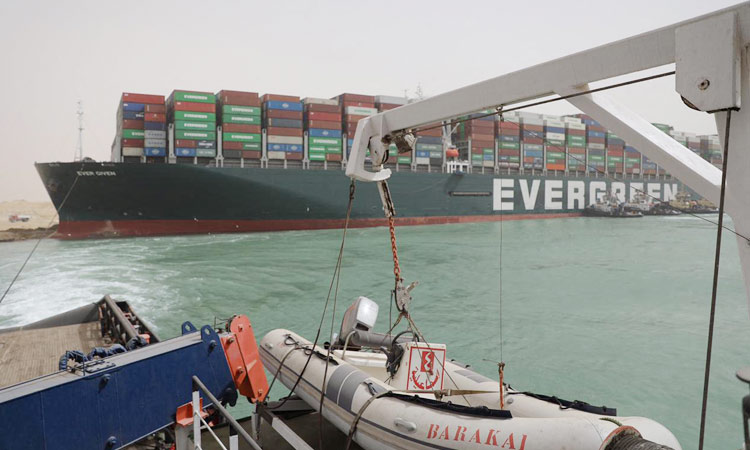 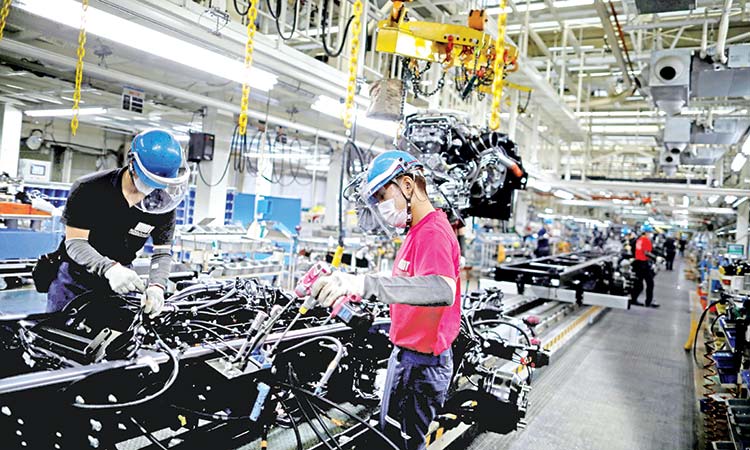