Salem is an Emirati analyst.

Salem is an Emirati analyst. 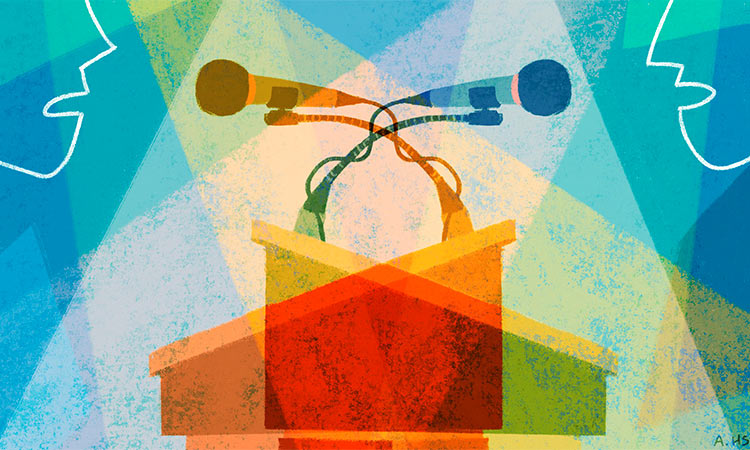 Regardless of the fact that debate as a form of arguing and structuring our lines of reasoning has been used for centuries, contemporary understanding of this concept has substantially shifted from its original essence. Modern debates are mostly negative experiences where opponents often refer to offensive, mockery and abusive exclamations against each other. Present-day implications of sarcasm and insults have detrimental effects on the nature and value of debate as an intellectual and virtue-based battle of the mind and reason.

In general, debating should be interpreted as public speeches or open discussions aimed at convincing a target audience in light of well-rationalized evidence and persuasive arguments in favour of a particular stance on the subject matter. Accordingly, the true essence of debate is being convincing, supporting all claims with evidence, and being respectful with regard to the other side of the argument.

Great thinkers and philosophers of earlier times have always managed to stay focused on following and explaining their perspective with the highest intellectual level possible along with being able to respond to the opponent’s statements with dignity and respect, carefully listening to one another. Probably, Plato’s wisdom embedded in his dialogues can be a vivid manifestation of such weighted, well-reasoned, and virtue-driven arguing with opponents of his views which seem both persuasive and worth admiration.

The current perception and practice of debating has sufficiently shifted from the above situations and characteristics. More often than not, the issue of insulting and attacking the opponent with offensive statements has been a clear integral part of modern debate. For instance, the recent presidential elections in the US showed a vivid illustration of degrading essence of the so-called ‘art of debate’ given ugly and too personalized arguing between Donald Trump and Joe Biden. Attempting to reveal their presidential ambitions to the public, both candidates insulted each other instead of demonstrating their intelligence, state wisdom, patriotism, and respect to each other’s opinions as relevant to the art of debate. It appeared somehow humiliating in terms of non-acceptance of other’s views and ideas. Hence, the up-to-date approach to debate looks as diminishing in its original intent of quality battle of the mind and reason.

In this regard, even though the current perception of the concept appears controversial and undermined by negative factors, a comprehensive insight into experiences of the person capable to engage in well-reasoned debates can be a valuable educational lesson to learn the art of debate in its original interpretation – and I can think of no better figure than Adel Al Jubeir, the Saudi Minister of State for Foreign Affairs. Exploring his interviews can be useful to comprehend the fact that quality manifestations of the art of debate are possible nowadays. His calm tone, confident voice, as well as well-reasoned claims and statements definitely are worth respect and careful study. Even when controversial or tricky questions are asked, he maintains respectful and persuasive voice to establish his line of argument. In this respect, his intelligence and large-scale education background probably play an important role. As a result, an in-depth study of Al Jubeir’s strategy of debating can be helpful as a hands-on experience to acquire this skill among diverse student groups as contrasted to negative role models of poor debate cases.

Despite that the art of debate has shown to deteriorate due to ineffective speeches full of insults and attacks on the opponents, referring to classical understanding of debate and role models such as Al Jubeir can be favourable to change both practice and perception of this public discussion.