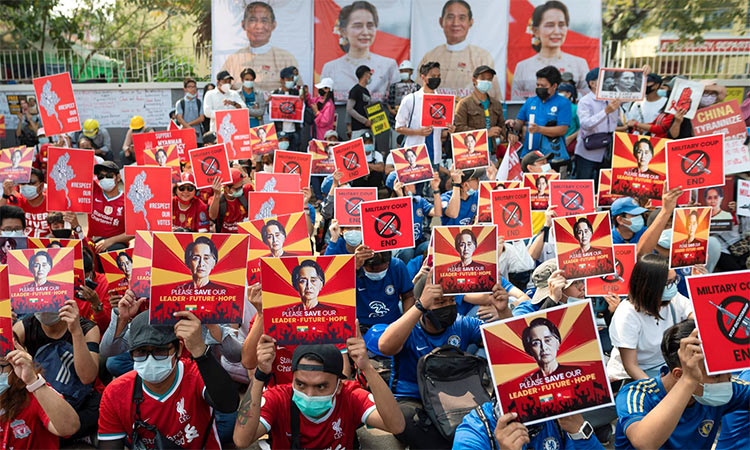 The 33-year-old woman was hard to miss as she stood in the hospital car park, dressed in a pink track suit, one hand raised in a three-fingered salute of resistance, the other clutching a placard calling for the junta to release Myanmar’s elected leader Aung San Suu Kyi.

“They think they are untouchable,” said Susu San, having traveled 1,500 km (930 miles) from the northern tip of Queensland to the workplace of one of the “junta children” at a hospital in the small city of Mackay.

“This is a way to empower our people by saying that no one can escape from lawlessness and brutality.”

Since the coup, some protesters have launched an online campaign to denounce family members and associates of the junta in Myanmar and beyond — and spotlight those living comfortably in democratic nations far from the bloody chaos at home.

Organisers say it is a non-violent way to put pressure on the junta to reverse the coup and return Myanmar to democracy.

“The military understands one language. That is pressure,” said Tun Aung Shwe, a member of the Burmese community in Australia who was among a group that has gone to Canberra to urge the government to sanction people affiliated with the junta.

“Social punishment is effective as it shakes up the junta, getting them to rethink what they are doing.”

Repeated calls to the military and government seeking comment were unanswered. Aside from shaming friends, associates and kin of the junta on social media, activists have also created a website, called socialpunishment.com, information from which has been widely shared on Facebook.

The website features more than 120 profiles of people who are accused of failing to speak out against a coup that has halted 10 years of democratic reform and brought bloody suppression.

It ranks them on a “traitor” scale from elite to low, and there are photographs of the profiled person, details of their associations, and whereabouts on the globe, making it easy for Burmese in those countries to track them down.

As of 2016, there were nearly 33,000 people from Myanmar living in Australia alone. Susu San said her target at the Mackay Base Hospital was 28-year-old doctor Min Ye Myat Phone Khine.

According to the website, his mother is the junta’s attorney general, Thida Oo, whose office is now crafting legal cases against Suu Kyi. She had served as a permanent secretary in the attorney general’s office during the civilian government, and her acceptance of a role in the junta was seen as a deep betrayal by Suu Kyi’s supporters.

Neither have responded to requests from Reuters for comment, but two days after Susu San’s protest Min Ye Myat Phone Khine posted messages for the first time on his Facebook page since the coup, declaring support for the pro-democracy movement.

“I have come out of the shadow of my parents to walk my own path,” he wrote on March 8, “I will stand boldly with the people because I am only one citizen seeking to achieve a true and fair democracy.”

Ethical doubts: Still, the campaign against the children of the junta has raised questions among some participants over the ethics of shaming people online because of the actions of their parents. Anger over mass arrests and killings during anti-coup protests outweighed those qualms, campaigners said. An activist group, the Assistance Association for Political Prisoners, said security forces have killed more than 224 people so far. Reuters could not independently confirm this number.

Susu San grappled with the ethical complexities of targeting “junta children”, as she calls them, but ultimately decided in her mind that it was ‘fair’, given the number of Burmese being gunned down in the street.

Min Ye Myat Phone Khine’s earlier failure to speak out against the coup on his social media accounts persuaded Susu San that he was fair game.

In Australia, some in the Myanmar community are campaigning for the government to sanction children of members of the junta by freezing their assets or revoking their visas.

Some people targeted in Australia have had their personal information, phone numbers, places of work, and suburbs where they live, published online. The campaign to shame the junta is an extension of wider campaign to boycott military run companies, and isolate individuals who back the coup. Amara Thiha, a Myanmar fellow at the US-based Stimson Center think-tank, warned that there were signs that going after individuals online could prove counterproductive. He noted a hardening of the language and threats used by soldiers and their supporters on social media as they came under greater pressure.

Bryan Tun, the son of Myanmar’s commerce minister, Pwint San, is also working as a doctor in Australia. Though not listed on the website, Tun said he has been abused on social media even though he is a longtime supporter of Suu Kyi’s party, posts messages of support for the protest movement and disagrees with his father politically.

“I have been socially punishing him since this thing happened. I have been openly protesting against him,” said Tun, 28, a doctor at Redland Hospital in Queensland. Reuters could not reach Pwint San for comment.

Despite his experience, Tun said he still believed the online campaign was a valid act of resistance. “I think that is one of the very few weapons that people have,” he told Reuters. “They [the military] are killing people on the streets with guns.”

But some targets of the online campaign feel victimised. One of the first to be attacked online was Nan Lin Lae Oo, a student the social punishment campaign identified as the daughter of Lt. Gen. Kyaw Swar Lin.

Some parents have made impassioned pleas on social media, like the wife of a retired senior military officer, Htin Zaw Win, whose daughter was identified, by the “Civil Disobedience Movement Naming & Shaming” on its Facebook page, as a student at Yangon’s University of Medicine 1.

“You can do any kind of social punishment to me, the mother,” Khin Khin Aye Cho wrote on Facebook. “If it will satisfy you to beat both parents to death, then I will accept anytime and I will sacrifice my blood for my daughter.