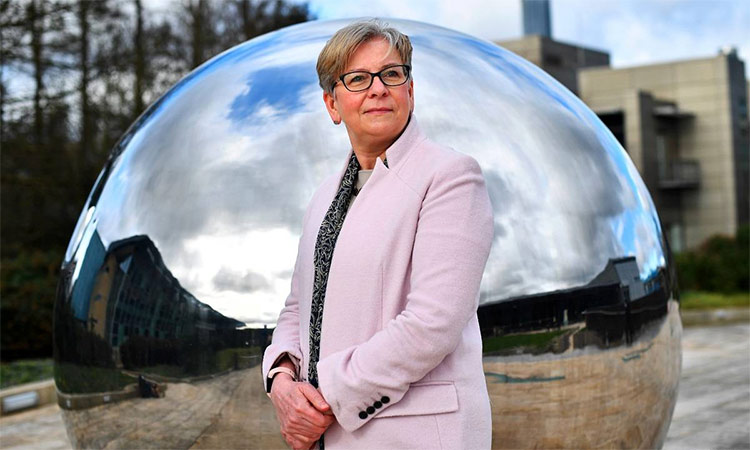 Sharon Peacock, one of the world’s top scientific warriors in the battle with the 0.0001-millimetre virus that causes COVID-19, had to fight a much more personal battle inside Britain’s education system to rise to the top.

Peacock, 61, is a globally recognised virus hunter: COVID-19 Genomics UK (COG-UK), which she set up a year ago as the pandemic swept towards Britain, has sequenced nearly half of all the novel coronavirus genomes so far mapped around the world. Her life story is a song to meritocracy and an illustration of how the quiet kindness of strangers can change the fate of a young life. But it is also a tale of how the British educational system almost overlooked the talents of a young woman who would become a distinguished Cambridge professor of microbiology and put her country at the leading edge of sequencing a virus that has sown personal and economic devastation across the planet.

Brought up in a working class family in the southern English county of Sussex, Peacock failed a crucial exam still used in parts of the country to pick out the smartest children at 11 years old.

“I didn’t come from a scientific background. My parents were working class and we didn’t know anybody who had gone to university. A key defining moment in my life was when I failed the ‘11+’,” Peacock told Reuters.

It meant she went to a second-tier secondary school, where the Focus was on practical skills like cooking, typing and needlework, rather than a more academic grammar school.

Though fascinated by biology, she was barred from taking “O-levels” — exams usually taken at 16 — in biology, chemistry and physics or modern languages. Peacock left school at 16 to work in a grocery store, without going on to study for the “A-levels” that are the usual route to university for English school leavers.

When she was 17, she began work as a dental nurse. “I really wanted to do nursing. This is where my scientific interest really started to expand. So I moved from teeth to patients,” Peacock said.

Without the right scientific qualifications, Peacock had trouble getting into nurse training but managed to talk her way in and qualified as a nurse Focused on end-of-life care.

Peacock was on a male medical ward watching a junior doctor examining a patient when she discovered her future. “I thought: ‘this is absolutely incredible — I really want to do that’,” she said. “But I was terrified to tell anyone that I wanted to do it as they would have probably found it quite comical. It was a Eureka moment for me.”

After twice failing to get into medical school she rang up Southampton University to tell them how much she wanted to study medicine and met the admissions tutor, David Wilton.

“We were looking for something special, what I would describe as a bit of ‘sparkle’,” Wilton, now emeritus professor of biochemistry at Southampton, told Reuters. Peacock was offered a place. She credits Wilton with changing her life and said the turning point showed just how important minor acts of kindness could be.

“I haven’t looked back since. I have absolutely loved being a medical student, a doctor and now a microbiologist,” she said. “It was a defining moment for me - a moment of kindness from somebody can make a huge difference to someone’s life.”

Fast forward 40 years and after stints in London, Thailand and Oxford, Peacock is a professor at Cambridge. Prime Minister Boris Johnson’s former chief adviser, Dominic Cummings, told parliament that one of the fields in which Britain could be considered a scientific world leader was in the hunt for new coronavirus variants - Peacock’s work.

Peacock says the British education system has improved since her time, though she felt children could be introduced earlier to the wonders of science.