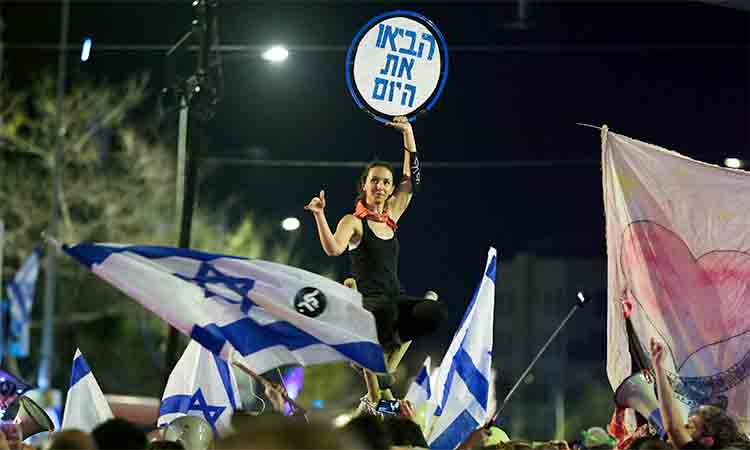 Protesters hold Israeli flags during an anti-government demonstration near the Israeli prime minister’s residence in Jerusalem on Saturday ahead of the election on Tuesday. Agence France-Presse

Tomorrow’s election in Israel will be a “cliffhanger.” Polls reveal it is too close to call. Every vote will count as every Knesset seat will count in the formation of what will be a narrow coalition. None of the polls predicted which bloc — Netanyahu or anti-Netanyahu — will be in a position to form a government. This explains why Prime Minister Binyamin Netanyahu, the opportunist who has always despised and deprived the 1.8 million Palestinian citizens of Israel, has suddenly become their best friend.

He has planted billboards in Arab towns and villages calling himself “Abu Yair.” He hopes to pick up a seat or two from Palestinian citizens of Israel, which could boost the Likud’s chances of winning.

Netanyahu has also been desperately courting Mansour Abbas, head of Ra’am (United Arab List), which defected from the Joint Arab List which has represented Palestinian citizens since 2015. A dentist from the Druze majority town of Maghar in central Israel, Abbas argues that he has split from Joint Arab List, which won an unprecedented 15 seats in the 2020 election, and gravitated toward Zionist Israeli parties in order to secure funds and reforms beneficial for Palestinian citizens. Netanyahu has promoted the belief that if he returns as prime minister, he would make good on promises to provide money for crime-ridden, deprived and neglected towns and villages although he has branded Israel’s Arab citizens “the enemy” and contributed mightily to their marginalisation.

Israeli media have suggested Abbas could be the “king maker” as Knesset members in his party could decide whether the Likud or the opposition bloc will form the next government. Perhaps Abbas likes the idea of being “king maker.” However, it is not clear why Abbas believes Netanyahu will honour electoral promises to Palestinians after 73 years of Israeli abuse, ethnic persecution and expropriation of those who remained after the establishment of the state.

To maintain support for his faction, Abbas may have to think again when cabinet-making begins as Netanyahu has made a sharply criticised vote-sharing deal with the far-right Otzma Yehudit (Jewish Power) faction. This is a racist grouping comprising followers of Meir Kahane, founder of the banned-in-Israel Kach party who was assassinated in New York in 1990 by an Egyptian-born US citizen. Twenty-seven years ago, during dawn prayer at the Ibrahimi mosque in Al Khalil (Hebron), Palestinians at prayer were attacked by Israeli-US settler Baruch Goldstein, who slew 29 and wounded dozens of others. The massacre has not been forgotten by Palestinians.

Israeli security forces broke up a demonstration on its anniversary on February 25th.

Netanyahu has even visited Bedouin in the Negev who are the most persecuted of Israel’s Arab communities. They number 200,000-210,000. The landless half live in seven Israeli-built towns without basic amenities and suffer from unemployment, crime and drugs; the landed half continues to dwell in scrappy villages where they are under constant pressure to move to the towns and their homes are repeatedly bulldozed. Taking coffee with Bedouin shaikhs is a measure of Netanyahu’s desperation.

Netanyahu has realised he may need the support of Ra’am which may win four seats in the Knesset. The latest polls give Netanyahu’s Likud 30-32 seats while he requires 61, out of 120, to retain the top job and, perhaps, avoid being dismissed and sent to jail for corruption and breach of trust when his trial resumes next month. Winning the election could slow the process and give him time to make the charges go away. If he loses he could become the second Israeli prime minister forced to step down and serve prison time; the first was Ehud Olmert also from the Likud.

This is the fourth Israeli election in two years. The last took place on March 2nd, 2020.

It resulted in political deadlock with neither of the two leading parties gaining enough seats to rule or form a coalition. To avoid another early election, Netanyahu formed a coalition with the Blue and White bloc headed by Benny Gantz, who had vowed never to join with him in government.

Blue and White promptly fractured, leaving him with a rump party while Netanyahu became prime minister for 18 months and promised Gantz he would take over for the final 18 months of the Knesset’s term.

As expected, Netanyahu reneged and the government was dissolved over its failure to pass the budget for this year. The mainly Palestinian Arab Joint List had been the third largest bloc but it is predicted it could win only eight seats in this poll. Abbas’ defection with his likely four seats has cost Palestinian citizens of Israel dearly while Gantz’s collusion with Netanyahu has reduced Blue and White to a predicted four seats.

Obviously, Israeli political fortunes and alliances change rapidly. The main issue for recent elections has been Netanyahu rather than policies or ideologies. He first became prime minister in 1996 but was defeated by Labour’s Ehud Barak in 1999. Netanyahu returned to the premiership a decade later and has stuck to the job without regard for policy or principle, becoming Israel’s longest serving prime minister.

The second largest party this time round could be Yesh Atid, the main component of the anti-Netanyahu opposition. Yesh Atid passes as a “centrist faction” on Israel’s right-dominated political spectrum. Founded by Yair Lapid in 2012, it came second in the 2013 election while aligned with Netanyahu but lost badly in 2015 when it ran against him. It was part of the Blue and White bloc in 2020 until Gantz joined forces with Netanyahu and leftists and centrists deserted.

Israeli politics have long been broken due to the nature of the state and the affiliations of its Jewish citizens who range from the communist left to the extremist right. Unfortunately, leftists are a dying or disappearing breed, leaving the field to the right where there are a multiplicity of nationalist, colonialist, and religious parties. Parties which passed for the centre have shifted right-wards.

While there are many causes of the shift, demographics played a major part. There was an influx of Jews from the former Soviet Union during the 1970s and after its collapse in the 1990s.

This created a 1.2-million strong community of Russian-speaking Israelis out of a total of 6.8 million Jews. Former Eastern block Jews were and are virulently anti-socialist and support rightist parties. Following the example of earlier migrants from Yemen and Morocco as well as religious Jews and settlers from the West, they have changed the balance of power in Israel and given Netanyahu term after term as prime minister. 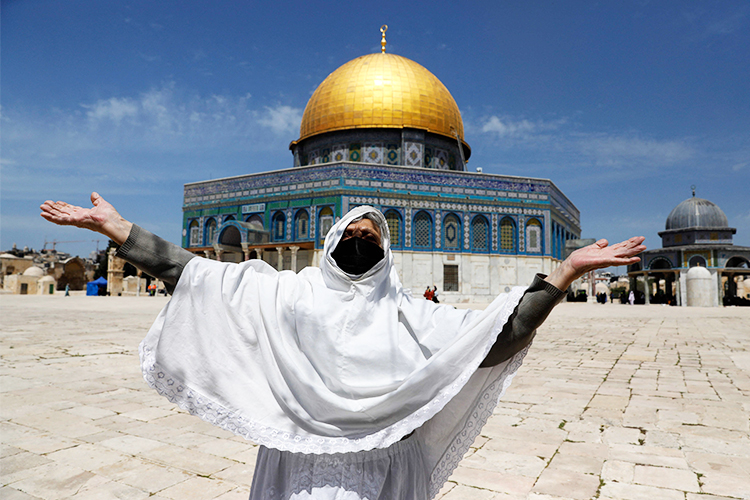 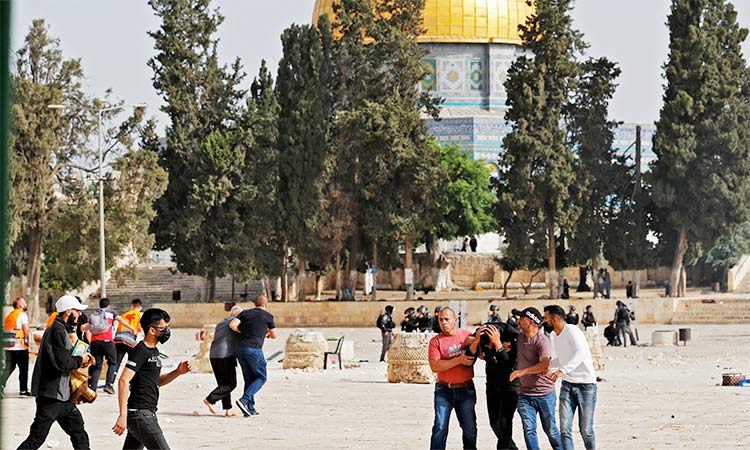 ‘Change’ will not change Palestine-Israel situation

The Israeli Knesset, which emerged after the March election this year, is a fractured body with 13 parties, a number often considered unlucky. This time, perhaps, 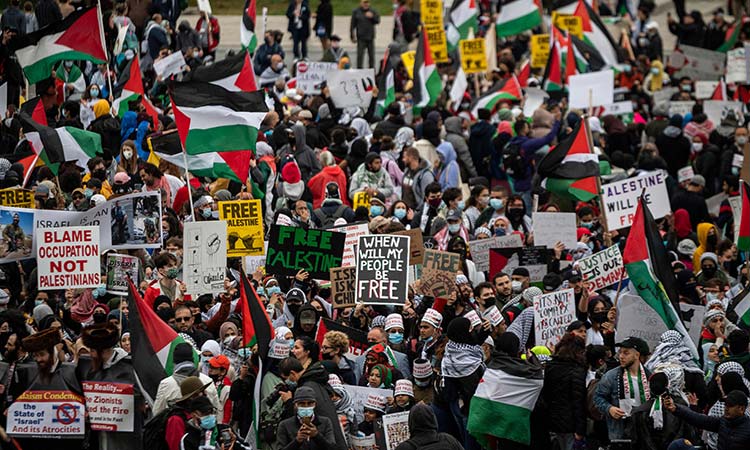