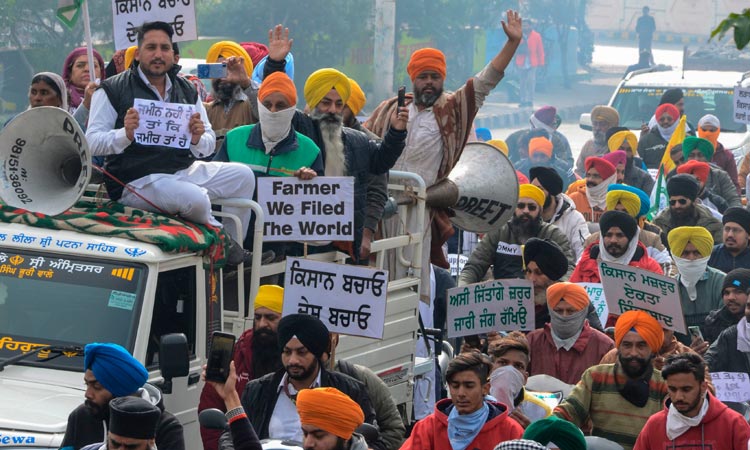 Thousands of farmers from the Punjab protest against new farm laws.

Although the World Bank reports more than 65 per cent of India’s population is rural, Modi has angered India’s farmers by forcing new laws through parliament that would compel them to market their produce directly through buyers. While this appears to eliminate middle-men and benefit farmers, buyers are likely to be large corporations which can set prices and produce supplies.

Under the old system, farmers sold output at government-operated markets where minimum prices for key crops were guaranteed. There were restrictions on buyers and on prices of essential commodities. This arrangement provided farmers security and enabled them to decide what and when to plant.

Tens of thousands of farmers from the Punjab, many of whom belong to the 20 million minority Sikh community, began their protest last fall. They are backed by farmers, transport workers, and other trade unionists from around the country so the protest is not confined to Punjabi Sikhs.

Determined to stay until the law is repealed, the farmers arrived on trains, tractors, and trucks and set up camps on the edge of New Delhi. They have braved police tear gas and water cannon as well as heat, dust, cold and rain.

On Republic Day, Jan.26, they mounted a major challenge to the government by invading the capital as it marked the anniversary of India’s adoption of its constitution. This commemorates its transition to full independence as a republic rather than a post-Raj dominion with the British monarch as head of state and a British governor general.

Republic Day rather than Independence Day, on Aug.15, is celebrated with a splendid military parade and entertainments by cultural troops from around the country. Therefore, the farmers’ demonstration which culminated in the seizure of Old Delhi’s 17th century Mogul Red Fort, a symbol of Indian freedom, was particularly provocative.

In January, the Supreme Court put the laws on hold. Subsequently, Modi’s government has offered to suspend them for 18 months but the farmers want them to be repealed.

The farmers’ protest has attracted international support from high profile Swedish climate change activist Greta Thunberg. She sent a document to Indian campaigner Dish Ravi who edited and distributed it to the farmers and their supporters. She was arrested in Karnataka state in the south and imprisoned on conspiracy charges for condemning violence against protesters, calling for popular support for their cause, and urging the government to listen to them.

US lawyer Meena Harris, niece of US Vice President Kamala Harris, a number of US legislators, Barbadian signer Rihanna, and Indian celebrities have leant their backing to the farmers’ cause.

Model and Bollywood actress Sonia Mann has gone a step further by spending time in a camp and speaking out. She is the daughter of leftist activist Baldev Singh Mann who during the 1970s and 1980s organised Punjabi youth and farmers against both separatist Sikh extremism and police violence. He was assassinated while travelling to his village to welcome his daughter a week after her birth. Anticipating his death, he wrote her a moving a moving letter urging her to “be at the head of the caravan engaged in the battle for truth. It is far from my dream that you should grow up to be a Sikh, Hindu or Muslim. You must try to rise above these identities and be a human being.  Beware, lest the humanity in you is diminished because of such divisions.”

He spoke for the “Old India,” the post-independence India of Mahatma Gandhi and Jawaharlal Nehru who founded modern India on the basis of secularism and equality for all its citizens, whatever their faith.

Indians from the diaspora have also become involved. New Jersey-born Swaiman Singh, a heart physician, left his family and a fellowship at a prestigious hospital to travel to New Delhi and join the farmers’ protest. The son and grandson of Punjabi farmers, he intended to establish a clinic and pay local doctors through a non-profit medical organisation he founded.

He had originally planned to stay a week or two, but decided to remain when he found he had to treat multiple cases of heart attacks, diarrhoea, and depression. He set up a makeshift clinic in an abandoned, unfinished bus terminal near a protest camp where he deals with farmers’ ailments, and has provided shelter for elderly men during north India’s cold nights. Around a hundred volunteers come to help on a daily basis as the farmers’ needs are great. There have been several dozen deaths and half a dozen suicides since they began their protest.

Modi is not only riding roughshod over farmers, laws favouring the Hindu majority adopted during his time in office also discriminate against India’s 200 million Muslims who have faced bigotry for decades. The most egregious measure is a law providing a route to citizenship for refugees of every faith but Islam who are facing persecution in Pakistan, Bangladesh, Afghanistan and Myanmar. To make matters worse, Muslims everywhere in India must produce documents to prove uninterrupted residence for 50 years in order to remain. Documental proof for many of the urban and rural poor of all faiths simply does not exist.  Detention camps are being established in some Indian states to incarcerate Muslims who are no longer classified as citizens or residents.

Modi’s law is unconstitutional. The country’s constitution regards as an Indian citizen a person who is domiciled in India, is born in India, has an Indian parent, or has resided in India for five years. The constitution also guarantees “equality before the law” and bans discrimination on the basis of faith, race, caste, sex or place of birth.

Modi’s Bharatiya Janata Party (BJP), which won re-election in 2019, is a right-wing Hindu party allied to the Rashtriya Swayamsevak Sangh (RSS), a Hindu supremacist social and paramilitary organisation founded in 1925. Modi was once an employee of the RSS which takes the view that Muslims, Christians and other non-Hindus are foreign elements planted in India. In January

1948, Mahatma Gandhi was assassinated by RSS member Nathuram Godse. The movement has been re-repeatedly involved in communal riots. In January this year, a large gathering of men wearing saffron hats and scarves, the colour of Hindu supremacy, inaugurated the Godse memorial library and knowledge centre, the aim of which is to rehabilitate and venerate Godse. This was the latest manifestation of Hindu supremacists which is intended to erode India’s secular democratic vocation set by the country’s founding fathers.