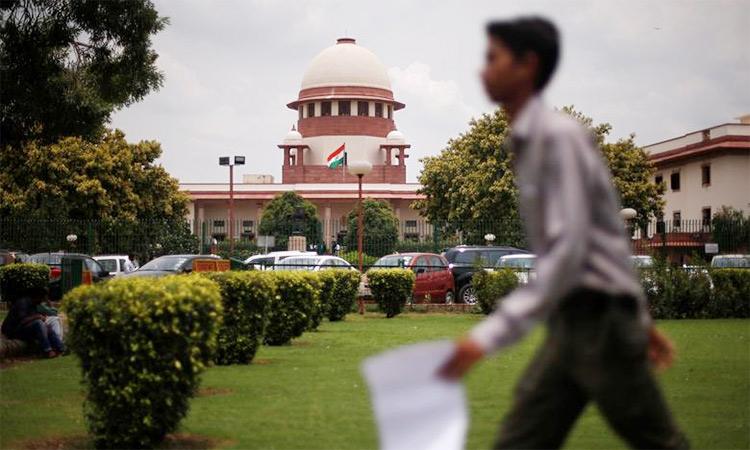 A man walks past the building of the Indian Supreme Court in New Delhi. File/Reuters

Affirmative action, known in local parlance as reservation, is one of the most sensitive issues of modern India. Its roots lie in the caste system, which apologists present as a form of division of labour.

The caste system went way beyond division of labour. It barred social mobility. Education and jobs became the monopoly of a small minority. The vast majority was tied down in particular vocations.

Recent genetic studies indicate that the rigid caste system evolved about 2100 years ago. This fits in with historical data about the end of Buddhist rule and the rise of Brahmin power.

The colonial rulers depended on the so-called upper castes to run the administration as they were the only job-seekers. They made no effort to dismantle the caste system.

Early in the last century, at the insistent demand of non-Brahmin leaders, the Madras provincial administration introduced reservation of jobs for communities with poor representation in the services. Special provisions were made for them in higher education too.

No other British Indian province followed this example. However, a few princely states made similar provisions for members of backward castes.

The Constitution, which came into force in 1950, proclaimed equality and promised equal opportunity to all. It prohibited discrimination on the basis of caste and religion. However, it made special provisions only for Dalits and Adivasis, whom it refers to as Scheduled Castes and Scheduled Tribes.

Within months a Brahmin questioned the validity of the reservation system in the Madras High Court. That court as well as the Supreme Court held that it was unconstitutional.

Parliament then added a proviso to the equality clause, giving the state power to make special provisions for advancement of socially and educationally backward classes of people. Successive governments used the proviso only to protect pre-existing reservation.

In the 1950s, C. Rajagopalachari, Congress Chief Minister of Madras, drew up a scheme to tie children down in their parents’ occupation. Also in the 1950s, Kerala’s Communist Chief Minister, EMS Namboodiripad, planned to meddle with reservation in the guise of promoting merit. Public outcries forced both of them to abandon the plans.

These instances illustrate how leaders and officials belonging to the so-called upper castes chipped away at affirmative action from within.

When Prime Minister VP Singh decided to extend reservation to all backward classes throughout the country, in terms of the recommendations of the Mandal Commission, the Bharatiya Janata Party’s student affiliate launched a violent protest movement. It failed to stop the reform.

This week the Supreme Court goes into the reservation issue once again and has said it will take the opportunity to review the1992 decisions. It is re-visiting the issue in the context of two enactments of 2018, one by Maharashtra state and the other by the Centre.

The Maharashtra law extended reservation to the Maratha community. The Bombay High Court upheld the law but reduced the quota fixed by the state government.

The Central enactment, while granting constitutional status to the National Commission for Backward Classes, took away the states’ right to fix quotas.

The chief weakness of the judiciary’s approach to the reservation is its exclusive focus on equality to the exclusion of equal opportunity. There can be no genuine equality among unequal groups.