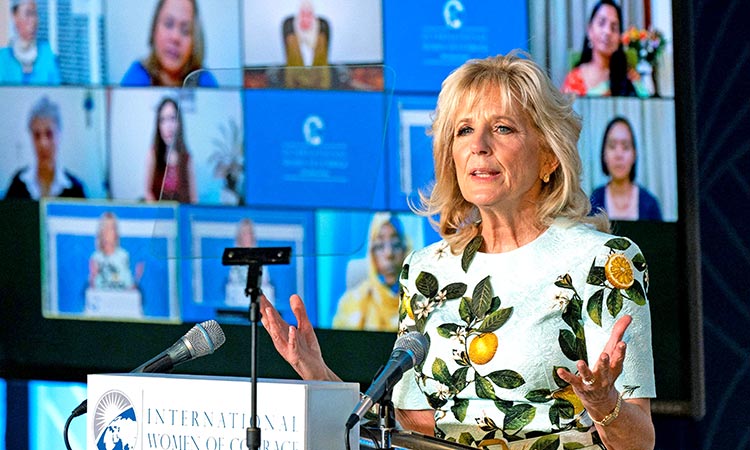 US First Lady Jill Biden speaks at the 2021 International Women of Courage Award virtual ceremony at the State Department in Washington on Monday. Agence France-Presse

Jill Biden sees a teachable moment in the depths of the coronavirus pandemic.

The first lady sat in a socially distanced circle in the library at Fort LeBoeuf Middle School in Pennsylvania, listening and taking notes as parents expressed relief that the school had reopened and their kids were back in the classroom.

One mother talked about the “bumpy patches” of online learning and said reopening “has been so to the T” that she doesn’t worry about her son and daughter. Another mom said the district included parent input and she was comfortable her children were in a “safe environment.”

A teacher herself, Biden praised the small circle of parents, teachers and administrators for working together to help reopen Fort LeBoeuf. And she repeated a message she had delivered earlier that day while visiting Benjamin Franklin Elementary School in Meriden, Connecticut.

“We’ve been through really tough, hard times, but I think the one good thing about educators that I love — and that includes the cafeteria workers, the bus drivers, the teachers, everyone involved — is we’ve all learned from this,” Biden said of the pandemic and its emotional, social and human toll.

“We’re all going to take everything that we’ve learned and are going to turn it into opportunity to make things better for students as we move forward,” she said.

The first lady seems intent on turning every aspect of her new job into an opportunity, for that matter, especially anything related to her triple passions for education, fighting cancer and supporting military families.

A few days after she became first lady, Biden told governors’ spouses during a virtual meeting at the White House that her new platform is “one that I would never let go to waste.”

She’s long been focused on education, having taught at a high school, a psychiatric hospital and community colleges for more than three decades. She’s still teaching, virtually from the White House, and pining for the day she can go back to the classroom.

Finding a cure for cancer also motivates her and President Joe Biden. The couple lost son Beau to brain cancer in 2015 at age 46. Her parents died of cancer, and one of her sisters had a stem cell transplant. Doctors also gave the dreaded breast cancer diagnosis to four of her girlfriends within a one-year period in the 1990s.

The Bidens also advocate for service members and their families, an appreciation that stems from Beau Biden’s service in the Delaware Army National Guard, including a deployment to Iraq. Jill Biden intends to revive a military family support program that she led with former first lady Michelle Obama when Biden’s husband was President Barack Obama’s vice president.

Jill Biden quickly set her agenda as first lady by highlighting all three of her longtime causes in her first weeks.

She has been busy with virtual meetings, teaching her community college English class, official travel, running errands in the Washington area and settling the family’s dogs into the White House. Even the light blue scrunchie she wore in her hair has gone viral.

Biden, known for springing surprises and practical jokes, also is intent on injecting some levity into things as her husband faces daunting crises: She woke him up to show him giant hearts she had displayed on the White House front lawn for Valentine’s Day.

“She’s off to a fast start, and I think a very solid one,” said Myra Gutin, author of “The President’s Partner: The First Lady in the Twentieth Century.”

The first lady is also keeping a robust travel schedule despite the pandemic. Her first official outing was to a nonprofit community health center in Washington to highlight services for cancer patients. From there, she made a detour to personally deliver chocolate chip cookies to National Guard troops stationed at the US Capitol.

She recently travelled to Virginia Commonwealth University in Richmond to tour its Massey Cancer Center, where researchers study the socioeconomic and cultural factors that contribute to disparities in cancer outcomes.

Biden also met virtually with the leaders of teachers’ unions, the spouses of defense officials and governors, military kids and their teachers, and government cancer researchers, among others. She sent prerecorded remarks to several conferences, and taped a public service commercial with Champ and Major, the family German shepherds, urging people to wear face masks.

There apparently are no incognito errand runs for Jill Biden. Unlike some recent first ladies who tried to hide their identities on unofficial outings in the Washington area, as Michelle Obama once did on a shopping run to Target, Jill Biden goes out as herself.

Stephen Bota said he knew a VIP visit was in the offing when plainclothes US Secret Service agents showed up unannounced at his DuPont Circle newsstand in late January, but they left him to guess about who it would be. Hours later, Jill Biden walked through the door.

“I was kind of, ’Oh my God, it’s the first lady,” Bota, an immigrant from Kenya who owns The Newsroom, recalled in an interview. He and his employees - just his wife and sister-in-law - are featured in a photo with the first lady now on display in the store.

“I told her that we are so grateful that she came to see us,” Bota said.

Biden also bought coffee at Brewer’s Cafe in Richmond and confections at The Sweet Lobby on Capitol Hill, both of them Black-owned. The president, for his part, stopped his motorcade after church one Sunday for son Hunter Biden to pick up a bagel order.

“She seems more inviting,” Vigil said, noting that everyone can relate to running errands.

With the purchases, the Bidens appear to be encouraging support for small businesses, which generate most of the jobs in the US but are struggling to survive the pandemic. They also seem to be signaling that they will participate in city life.

Former President Donald Trump went only to his hotel near the White House or his golf club in northern Virginia. For dinner in a city with a robust restaurant scene, he opted to dine exclusively at the hotel restaurant. His wife, Melania Trump, kept any outings in the Washington area in an unofficial capacity under the radar.

After Jill Biden released a photo of herself at the counter of The Sweet Lobby, the boutique bakery wasn’t the only thing that became an instant hit.

The powder blue scrunchie holding up the first lady’s hair went viral. Biden said she had no idea until daughter Ashley called to tell her.

“I said, ‘What scrunchie?’ I didn’t know what she was talking about,” the first lady told talk-show host Kelly Clarkson during an interview at the White House. “I still don’t understand it.”