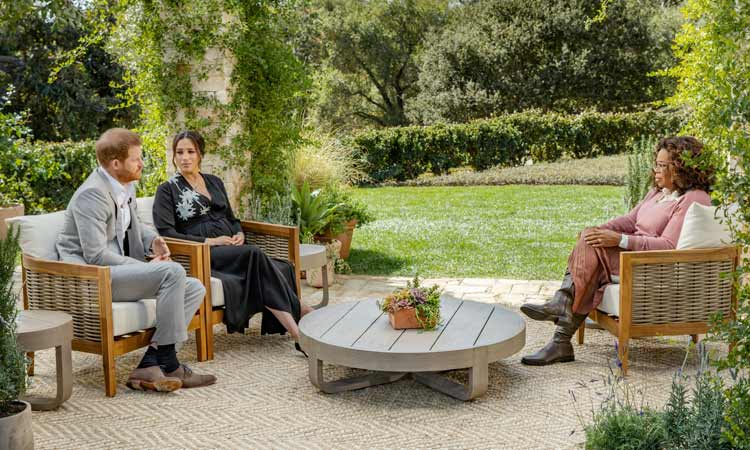 In a two-hour interview with Oprah Winfrey, which was broadcast across the globe, Prince Harry and Meghan talked about how the royal family failed to alleviate the distress they faced.

Prince Harry, Duke of Sussex, and Meghan Markle, his duchess, made their case against Britain’s royals during last Sunday’s two-hour interview with Oprah Winfrey broadcast across the globe. Meghan revealed that she had had suicidal thoughts since the royal family failed to support her while she faced a “daily onslaught of vitriol and condemnation” from the British tabloid press. When she said she needed to go elsewhere to escape, she was told she could not. She was trapped, lonely and silenced.

Biracial Meghan was particularly sensitive to racism, which has dogged her throughout her life, and was even exhibited by an unnamed person in the royal household who, during her pregnancy, speculated on colour of her first child and warned he or she would not have a title or receive protection.

Harry told his family that he and Meghan could not endure the situation but when nothing was done to alleviate their distress, the couple decided to stop working as senior royals and leave for North America where they settled in a mansion in Montecito, California, near Winfrey.

The family cut them off financially and cancelled their heir security details, forcing them to find and rely on independent means of support. While Harry has a substantial legacy from his mother, this cannot pay their bills forever.

In an earlier interview with CNN’s James Corden while the two were riding socially distanced on the open top deck of a double-decker bus, the prince said that the British press “was destroying my mental health.” He called the situation “toxic” and said, “So I did what any husband and what any father would do.”

When the couple quit as working members of the royal family in January 2020, they did not really know what to expect. The family cut them loose although Harry told Corden he was “stepping back rather than stepping down.” Harry said he and Meghan would continue “public service” as that had been their vocation. He revealed that he and Meghan remain in contact with the Queen, his grandmother, although Prince Charles, his father, has let him down.

While Harry has tried to defuse the situation, the media in Britain, the US and elsewhere has taken sides, stoking tensions. This is why, the couple decided to speak at length to Oprah.

Harry sees the media as an inveterate enemy which destroyed his troubled, tragic mother,

Princess Diana. Born in 1961 into the British nobility, Diana Spencer had been shocked by her parents’ divorce when she was 6 and suffered from depression, low self-esteem, bulimia, and self-harm. Diana had the right breeding but the wrong psychological make-up to take on the job of consort.

Nevertheless, she was chosen as a suitable wife for Prince Charles, heir to the throne, married him in 1981, and gave birth to William in 1982 and to Harry in 1984. Instead of following royal traditions, she sought to give her sons “normal lives” as much as possible, given limitations set by the palace and the deterioration of the relationship between their parents.

After five years of marriage, it was clear that Diana and Charles were incompatible. Both embarked on extramarital affairs. Charles was discreet, rebellious Diana was not. Her sad relationships were minutely covered by the press. After a tumultuous separation, the couple divorced in 1996, when William was 14 and Harry 12.

Despite her sorry history, she was adored as the “people’s princess” due to her charitable work and campaigning for recognition for AIDS patients and against land mines. She died in Paris in August 1997, at the age of 36, while in a car pursued through a traffic tunnel by photojournalists.

Since he had taken after his unruly mother, Harry was deeply traumatised by her life and death and embarked on a career of public relations mischief. This, apparently, ended when he met Meghan in July 2016. While they had very different origins and upbringings, they shared — and share — a deep sense of being wronged by their widely different circumstances and resentment against media which will not leave them in peace.

They managed to escape media radar for only a few months before their relationship was discovered and Harry began to fear for Meghan’s safety. Harry flouted royal tradition by declaring independence. He chose a biracial US divorcee rather than an unmarried British woman of noble lineage and similar background. They married in May 2018.

Meghan’s lineage is mixed and she counts as a commoner. During a 2016 interview with Elle magazine, she stated, “My dad is Caucasian and my mom is African American. I’m half black and half white.” This makes her neither but since she is defined as biracial, she has adopted and built on this classification. While former US President Barack Obama whose mother was white and father African from Kenya, he has identified as African-American as his skin colour is dark.

Her parents met in the late 1970s, married and had Meghan who is light skinned unlike her mother. People who saw them in shops or on the street mistook her mother for a nanny. Her parents also divorced when she was 6 and she eventually became estranged from her father, an award-winning lighting technician in the film industry.

Meghan met racism when she was in the company of her mother and in the wider US community. Ethnicity became an issue when Meghan applied for jobs as an actress. Although she was able to assume a range of roles — white, Latino, and black — she fell in between and was not hired. She was finally selected to play paralegal Rachel Zane in “Suits,” a television series about a New York law firm. During the second season the producers revealed her racial background by introducing an African-American man as her father. She was perfect for the part and continued through the seventh season until she became engaged to Prince Harry.

Although she may have hoped living the life of a fairy-tale princess would protect her from the slings and arrows of outrageous racism, the reality of life as a British royal soon revealed this was a pipe dream.