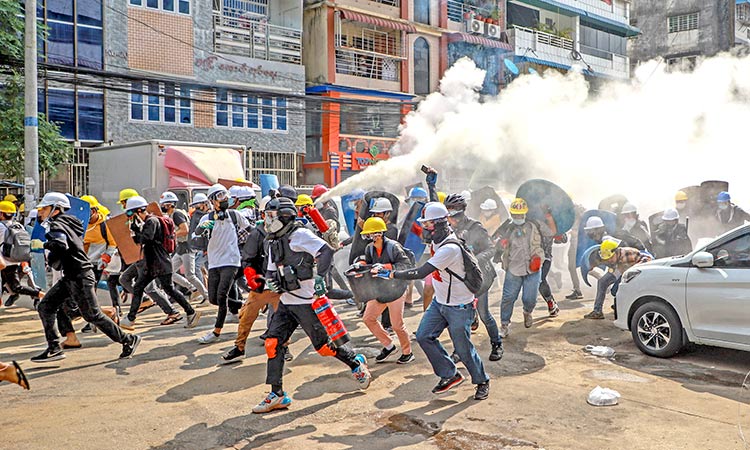 Anti-coup protesters run as one of them discharges a fire extinguisher to counter the impact of tear gas fired by riot policemen in Yangon, Myanmar on Wednesday. Associated Press

Nearly a decade ago, the United States was touting Myanmar as an American success story. The Obama administration reveled in the restoration of civilian rule in the longtime US pariah as a top foreign policy achievement and a potential model for engaging with other adversaries, such as Iran and Cuba.

But today, Myanmar is once again an international outcast, facing a new wave of US sanctions. A coup has returned the military to power and pro-democracy activists, reform advocates and journalists have been attacked and detained in a brutal crackdown.

The collapse is not America’s fault, to be sure, but it follows inconsistent efforts to nudge the Southeast Asian nation further toward democracy, enthusiasm for which was diminished by a systematic campaign of repression against Muslim minorities in the country’s north.

After years of robust diplomacy with Myanmar under President Barack Obama focused mainly on then-opposition leader and now jailed State Councilor Aung San Suu Kyi, the Trump administration adopted a largely hands-off policy. It focused primarily on Myanmar’s strategic importance in the competition between the United States and China for influence in the region.

Myanmar has become a reminder that, for all the hopefulness and anticipation of Obama administration officials — many of whom now serve in the Biden administration — there are limits to America’s ability to shape developments in another nation, particularly one so reclusive and far away.

The restoration of civilian rule after six decades of dictatorship was at least partially the fruit of one of the Obama administration’s earliest attempts to reach out to a country long denounced by the US Overtures to Iran and Cuba would come later, buoyed in part by what appeared to be success in Myanmar. Sanctions were eased, diplomatic representation bolstered and aid was increased.

Obama made two trips to Myanmar, also known as Burma, as president and his two secretaries of state, Hillary Clinton and John Kerry, each visited the country twice themselves. Clinton’s visit in 2011 was the first by a US secretary of state since 1955. She met with Suu Kyi at the lakeside home where the opposition leader had been held under house arrest for years,

Just six years earlier, President George W. Bush’s Secretary of State Condoleezza Rice had branded Myanmar as one of six “outposts of tyranny” for the military’s refusal to brook dissent and rejection of democratic elections.

And, in 2007, as world leaders gathered at the annual United Nations General Assembly, a crackdown on Buddhist monk-led protests, the so-called “Saffron Revolution,” attracted widespread concern and international condemnation, including high-profile repudiations from Rice and then-first lady Laura Bush.

Thus, the opening initiated by Obama and Clinton in 2010 augured what many hoped would be a new beginning for Myanmar, whose military leaders were then ostensibly concerned about being overly reliant on China for trade and security.

There was initial enthusiasm over the thaw, over Nobel peace laureate Suu Kyi’s elevation to a leadership role despite being barred from running for office, and over Myanmar’s steady but hesitant opening of its once cloistered country. But that soon faded, most notably over the government’s treatment of Rohingya Muslims, who became the target of a ruthless campaign of repression and abuse.

Repeated entreaties to Suu Kyi, who was appointed State Councilor after her National League for Democracy won 60 per cent of the vote, and others on behalf of the Rohingya and other minorities went unheeded. Still, the Obama administration continued to have faith in her.

“Proud of my friend Aung San Suu Kyi and the people of Burma for never giving up in the long struggle to bring change to their country,” Clinton said in 2015, after having devoted an entire chapter of her 2014 memoir “Hard Choices” to the Obama administration’s policies toward the nation.

Despite Kerry’s two trips to Myanmar, the administration became rapidly consumed with the Iran nuclear deal and normalisation of ties with Cuba. At the same time, it was pursuing an ill-fated effort to forge an Israeli-Palestinian peace deal. So Myanmar’s halting and imperfect democratisation was left largely untended by officials in Washington. When President Donald Trump took office in 2017, his administration made no secret of the fact that it was focused less on bilateral ties than in concentrating on a broader effort to blunt China’s growing regional influence.

In November 2017, Trump’s first Secretary of State, Rex Tillerson, made that administration’s only high-level visit to the country and on his return declared that the military-backed violence against the Rohingya in northern Rakhine state amounted to “ethnic cleansing.” Sanctions on the country’s top military leaders followed the next month.

But since then, US attention to Myanmar has been sporadic, dominated primarily by public expressions of disappointment in Suu Kyi, who defended the military crackdown in Rakhine and opposed efforts to initiate and international investigation into it.

Stirrings of the Feb. 1 coup, coming as those elected in November 2020 elections won by Suu Kyi’s party were to take their seats in parliament, did not appear to be a priority in Washington, where officials were preoccupied by domestic political problems of their own.

In its final weeks in office, the Trump administration made no public comments about growing civilian-military tensions in Myanmar despite speaking out about democracy concerns in Venezuela, Tanzania, Uganda, Cuba, Iran and Russia. After taking over on Jan. 20, the Biden administration was similarly silent until January 29 when the US Embassy in Yangon signed onto a joint statement with several other embassies to support democracy in the country and to oppose “any attempt to alter the outcome of the elections or impede Myanmar’s democratic transition.” The warning went unheeded by the military.

“There was a risk that the Burmese generals were playing us,” Clinton wrote about the 2010-11 rapprochement with Myanmar in “Hard Choices.” That fear may have been prescient. 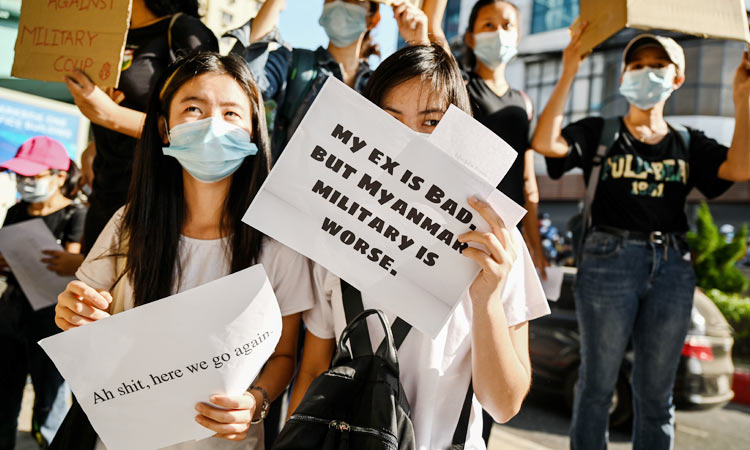