Salgado’s candidacy, a thorn in the flesh for Obrador - GulfToday

Salgado’s candidacy, a thorn in the flesh for Obrador 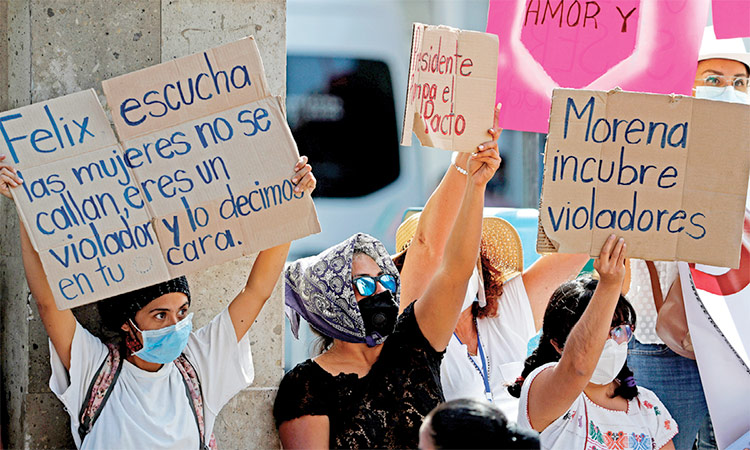 As it became clear last fall that Mexican Sen. Felix Salgado Macedonio would be running for governor of Guerrero state, Basilia Castaneda decided to go public with her accusation of rape.

She told police that back in 1998, when she was a 17-year-old political activist, she found herself alone with him at his Acapulco home. “Without saying anything he started attacking me,” she explained to Milenio newspaper, adding that when it was over he threw a 100-peso bill — about $10 at the time — in her face.

Four other women have also come forward to accuse Salgado of sexual assault, including one who told police she was drugged and raped by the politician in 2016. Those allegations didn’t stop Mexico’s ruling political party from officially making Salgado its gubernatorial candidate this month.

In the face of feminist opposition, Salgado’s candidacy has become a major political liability for President Andrés Manuel Lopez Obrador, who has stood by his longtime friend and political ally.

The accusations have bitterly divided Morena — the centre-left party Lopez Obrador founded in 2011 —  with hundreds of members, including many of its highest-profile women, demanding the party withdraw its support and Salgado be removed from the ballot.

“Side with history, side with the victims, side with women,” a coalition of female party leaders said in a statement last week. But Lopez Obrador has refused to budge, repeating Salgado’s claim that the accusations are nothing more than partisan political attacks.

“When there are elections ... it’s about discrediting the opponent in one way or another,” the president, widely known by his initials, AMLO, said at a recent news conference, describing Salgado as the victim of “media lynching.”

The president has a habit of rejecting any criticism as an unwarranted attack from his political enemies. But that sort of response falls flat when the critique comes from women complaining of violence, political analyst Denise Dresser recently wrote in Americas Quarterly.

The growing number of women calling for an end to gender-based violence in Mexico represents “the one true thorn in AMLO’s side: a singular political movement that he does not seem to understand, cannot control and will be unable to suppress,” she wrote.

Carlos Bravo Regidor, a professor at the public research center CIDE in Mexico City, said that the president is under increasing pressure to recognize their grievances and heed their demands.

“Feminists within and outside of Morena are fighting to make the president feel that if he doesn’t back down, he will have to pay a price,” Bravo said.

Many feminists had high hopes for Lopez Obrador. The long embattled leftist, who ran for president two times before winning election in 2018, vowed complete gender parity in his Cabinet — a promise he fulfilled.

But months after taking office, he angered activists by shuttering shelters for domestic violence victims and closing public day-care centres, part of a broader austerity plan.

Then a series of gruesome incidents in Mexico City thrust the issue of violence against women into the national spotlight.

A teenage girl said she had been raped by four police officers. A man apparently killed and skinned his 25-year-old girlfriend. And then the body of a 7-year-old named Fatima who had gone missing was discovered disemboweled in a garbage bag.

Lopez Obrador blamed the crimes on the “neoliberal” governing model of his predecessors.

Failing to acknowledge the national crisis — an average of 11 women are killed each day in Mexico — he also downplayed a surge in calls to a government hotline for female victims of violence, saying 90% of such calls “are false.”

In response, hundreds of thousands of women from across the political spectrum demonstrated in Mexico City in March. The following day, women across the country skipped work in a national strike, with some of Mexico’s largest companies showing their support by giving female employees the day off.

After female protesters seized control of Mexico’s National Human Rights Commission in the fall, ripping paintings of revolutionary heroes off the walls and declaring that building would become a shelter for female victims of violence, Lopez Obrador was incensed.

“Of course I don’t like it,” he said of the protest, highlighting the protesters’ defacement of a particular painting. The activists said the president’s focus on property destruction rather than on their demands simply proved their point.

An investigation by the news site Animal Politico found that from 2014 to 2018 just 5% of rape and sexual assault allegations resulted in a criminal sentence.

Salgado has not been charged with any crime. The accusations against him started coming to light at the end of last year, just as he prepared to accept the nomination as Morena’s gubernatorial candidate in Guerrero.

Basilia, the woman who said Salgado raped her in 1998, said that she tried to report the assault at the time but that a clerk at the prosecutor’s office advised against it. “This person is very influential, very powerful,” she said the man told her, according to her interview with Milenio. “Go home, live quietly and forget about this.”

She went on to become a prominent leftist activist in Guerrero, eventually helping Lopez Obrador establish his party as a powerful political force there. Salgado joined the party in 2018 and won a seat in the Senate once again.

In fall last year, once it became clear that Salgado would seek the governorship, Basilia went to police. By then, newspapers had started carrying stories about another rape accusation against Salgado.

A woman who worked for Salgado when he briefly ran a newspaper in Acapulco had gone to police in 2016 to say that he had drugged and raped her. She said Salgado recorded a video of the first attack and used it as blackmail to rape her on at least two more occasions.

The investigation went nowhere. The top prosecutor in the state at the time, Xavier Olea, recently told journalists that his office dropped the case after the governor of the state asked him to not arrest Salgado. The prosecutor’s office has since reopened the case.

Women play a growing role in Mexican politics. Thanks to a 2014 constitutional reform calling for parity in the legislature, just under 50% of elected leaders in the Senate and Chamber of Deputies are now women. Paola Zavala Saeb, a human rights attorney and feminist activist, said that representation means that for the first time women are being heard.

For Basilia’s part, she said she hopes that Lopez Obrador will drop support for Salgado. She, too, has been a loyal supporter to Lopez Obrador throughout his political career.

“I hope the president ... can understand that this is not a lie,” she said. Then she made a direct plea: “Mr. President, don’t protect a rapist.”