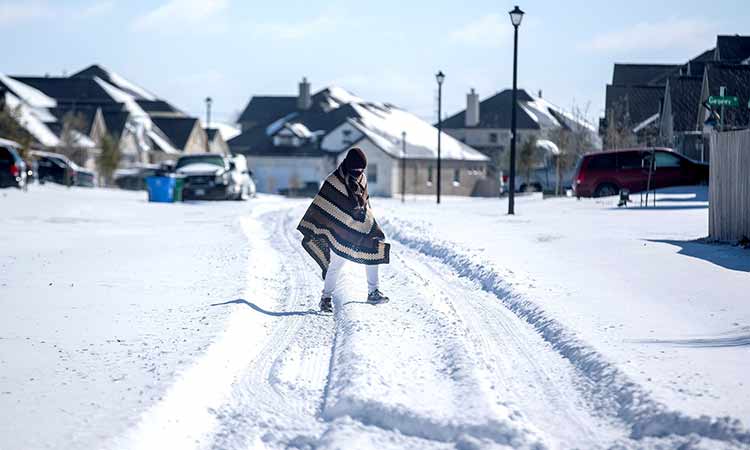 A man walks to his friend’s home in a neighbourhood without electricity as snow covers the BlackHawk neighbourhood in Pflugerville, Texas. File/Reuters

In Galveston, Texas, folks are all too used to natural disasters — but warm and wet ones from the Gulf of Mexico, like the notorious hurricane of 1900 that killed thousands. Nothing could have prepared the beachfront city for the icy dagger of a polar vortex attacking from the north with snow, ice and a prolonged deep freeze. As county officials already reported at least two and possibly six deaths from exposure to the cold amid widespread power outages, they asked for a refrigerated morgue truck to deal with even more fatalities as the crisis persists.

“Where we are now in Austin: people are out of food,” Conor Kenny, a former chair of the Texas capital’s planning commission, reported Thursday morning on Twitter. “Half the city still (without) power or heat. Citywide boil notice and little/no water pressure. Roads (bleeped). Stores closed. High of 34 lows in 20s next three days. It’s bad. Real bad. This is our Katrina.”

Indeed. The once-in-a-lifetime freeze that has enveloped all of America’s second-most-populous state (and its southernmost of the continental 48) is on the brink of becoming one of the nation’s public health crises of a new millennium that has already seen far too many disasters — both natural and human-made, but usually blending both. The frigid suffering of millions without electricity, water or food, and the mounting death toll, is the kind of tragedy that should transcend our bitterly divided politics — but you shouldn’t be shocked to learn that the polar opposite has happened.

The icicles from thousands of burst water pipes had barely started to grow when the state’s overwhelmingly Republican political leadership took to social media and the friendly airwaves of Fox News or talk radio. They bashed their liberal enemies and blamed the statewide power outages on wind power — a growing factor on the Texas grid, although far from dominant — and a Green New Deal for clean energy, even though the GND hasn’t truly been implemented in the Lone Star State or anywhere else.

“This shows how the Green New Deal would be a deadly deal for the United States of America,” Texas Gov. Greg Abbott said Tuesday night on the pinnacle of right-wing media, Fox News’ Hannity, before spouting misleading or wrong stats on the role that wind or solar power has played in the fiasco. Abbott was amplified by fact-free Fox News anchors like Harris Faulkner, who bizarrely blamed “the vilification of oil, gas and coal — the stuff that really keeps you warm.” Then, Rick Perry — the former Texas governor who became Donald Trump’s energy secretary — took it next level by actually hailing the lethal disaster as a good way for Texans “to keep the federal government out of their business.”

None of this has any grounding in reality. Although the growth of wind power in Texas has been a surprising bright spot on America’s road to cleaner energy, problems with wind turbines failing in the ice storm have caused only a fraction of this week’s power-supply problems. And, as energy experts note, wind turbines in places like Scandinavia or America’s northern plains don’t freeze up because their owners spend a little more to weatherize them. In the Wild West of deregulated Texas, where few imagined winter weather anything like this week’s storm, wind-power producers hadn’t bought warming equipment — but fossil-fuel producers have been even more negligent.

The truth is that frozen equipment or supply problems at power plants that rely on thermal sources — primarily fossil fuels such as natural gas and goal but also nuclear — have been the source of the majority of the Texas electricity drain. Experts say that blueprints expected natural gas to provide 66% of the state’s energy during a severe winter storm, but roughly half of those plants were not functioning for one reason or another — causing the massive blackouts.

The underlying problem is not any kind of Green New Deal-related socialism but rather Texas’ zealous free-market capitalism that leads to deregulation and distrust of federal cooperation. The state’s insistence on maintaining its own electricity grid separate from the nation’s two big, interlocking systems — thanks to its libertarian paranoia about control from Washington — created few options for outside help when the polar vortex struck. In El Paso, connected to the national western grid and not the Texas one (and which spent more on winterizing), only a handful of homes lost power.

“When you have a more deregulated, market-based system, it’s not clear whose responsibility it is when it fails,” Daniel Aldana Cohen, a University of Pennsylvania sociologist who directs a climate-change project and co-authored “A Planet To Win: Why We Need a Green New Deal,” told me this week.

Although clean energy sources like wind and solar are now growing rapidly as their costs become cheaper, there is still nowhere near a coherent national energy strategy that resembles the GND that’s been implemented ... yet. But it’s easy to see how a massive clean-energy crusade could help prevent Texas-sized outages in the future.

For one thing, spending trillions to create the necessary post-carbon energy regime in America would surely include money for weatherizing wind turbines and other clean energy sources — essential as our ongoing climate crisis keeps creating new weather extremes. More importantly, as Cohen noted in our interview, a Green New Deal would mean spending on long overdue infrastructure like new transmission lines that would make for a more reliable national grid. It’s imperative that the new Biden administration avoid the mistakes and timidity of the Obama government, which backed away from a proposed grid overhaul because of concerns over issues such as jurisdiction.

Cohen said the federal government can offer incentives to neighbours of new transmission lines — such as free heat pumps, which was used as a carrot for a project in Maine — to facilitate this needed infrastructure. It can also do more to improve emergency management, as an acknowledgement of the growing number of extreme weather events. Said Cohen: “You can’t prevent climate change as it exists now — it’s baked in. What we’re trying to prevent is an extreme apocalypse.”

Indeed, the irony of attacking the Green New Deal for the crisis in Texas is that an aggressive war on greenhouse-gas pollution is the best way to ensure fewer bouts of extreme weather like this deep freeze — maybe not for 2021, but in the long run. Although it’s difficult to link any one specific weather episode to climate change, the overall warming of the planet has been linked both to the extreme migrations of polar vortexes and the collapse of Gulf stream air currents that might stop cold waves like the system that invaded Texas.

Politically, what’s so disheartening about this whole episode is that it comes so closely on the heels of the vast majority of the Republican Party — including Texans like Sen. Ted Cruz, who broadened his escapes from reality by trying to get away to Cancun — embracing so the so-called “Big Lie” that the 2020 presidential election was stolen from Trump. That the party’s next big move was a pretty big lie about the Green New Deal reveals the uphill climb that America faces, just to get back to a playing field of reality to have any meaningful policy debates. Our nation can’t handle the climate crisis until we can handle the truth, without one nearly dead political party tilting at windmills. 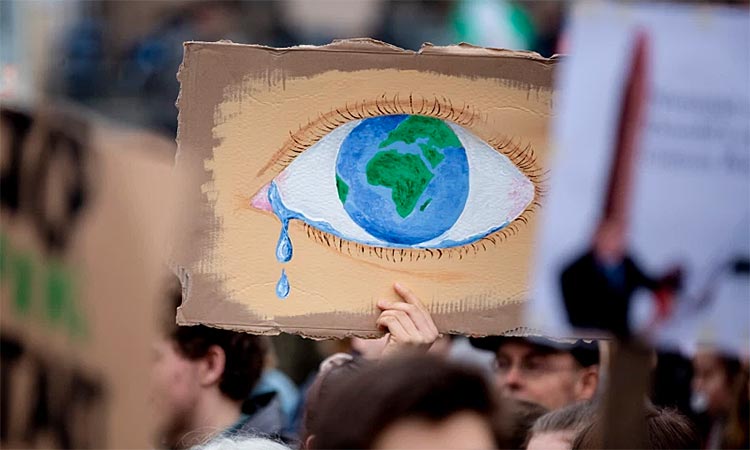