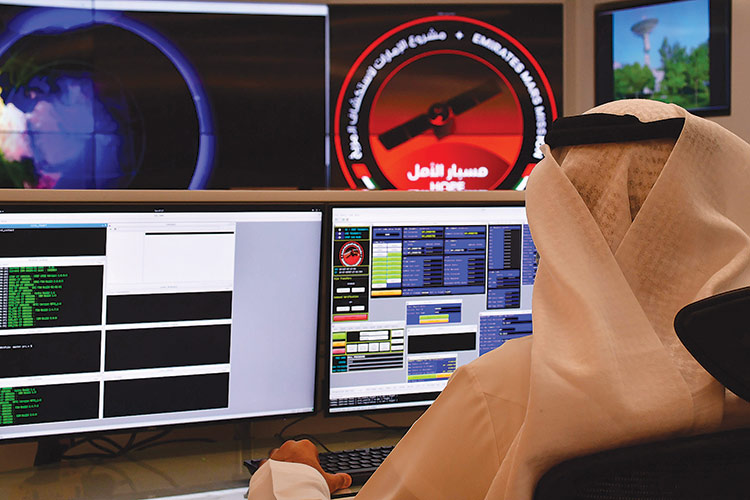 The success of the Hope Probe is a result of determination and persistence shown by Emirati youth.

“Hope can be a powerful force. Maybe there’s no actual magic in it, but when you know what you hope for most and hold it like a light within you, you can make things happen, almost like magic.”

American author Laini Taylor’s words could not be truer. In fact, she could be well talking about the Hope Probe. Making it happen was a feat bordering on the dramatic or miraculous, for an odyssey to Mars requires a lot of labour, perseverance and patience. The Emiratis, particularly the young scientists behind the epic space venture, have shown that they are not lacking in such qualities. It is therefore no wonder His Highness Sheikh Mohammed Bin Rashid Al Maktoum, Vice President, Prime Minister of the UAE and Ruler of Dubai, appreciates their efforts, stressing that the success of the Hope Probe is a result of determination and persistence shown by Emirati youth.

His Highness Sheikh Mohammed confirmed that empowering young Emiratis is an established approach that the UAE has believed in since the establishment of the Union. “Our country celebrates the Hope Probe breaking into orbit around Mars, a historic milestone that marks the beginning of the coming 50 years.”

Having travelled more than 493 million kilometres over the past seven months, millions in the UAE, and around the world have eagerly awaited to see the first image taken by the Hope Probe, which will be immortalised in history as the first image of an Arab probe to reach Mars.

They did not have to wait long. To add another feather to its cap of laurels, the Probe has sent the first image of the Red Planet. Titled ‘EMM catches Olympus Mons at Sunrise’, the picture was taken by the EXI digital exploration camera, one of EMM’s three scientific instruments. It is a multi-wavelength radiation tolerant camera that can take 12-megapixel images.

What is amazing is that the image was taken from an altitude of around 25,000km above the Martian surface. Yet it looks surprisingly very clear, almost as though it were up close and personal, the massive distance notwithstanding.

Mars (we often imagined how much of ‘red’ the Red Planet was) was a planet that was unexplored, which appeared to be beyond reach, until the space explorations began. That the Hope Probe would not land in its orbit but also start clicking, like a seasoned lensman, some amazing pictures from a totally different region, was a totally different feeling altogether.

The UAE Space Agency was established in 2014 and sending Mars Probe in such a short period of seven years is truly unprecedented in the history of global space development.

The mission of Al Amal observing the Mars atmosphere and its climate for a whole year will be a major breakthrough in finding constant change around the Mars.

Little wonder then that other countries would love to emulate the UAE model and join in the space adventure. South Korea, for instance, expressed its desire for joint Moon and Mars explorations with the UAE.

The Hope Probe, launched in July 2020, was successfully inserted into orbit around Mars on 9th February, marking the Arab world’s entry to the global space race and placing the UAE as the first Arab nation, and the fifth in the world, to reach the red Planet.

As Arthur C. Clarke, the celebrated science fiction writer, said, “The only way of discovering the limits of the possible is to venture a little way past them into the impossible.” And yes, the word ‘impossible’ does not exist in the UAE dictionary. Mars has proved that.