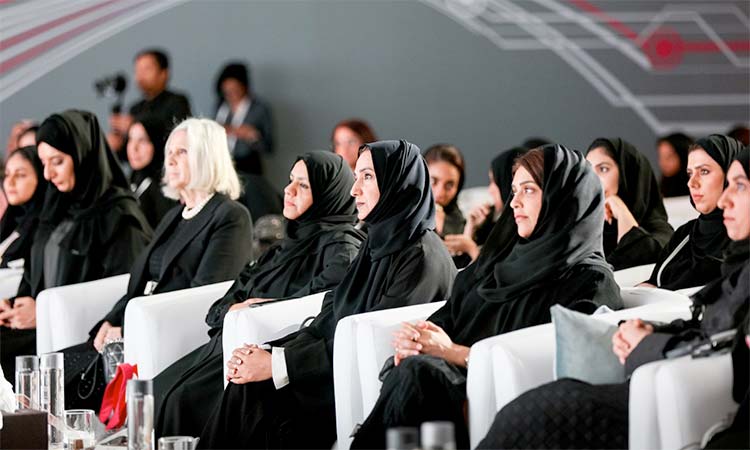 The UAE women are playing an important role in every walk of life in the country. WAM

The news that the UAE is spearheading the cause of women’s rights all over the world is heartening, to say the least. It shows that it shows full-on care for their plight and seeks to advance their cause to the best of its ability.

The UAE tops advanced ranks on many global indicators related to supporting women’s rights and empowerment, and unprecedented achievement globally in achieving equality in parliamentary representation during the 16th legislative chapter of the Federal National Council.

When it comes to championing women’s issues the first eminent luminary whose name should be mentioned is Her Highness Sheikha Fatima Bint Mubarak, Chairwoman of the General Women’s Union (GWU), President of the Supreme Council for Motherhood and Childhood, and Supreme Chairwoman of the Family Development Foundation (FDF. She is considered the first champion of women worldwide thanks to her efforts in this field. For years, she has backed conferences in the Arab, international and Islamic worlds to empower women and enhance their stature.

Under the generous patronage of Her Highness, the UAE hosted in October 2019 a ceremony and symposium for the launch of the ‘Arab Document on Women’s Rights in the UAE’, organised by the Federal National Council in cooperation with the Arab Parliament.

The UAE has a strong and growing relationship with UN Women.

The UAE has provided the UN Women – since its inception in 2010 – with financial support amounting to about $26 million, to strengthen its efforts to empower women worldwide.

The UN Women Liaison Office for the GCC has launched the “Women Peace and Security Training Programme,” which aims to prepare female military officers for UN peacekeeping operations and increase the pool of female military officers. Education is considered essential for women’s economic empowerment, and according to the World Economic Forum 2014 report on the gender gap, the UAE has been able to achieve equality between men and women in educational attainment, as 77% of Emirati women enrol in higher education, representing 70% of university graduates.

During its membership in the United Nations Human Rights Council, the UAE highlighted its fundamental belief that women and men are equal partners in society, promoting the equal right to education by every girl. In June 2017, the UN Human Rights Council unanimously passed a draft resolution put forth by the UAE during the 35th session of the Council in Geneva on the right of girls to receive an education. The resolution called upon states to eliminate obstacles to girls’ education, including discriminatory policies, poverty, tradition, religious considerations, or financial hardship. It also called for additional action to ensure the safety of girls outside the school perimeter against sexual violence and threats posed by terrorist groups.

The UAE also initiated a joint statement by 75 countries at the Human Rights Council in June 2014, which condemned attacks on girls because they attend or wish to attend school.

Mention must be made of the pivotal role Emirati women play.

Emirati women have been one of the cornerstones of the nation’s development since it was founded in 1971. Emirati women have proved that they are no less than their male counterparts, whether it is in the field of science, education, politics or aviation.

In fact, even outer space is not the limit for the Emirati woman’s ambition. This is evident from the fact that out of the 4,300 persons who have applied for the UAE Astronaut Programme, 1,400 are Emirati women.

Gender parity meshes with the very fabric of the UAE, unlike other countries. In this regard, the UAE’s initiatives to catapult the advancement of its women to centre stage are praiseworthy.