Trump may not be convicted of impeachment - GulfToday 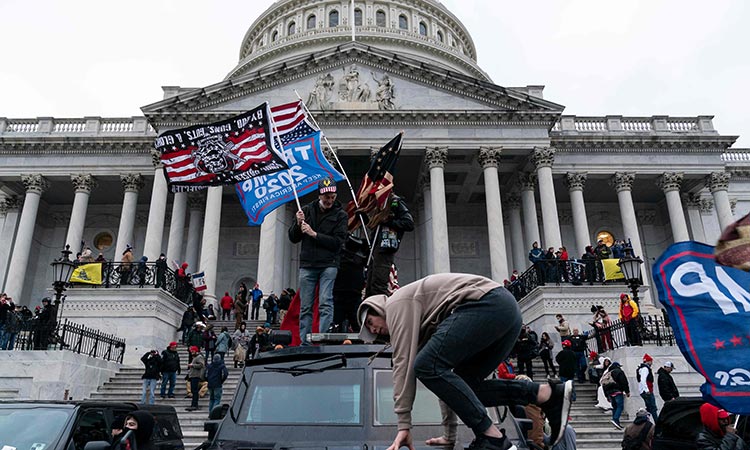 Supporters of US President Donald Trump protest outside the US Capitol in Washington. File/AFP

Donald Trump's impeachment trial formally opens in the divided US Senate tomorrow with little expectation he will be convicted. He faces the sole charge of "incitement of insurrection" which led to the January 6th invasion and occupation of the Capitol in Washington as legislators were about to confirm the victory of Democrat Joe Biden in the November presidential election.

Trump will be prosecuted by a team of Democrat lawmakers from the House of Representatives which voted on January 13th to impeach him on charges of misconduct while he was still in office.

The trial could have promptly followed impeachment but the then Republican Senate majority leader Mitch McConnell refused to convene the body to proceed with this effort. It did not meet until January 19th, the day before Trump stepped down from the presidency.

Democrats will argue that Trump committed "high crimes and misdemeanours" by inciting violence while addressing a rowdy crowd of his supporters outside the White House on the morning of the attack on the Capitol. This was proceeded by his call for them to travel to Washington to protest Biden's elevation on that day and his claim the election had been stolen after it became clear Biden had won. It is significant that a large number of Capitol rioters were not conspiracy-minded loonies or white supremacists, who comprise Trump's hard core, but ordinary folk. They were motivated by their support for him to travel to Washington to do his bidding. The case against him is irrefutable. Trump did all these things. A solid majority of Republicans do not claim he is innocent but only that he cannot be tried now.

His lawyers will contend it is unconstitutional to charge him as he is no longer in office and cannot, therefore, be removed if convicted. They will cite impeachment precedents in US history which could serve both sides and therefore are not conclusive. Trump has refused to appear before the Senate as he dismisses his second impeachment by the House and argues his actions are protected by the First Amendment of the US Constitution which guarantees freedom of speech — but not freedom to incite.

The trial is likely to be brief, days rather than weeks. Neither side is eager for drawn-out proceedings. Democrats seek to return to confirmation hearings for Biden's cabinet nominees while Republicans want to minimise public relations damage by lengthy exposure of Trump's misdeeds. There will be opening statements by prosecution and Trump lawyers. Democratic managers have not said whether they will call witnesses but will present video material showing Trump inciting his supporters to storm and vandalise the Capitol and take on Democrat lawmakers who refuse to accept his claim that he won the election. Five people were killed, including a Capitol policeman, and many were injured in the melee and hundreds have been arrested.

Conviction is unlikely. Democrats have to secure 67 votes, or two-thirds of the 100-member Senate but since it is divided equally between Democrats and Republicans, with the majority of the latter rejecting impeachment and trial, conviction will be difficult if not impossible. However, The Washington Post has published a graphic and the names of senators to show where they stand at this time – before the trial begins.

There could also be more defections, two have been added to the ten Republicans who supported impeachment in the January vote. As this was the first time members of a Senate majority grouping ever voted to impeach a president from their party, it reflects the split in the Republican party. Both Republicans and Democrats voting for conviction could be motivated by the fact that if this is achieved, Trump will be permanently barred from public office.

Well aware that the trial almost certainly will not result in conviction, why have Democrats chosen to proceed? Recalcitrant Republicans argue the Senate could have simply censured Trump.

This was never an option for Democrats. They seek to portray themselves as belonging to the party of truth and decency and are committed to the rule of law in contrast with a Republican party which has abjured all three attributes.

The Democrats are right. For years now the Republicans have veered rightwards and allowed their party to be captured by "loonies," conspiracy theorists, gun-toting thugs, and white supremacists. Trump exploited the vulnerabilities of these groups to become their saviour and cult leader.

For him, truth, decency and the rule of law simply do not matter. During his four years in the White House, he told more than 3,500 lies and mistruths, behaved outrageously, and not only violated one law after another but also pardoned subordinates and allies who did.

His time in office left the US in a shambles, particularly on the coronavirus front, and he lost the 2020 election because of his refusal to tackle COVID-19. He initially dismissed the global pandemic as a "little flu" and remained in denial even though he, his wife and children were infected.

He failed to halt its spread by refusing to urge fellow citizens to mask, wash hands, and social distance, and did little or nothing to provide protective gear and equipment for those treating victims of the deadly and debilitating virus. Consequently, the US, which claims to be the most medically advanced country in the world, has had nearly 27 million cases and 460,000 deaths. The death rate now hovers between 3,000-4,000 daily. While the US has only 4.24 per cent of the world's total population, it has 20 per cent of COVID infections.

Unable to reverse the disastrous impacts of Trump's terrible COVID policies, Biden is doing his best to curb the spread of the virus, provide treatment, and vaccinate the population as quickly as possible. Despite his call for bipartisan support, Trump's Republican acolytes continue to reject the dangers of COVID contagion and threaten to undermine the effectiveness of Biden's plan to battle the virus, vaccinate more than 50 per cent of the population, and provide financial aid to millions of citizens who have lost jobs and businesses. Stubborn Republican opposition has forced Biden, who refuses to waste time, to marshal Democratic support in both houses of Congress, where his party has slender majorities, in order to proceed with this programme without most Republicans.

Bipartisanship and unity could be forgotten in the drive to deal with the results of Trumpian mismanagement. Biden's drive to fight Covid and economic decline has, so far, impressed the public.

Two weeks into his presidency, his approval rating was 61 per cent; Trump never exceeded 50 per cent during his time in office.