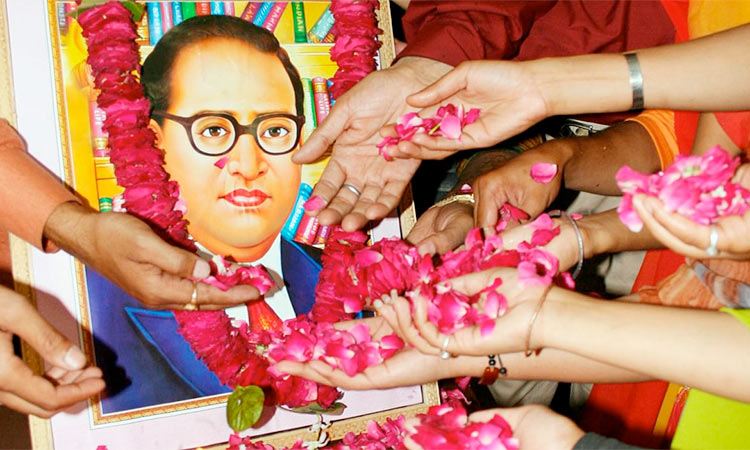 Dr Babasaheb Ambedkar is widelly regarded as the father of Indian Constitution. Reuters

As India enters its 72nd year as a republic, there is widespread concern in the country over the health of its democratic system.

Eager to rebuild society on modern lines, the Congress, which led the freedom struggle, had approached some British experts for help in framing a democratic constitution.

One expert asked why India was looking for outside help when BR Ambedkar, who had played a role in the drafting of the Government of India Act 1935, under which the country was being governed at that time, was available there.

This prompted the Congress to offer the chairmanship of the Constitution drafting committee to Ambedkar, a leader of the depressed classes.

The Rashtriya Swayamsevak Sangh, the ideological parent of the Bharatiya Janata Party, which now heads the government at the Centre and in several states, wanted Manusmriti, an ancient work which says men are born unequal and women do not deserve freedom, to be made the Constitution.

The Constituent Assembly came up with a document which proclaimed India a democratic republic where all citizens are equal, regardless of caste, religion and gender. It was not a directly elected body. Many of its members were chosen by provincial legislatures which were themselves elected on limited franchise.

It adopted the Constitution in the name of We the People of India.

The many changes of government that have occurred at the national and state levels in the last seven decades on the basis of elections testify to India’s status as a working democracy.

But democracy involves more than elections. It must find expression in the conduct of an elected government. Harsh measures of colonial vintage, dubbed as black laws, have been a part of Indian democracy all along.

The first BJP Prime Minister, Atal Behari Vajpayee, who held office from 1999 to 2004, kept aside his party’s sectarian agenda, which is not in tune with the constitutional ideals of democracy and secularism, taking into account the sentiments of its National Democratic Alliance partners.

Narendra Modi led the BJP back to power in 2014, riding a wave of discontent against the Congress-led United Progressive Alliance.

On the first anniversary of the Modi government, RSS supremo Mohan Bhagat travelled to Delhi to review its working. The exercise caused embarrassment to Modi and was not repeated.

After winning a new mandate in 2019, Modi pushed through Parliament several measures which formed part of his party’s sectarian agenda or his economic reform package. Among them are the laws that altered the status of Jammu and Kashmir, introduced religion as a criterion in the grant of citizenship and opened up the agriculture sector to corporates.

The Supreme Court received a spate of petitions challenging the constitutional validity of these measures. It has not taken them up for consideration. This has led to critics labelling it as “executive court” and “court of supreme indifference.”

The Citizenship Act amendment led to a rash of street protests. The restrictions imposed to check the spread of COVID-19 forced the protesters to pull out. The farm laws were brought in while the pandemic was raging. Farmers immediately began protests.

Since the end of December, hundreds of thousands of farmers from neighboring states are camping on Delhi’s borders, braving a harsh winter. In talks with the Centre they have refused to settle for anything less than repeal of the farm laws.

There is a consensus among the opposition parties that many of the Modi administration’s acts pose a grave threat to democracy. Ironically, BJP leaders are also talking of threats to democracy.

Articulating the BJP view, A Surya Prakash, a former head of the state television network, cited the protests against laws passed by Parliament as proof of threats to democracy and asked “the majority” to be alert.

This was a clear exposition of the majoritarian approach of the BJP which assumes that a parliamentary majority, gained on a minority of votes in a divided polity, allows it to make laws without consultations with people who are likely to be affected adversely by them and ram them down their throats.

It also betrays the party’s inability to understand that right to dissent is an inalienable part of democracy.