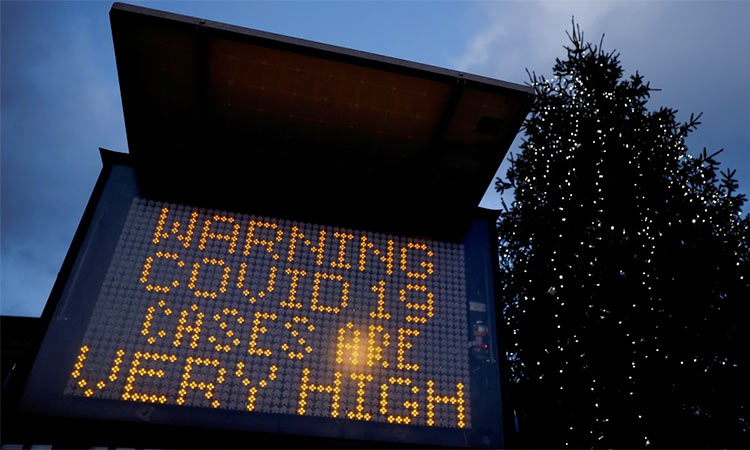 A warning is displayed as the UK government imposes a stricter tiered set of restrictions amid the coronavirus disease pandemic, in London. File/Reuters

A leading scientist has defended the government’s decision to describe the new coronavirus variant as more deadly after others claimed the proof is still vague.

There is some evidence that a new coronavirus variant first identified in southeast England carries a higher risk of death than the original strain, the British government’s chief scientific adviser said on Friday — though he stressed that the data is uncertain.

Patrick Vallance told a news conference that “there is evidence that there is an increased risk for those who have the new variant.”

He said that for a man in his 60s with the original version of the virus, “the average risk is that for 1,000 people who got infected, roughly 10 would be expected to unfortunately die.”

But Vallance stressed that “the evidence is not yet strong” and more research is needed.

In contrast to that uncertainty, he said, there is growing confidence that the variant is more easily passed on than the original coronavirus strain. He said it appears to be between 30% and 70% more transmissible.

Professor Peter Horby, who chairs the government’s New and Emerging Respiratory Virus Threats Advisory Group (Nervtag), defended Boris Johnson’s decision to reveal the information on Friday, adding, however, that the risk of the strain being more deadly was still “very, very small” to most people.

His comments come as other scientists cast doubts about the news that the variant was more deadly, saying it was still an “open question”.

Public Health England medical director Dr Yvonne Doyle said it is still not “absolutely clear” that the new variant is more deadly, adding that there are “several investigations going on at the moment” and more work needed to be done to determine if that was actually the case.

British officials say they are confident that the vaccines that have been authorised for use against COVID-19 would be effective against the new strain identified in the country.

Worries about newly identified variants have triggered a spate of new travel restrictions around the world. Many countries have closed their borders to travellers from Britain, and the UK has halted flights from Brazil and South Africa.

Britain has recorded 95,981 deaths among people who tested positive for the coronavirus, the highest confirmed total in Europe. The UK is currently in a lockdown in an attempt to slow the latest surge of the coronavirus outbreak.

The number of new infections has begun to fall, but deaths remain agonisingly high, averaging more than 1,000 a day, and the number of hospitalised patients is 80 per cent higher than at the first peak of the pandemic in the spring.

The evidence for the new variant being more deadly is in a paper prepared by a group of scientists that advises the government on new respiratory viruses, based on several studies.

The fact is, we have to live with the coronavirus in one way or another for a long while to come. It is still up in the air when measures could be eased.