Now, Caribbean people have a reason to celebrate - GulfToday 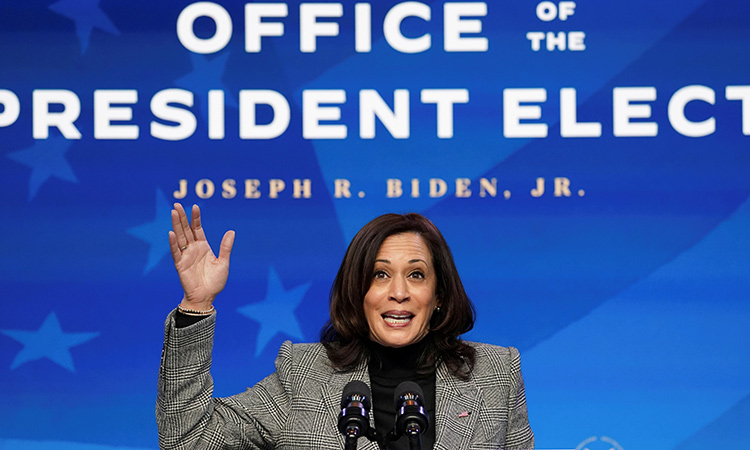 US Vice President-elect Kamala Harris speaks at the transition headquarters in Delaware, US.

As the US’s next vice president, Kamala Harris is a person of many firsts: the nation’s first female, first Black, first South Asian American and first Jamaican American to hold the second highest office.

But on Sunday it was Harris’ Caribbean roots that took centre stage, as artists, politicians and other luminaries from Antigua to Barbados to Jamaica feted her historical rise as “America’s first Black Caribbean American” vice president in a virtual celebration ahead of Wednesday’s inauguration.

“You helped lay the ground work for this historic occasion,” she said. “And now because of you, and so many others, our country is on a path to heal and rebuild.”

Harris acknowledged those who came before her and helped pave the way for her barrier-breaking win. They include former US Attorney General Eric Holder, who is of Barbadian descent; former US Secretary of State Colin Powell, who is of Jamaican heritage; and the late Shirley Chisholm, the first Black woman to run on a major party ticket for president and serve in Congress. Chisholm was of Barbadian and British Guyanese background.

“The contributions of the Caribbean American community are indeed woven throughout the fabric of our country and those contributions are reflected in the lives of so many Americans with Caribbean roots,” Harris said. “And I’m proud to be with you as a vice president-elect with roots in the Caribbean.”

“You have inspired many of us from all over the world,” he said.

Others paid tribute to Harris’ strength “as a Jamaican woman” and the Caribbean culture from which she hails.

In a reminder of the pandemic’s toll and the critical role of Caribbean American front-line workers, organisers also showcased Guyanese American physician Michelle Chester, who administered the first COVID-19 vaccine in the US. Also featured was Sandra Lindsay, a Jamaican American, the first person to receive it. Lindsay, a critical care nurse at the Long Island Jewish Medical in Queens, New York, received the vaccine from Chester last month.

“Her values and her visions are a part of this long Caribbean journey to democracy,” said Beckles, who is also chair of the CARICOM Reparations Commission, which is pushing European nations to pay reparations in the form of better health care in the region. “We have every right to celebrate her as an internal product of who we are, the Caribbean family. She is an expression of the Caribbean’s family journey into the future.”

Like many with a West Indian background, Persaud, who is Guyanese American, was upset that much of the coverage of Harris before and after Nov. 3 overlooked her Caribbean heritage, instead focusing on her East Indian roots. Harris’ father, Donald J. Harris, is a Jamaican immigrant who came to the US in the 1960s to get his Ph.D. in economics, and eventually became a professor of economics at Stanford University in California.

Her late mother, Shyamala Gopalan, who died in 2009, was an Indian immigrant.

“We delivered all across this country and we are the ones who sung it over in many places, including Georgia and Philadelphia,” Persaud said about Caribbean American voters in a Miami Herald interview ahead of the event.

While the number of Caribbean American voters is hard to ascertain, US Census data shows the community growing in key states. Other data indicates they are increasingly becoming naturalised US citizens, making them eligible to vote. The Caribbean Association of Georgia, for example, estimates there are over 400,000 people of Caribbean heritage in the state.

Caribbean Americans played a critical role in the tight runoff for Georgia’s two US Senate seats on Jan. 5, as well as in the presidential race, especially in states like Florida, where Harris’ Jamaican background boosted excitement.

Not lost on Democrats, the Biden campaign tried to maximize that support in the final stretch, as Harris made not just one, but two visits to Miami Gardens. Florida’s largest majority Black city, it is affectionately known as “Little Jamaica” because many residents have Jamaican roots. While speaking at Florida International University’s main campus in Miami in a final get-out-the-vote effort on Nov. 2, former President Barack Obama was greeted by a display of Caribbean flags as he, too, acknowledged how critical the community is.

“This is the launch of something bigger,” said Persaud, who is determined to have the incoming administration take notice of Caribbean voters. “It is the launch to say, ‘We’re here. We’re celebrating you, but we’re also going to be watching you and making sure that the Caribbean is not ignored anymore; that Caribbean voters are not dismissed and taken for granted.’“

Much like with Hispanic voters, Caribbean Americans have issues that they would like the incoming Biden-Harris administration to address. Their concerns are not just related to their lives in the US, but their Caribbean homelands, whose leaders had grown increasingly disenchanted with US foreign policy during the past four years under President Donald Trump.

Critics accuse the Trump administration of not only allowing Venezuela’s crisis to drive policy decisions, as well as the US’s relationship with its Caribbean neighbours, but also using it to divide the region while ignoring concerns over issues like climate change.

“Our community is hurting in a lot of ways and they’re just silent,” Persaud said, citing a long list of community concerns, from immigration to health care.

For her part, Harris, who spoke near the end of the event, acknowledged that there is much work ahead.

“Our nation continues to face challenges from the coronavirus pandemic to this economic recession, from our climate crisis to a long overdue reckoning with racial injustice, to healing and strengthening the democracy we all cherish” she said. “But we are ready to get to work and we are filled with a sense of purpose.

“Winning this election was not the end of our work,” she added. “In very important ways it was the beginning.”