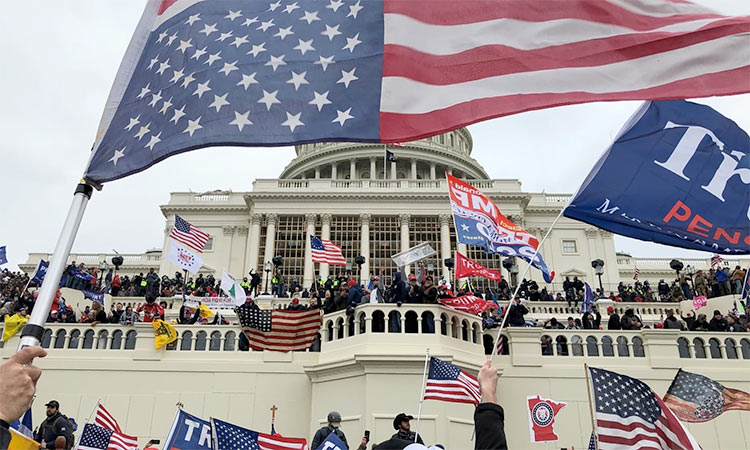 Supporters of President Donald Trump occupy the US Capitol Building in Washington on Jan 6. Reuters

Defeated and humiliated as a “loser” Donald Trump has learned nothing from the Jan.6 invasion of the Capitol, home of the US legislature, by his rowdy supporters and has called on them to protest again on the Jan.17 against President-elect Joe Biden’s inauguration. Claiming the right to freedom of assembly and free speech guaranteed by the US Constitution, militants are also making plans to demonstrate near the Capitol on the Jan.20 during the inauguration ceremonies on the steps of the building.

Following the failure of police and national guardsmen to prevent the invasion by Trump rabble, a 2 metre fence now encloses the Capitol and security forces have been deployed nearby to prevent a second attack. The Federal Bureau of Investigation (FBI), the Capitol police, Washington’s police force, and the National Guard cannot afford another disaster by underestimating Trump’s ability to marshal a mob motivated by conspiracy theories, white grievances, marginalisation, fake news and, above all, Trump’s accusation that the election was “stolen” from him.

Ashli Babbitt, the woman killed by a police officer during the chaotic invasion was deeply involved in a crack-pot conspiracy group calling itself QAnon. A 35-year old Air Force veteran who served in Iraq and Afghanistan, Babbitt rejected masking and social distancing as means to curb covid infection and responded angrily to lockdown to prevent virus spread southern California where she lived and ran a company for pool services and supply. She was killed as she attempted to thrust through a door’s glass panel to reach Congressmen and women cowering from the invaders at the end of a hallway. The officer fired when thugs began to break down the door.

QAnon emerged as a crazy conspiracy theory during Trump’s first presidential campaign and has used social media to grow into a mainstream movement that influences hundreds of thousands who believe it seeks to eliminate evil in the world. Many of its adherents become obsessed with its theories and spend many hours a day communicating with each via the internet, building determination to take action on Trump’s behalf. The movement has been branded a domestic terror threat since 2018.

Babbitt subscribed to QAnon’s fundamental tenet that Trump is battling satan-worshipping cannibals and child abusers and traffickers in government, business and the media. Fellow believers argue that this contest will climax in a day of reckoning when prominent people, including Trump’s ex-rival Democrat Hillary Clinton would be detained and executed. QAnon began as a loony conspiracy theory invented and promulgated by unknowns; its believers accept cockeyed conspiracies peddled on internet sites as well as by right-wing television and radio outlets. Fake news forms their daily diet.

The outrageous notion that Clinton and other senior Democrats would be involved in child trafficking rings based at pizza restaurants originated with the far-right and was spread during the 2016 presidential election campaign when adopted by QAnon. This conspiracy theory merged with Clinton’s use of private e-mail accounts instead of secure government providers while she was secretary of state and prompted Trump to chant, “Lock her up,” when addressing crowds of supporters.

Asked at a press conference about QAnon, Trump responded, “Well I don’t know much about the movement, other than I understand they like me very much — which I appreciate. I’ve heard these are people that love our country.” For Trump loving the US is the same as loving him.

White supremacists, including Proud Boys and Oath Keepers, joined QAnon conspiracy adherents in the assault on the Capitol. Neo-Nazis and Skinheads were also represented. The Proud Boys is a male-only, neo-fascist organisation which emerged in 2016-17 and takes part in political violence in the US and Canada.

Proud Boy head Enrique Tarrio, of Cuban-American extraction, was detained ahead of the Capitol affray for torching a “Black Lives Matter” flag stolen in December from a historic Black church in Washington. A jail bird, Tarrio joined the Proud Boys in 2017 and attended the violent “Unite the Right” rally in Charlottesville, Virginia, where hundreds of white supremacists and neo-Nazis protested the removal of a statue of secessionist general Robert E. Lee from the university campus. A woman also died at that event when a protestor slammed his car into counter-demonstrators.

The Southern Poverty Law Centre regards the Proud Boys as an anti-Muslim misogynistic hate group which openly backs Trump. During his campaign debate with Democratic rival Joe Biden, Trump refused to condemn the group and called on its members to “stand back and stand by” for his orders.

The command came in mid-December to gather in Washington on Jan.6 to demonstrate against Biden’s formal Congressional confirmation.

Oath Keepers is a far-right, anti-government, extremist association of former and current members of the military and police, firefighters and first responders founded in 2009 to “defend the US Constitution from all enemies, domestic and foreign.” They don military fatigues and flak jackets and carry automatic rifles in confrontational situations and intervene against officialdom on behalf of local people seeking to engage in illegal activities. The Oath Keepers’ adoption of Trump is ironic as he is an autocrat who believes himself king.

Present in the US since World War II, neo-Nazis have formed several factions which adopt varying degrees of Hitler’s Nazi ideology and anti-Muslim, anti-Black and anti-Jewish attitudes.

Last year the FBI put neo-Nazis on the same level of threat as Daesh and said the terror threat posed by these groups is both “diverse” and “unrelenting.”

Marginalised, undereducated, and frustrated men and women have been primed to accept conspiracy theories and fake news by Infowars, a far right and conspiracy website established in 1999 by Texas businessman Alex Jones. Infowars, which has millions of viewers, not only promulgates conspiracy theories and fake news but also sells a wide range of products which finance its media activities. It is significant that Inforwars declared election fraud in the 2016 election as well as in 2020 by claiming that millions voted illegally. This would back up Trump’s false claim that he won the popular vote in that election rather than Clinton who secured nearly three million more votes than he did but lost the Electoral College. In 2020, Biden won seven million more votes than Trump as well as the Electoral College.

Those drawn to Trump’s Capitol protest represented the whole of society: lawyers, doctors, local officials and state lawmakers, police officers, military veteran, construction workers, and nurses. While many may not be hooked on conspiracy theories, they believe Trump’s charge that the election was “stolen.”