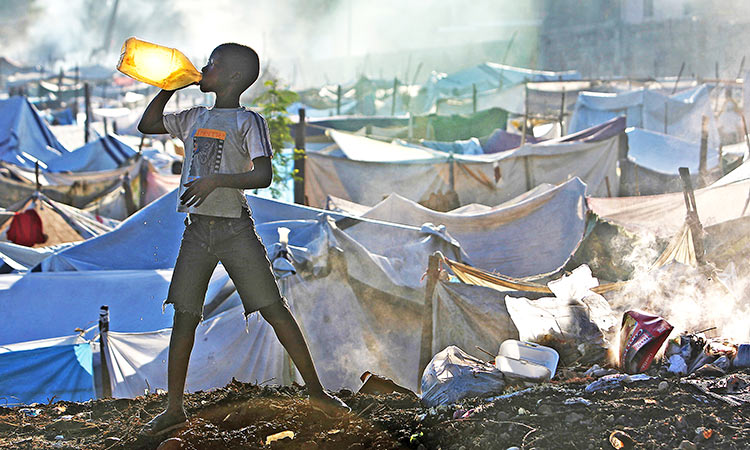 Homeless after the earthquake, Rudeson Laurent , drinks water inside the Daihatsu tent camp on the outskirts of Port-au-Prince, Haiti. File/Tribune News Service

In the past decade, thousands have voyaged from Chile, where the government in December 2019 estimated there were 185,865 Haitians, and Brazil, where more than 128,000 migrated over an eight-year period, and to the US Mexico border, where today many remain stuck, unable to enter the United States.

“We are still witnessing the aftershocks of the earthquake,” said Guerline Jozef, the co-founder and executive director of the Haitian Bridge Alliance, an organization in San Diego founded in 2016 in the wake of Haitian migration crisis at the southern border. “Thousands of survivors had to leave Haiti in search of a better life, and as a result, many ended up at US-Mexico border. A lot of them lost their lives along the way, as they made the trek from Brazil and Chile across Central America; women were abused because they didn’t have a space to call home, a place they could rebuild their lives after the earthquake.“

On Tuesday, as Haiti marked the 11th anniversary of the earthquake, Jozef and other immigration activists in the US remembered not just the lives lost in the rubble, but those still going through the immigration system, stuck in prison or Mexico, or facing deportation.

In the United States, they include upward of 60,000 recipients of temporary protected status, or TPS, who had become a central target of the Trump administration. Across the country’s southern border with Mexico, an unknown number living in border towns face xenophobia and legal challenges, without access to Haitian-Creole interpreters or understanding of their rights as refugees.

A new report by the Haitian Bridge Alliance, the Center for Gender & Refugee Studies and Mexico’s Instituto para las Mujeres en la Migracion finds that a decade after the Jan. 12, 2010, earthquake, thousands of Haitians not only continue to live in precarious conditions inside Haiti, but also outside the country, where they face anti-Black racism and the threat of deportations just south of the US border.

After making an arduous journey through almost a dozen South America nations, many have been shut out of the US by tightened immigration policy under the Trump administration that has left them unable to present their asylum claims before US immigration courts.

Especially vulnerable, the report points out, are Haitian women who have been subjected to daily indignities in places like Tapachula, a border town on the Mexico-Guatemala border where Haitian migrants wait for their papers to travel elsewhere, including a chance to seek asylum in the US.

Instead of finding a welcoming environment, they have found “intolerance and exclusion,” the report said.

Thirty women were interviewed for the report, in which migrant advocates explain the root causes of Haitian immigration, the journey through countries in the Americas to get to the US, their mistreatment by Mexico’s asylum system, and obstacles they face once at the US’s southern border.

“Many of the women we interviewed shared their stories as it relates to the need for them to leave Haiti, not because they wanted to but because they had to,” Jozef said. “The report reflects the resilience, the strength of the Haitian people through our women.”

The report, its backers hope, will also help guide the incoming US administration as President-elect Joe Biden prepares to take office next week. On the presidential campaign, Biden promised to back immigration reform and to review Trump’s decision to end TPS for Haitians. The report’s authors said they particularly hope to improve understanding of anti-Black racism and other forms of discrimination that Haitians face en route to the US border. They also want changes in immigration policies to allow Haitians to present their cases in the US.

In the wake of its worst disaster, Haiti continues to face unkept promises. Though most of the tent cities that once packed its public squares and streets have since been removed, the country still has not recovered.

According to the latest official count from the United Nation’s International Organisation for Migration, there are still 21 internally displaced camps in Haiti that housed 32,731 individuals.

Though the number reflects a decrease of 98% from the 1.5 million people who were left homeless by the quake, it does not include an estimated 300,000-plus who continue to live in the biggest post-quake informal settlement, Canaan.

In addition to tracking those who remain displaced from the disaster, IOM also tracks Haitian migration. It describes it as one of the most complex and challenging migrations in the region. Haiti’s continued exposure to natural disasters such as earthquakes and hurricanes, socioeconomic issues caused by political turmoil and widespread poverty, continue to be drivers of of irregular migration across the hemisphere, the U.N. organisation contends.

“Eleven years later, things are still in shambles but we cannot forget Haiti,” said Marleine Bastien, a Miami-based activist and founder of the Family Action Network Movement. ‘Sometimes you wonder, what is the role of the government.”

On Tuesday, Bastien dedicated a virtual commemoration not just to those who lost their lives during the 35 seconds of the 2010 earthquake, but to the ongoing fight to get immigration relief for Haitians in the US and those along the southern border in Mexico.

Bastien, like Jozef, hopes that Biden will keep his promises. Among them, a halt on deportation to Haiti during his first 100 days.

Bastien said advocates not only want Biden to rescind Trump’s termination of TPS, which is currently the subject of several federal lawsuits, but to redesignate TPS for Haiti.

“Haiti qualifies right now when you look at the political situation there, the kidnappings, the rape and grave human rights abuses happening right now,” she said. “Eleven years later, Haiti seems to be reeling under both natural disasters and man-made disasters, exacerbated by a failed state that has shown complete disregard for people’s lives and people’s rights. ... It’s like there hasn’t been any progress at all.”

The US Geological Survey said the tremor had a preliminary magnitude of 6.4. Its epicentre was 27.6 kilometers (17 miles) southwest of the town of Porcito and struck at a depth of 14 kilometres (nearly nine miles).

A number of people living near the coast were evacuated as a precaution, there were no reports of casualties.