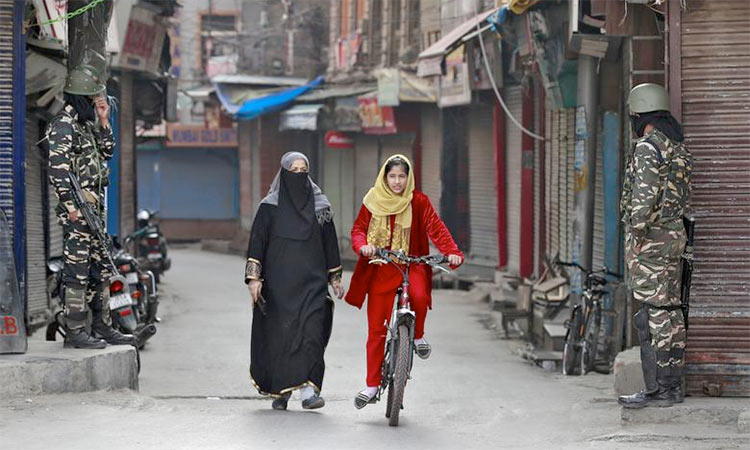 A Kashmir girl rides her bike past Indian security force personnel standing guard in front of closed shops in a street in Srinagar. Reuters

The issues are farm sector reforms, citizenship norms and status of Jammu and Kashmir.

Modi embarked upon legislation on these issues after his Bharatiya Janata Party bettered its position in Parliament in the 2019 elections. The laws relating to Jammu and Kashmir, enacted in August 2019, abolished the special status the state had enjoyed under Article 370 of the Constitution, and bifurcated it into two Union Territories.

Ahead of the changes, army’s strength in the state was raised, leaders of Kashmir’s main parties were detained and the region put under an unprecedented lockdown. The political leaders have since been released. But the clampdown on 3G and 4G communications has not been lifted.  However, techies are reported to have found ways to let people use 4G facility.

Protests in the valley against the laws were subdued. However there were terror cases and exchanges of fire between Indian and Pakistani forces along the line of control (LOC). China refused to recognise Ladakh’s separation from J&K. India ignored its objection as administrative changes are its internal affairs.

China also used the opportunity to make incursions across the line of actual control (LAC).

After some bloody incidents, the border is now quiet but the situation is fraught with the risk of a new status quo along the LAC.

The Citizenship (Amendment) Act (CAA), enacted in December 2019, provides for grant of citizenship to non-Muslim refugees from neighbouring countries. This is the first time India has made religion a criterion in the matter of citizenship.

Home Minister Amit Shah’s announcement that the government will prepare a national register of citizens (NRC) in every state raised widespread concern. In Assam such an exercise had resulted in a large number of people, Hindus and Muslims, being detained in camps as illegal immigrants.  Critics have pointed out that many citizens by birth may not be able to produce documents to establish that their parents were Indian citizens.

Anti-CAA protests erupted all over the country. A street protest at the Delhi suburb of Shaheen Bagh, led by Muslin women, attracted worldwide attention. The coronavirus lockdown put an end to the protests as also preparatory work on NRCs.

When the government begins work on NRCs, protesters are sure to return.

The farm laws were brought in last September even as the pandemic was peaking. The Centre ignored the early protests by farmers, observing coronavirus protocols.

At the end of December an estimated 300,000 farmers from neighbouring states reached the gates of Delhi. More than a month later, they are still there. Eight rounds of talks between representatives of the Centre and farmers’ unions failed to show a way forward.

Farmers’ fear of corporate entry into the agricultural market came true last week when Mukesh Ambani’s Reliance group signed an agreement with a group of rice growers in Karnataka to buy their produce.

During the weekend, the BJP launched campaigns in some states in support of the laws. Farmers saw it as an act of provocation. Their angry response forced the party to abandon a meeting which Haryana’s Chief Minister was to attend. Another meeting of representatives of the Centre and farmers’ unions is scheduled for January 15. But there are indications that the Centre is planning to get the Supreme Court to pull its chestnuts out of the fire.

Some petitions relating to the issue are already under the court’s consideration. They relate to traffic problems caused by street protests, and not the farm laws. The farmers’ union has said the court has no role to play in breaking the deadlock.

The responsibility for the current situation rests with the Modi administration which churned out laws without consultations with the stakeholders. All the laws were rushed through Parliament, dispensing with established procedures like reference to select committees.

The best way the apex court can help to resolve the messy situations created by the controversial laws is to speedily decide the question of their validity, keeping in view its duty to render social, economic and political justice.

The Narendra Modi administration, stuck with legislative measures which it is unable to implement due to popular opposition, has embarked upon a course of action which is turning out to be a remedy worse than the disease.