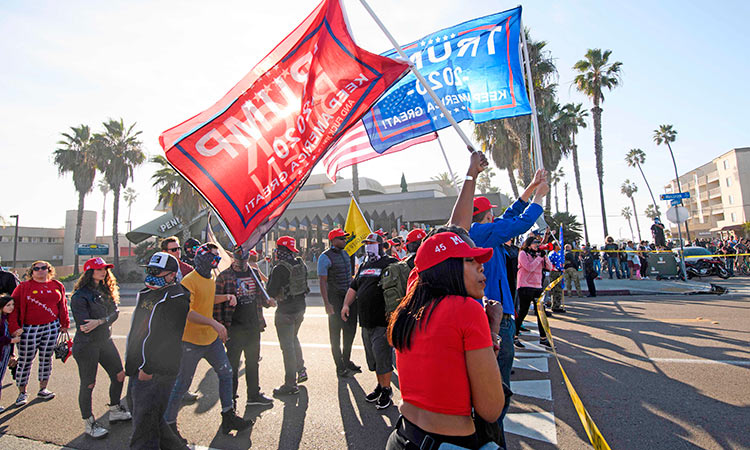 According to the Washington Post, there have been several previous attacks on the Capitol but no invasions. The first was in August 1814 during the War of 1812-15 when the British army occupied Washington and torched both the White House and the Capitol. In 1915, a German-born academic planted dynamite near the reception room in the Senate with the aim of appealing to the US to end World War I. The device exploded at midnight without injuring anyone.

In 1971, dissidents belonging to the Weather Underground set off a bomb in a bathroom serving the Senate, causing extensive damage. In 1983, a group called the Armed Resistance protesting US military intervention in Lebanon and Grenada, entered the building, damaged the door to an office and shredded a portrait of an historic figure. Finally, the Capitol was Al Qaeda’s target on September 11th, 2001, but the hijacked plane set to smash into its dome was diverted to a field in Pennsylvania where it crashed and exploded.

As you can see, with the exception of the British attempt to raze the symbols of US independence, the other attacks were mounted by single or small groups of dissidents rather than a rioting mass. Trump’s storm troopers were determined to take casualties and kill. There were four fatalities in their ranks and one policeman, a Trump voter, died.

Trump is totally to blame for this unprecedented incident. The mob was motivated by Trump’s false claim that the presidential election had been “stolen” as soon as it became clear that he had lost fairly and squarely to Biden. Pro-Trump activists had been openly planning for the assault when they found Trump would not have a second term in office.

Trump prepared the way for the outrage at the Capitol months ahead of the election by claiming postal votes were invalid or fraudulent. As votes were counted and Biden overtook Trump, he began to accuse election officials of corrupting the results. On December 18th, Trump tweeted to his followers: “Big protest in DC on Jan. 6. Be there, will be wild!”

Organisers planned to march on Congress while it met in the Capitol. For right-wing extremists and less radical Trump supporters that date was their last chance to overturn the election and proclaim victory for their deeply flawed and mentally disturbed hero.

They made travel arrangements enabling them to swarm into Washington on the sacred date. They engaged in online fundraising and exchanged information openly on social media on how the day should unfold. Militants obtained flak jackets, handguns and rifles, handcuffs, helmets, long poles to use as spears, and materials for Molotov cocktails.

Their objective was to frighten lawmakers into denying Biden formal confirmation or to take over the legislature by force. Some sought to kidnap members of Congress, others chanted, “Hang Pence,” Vice-President Mike Pence who, as chairman of the joint session of House and Senate, had refused Trump’s demand to deny Biden confirmation.

It is difficult to understand why the Federal Bureau of Investigation (FBI) did not monitior online chat and prepare for what the militants called the “revolution.” By contrast, the FBI is eager to track leftists and Black Lives Matter activists but even after years of “white supremacy” terrorism, the agency refuses to take seriously the threat they pose to the US and its democratic system.

Consequently, Trump and his minions freely incited the mob gathered outside the Capitol on Wednesday morning. He urged the throng to march on the Capitol, a symbol of the republic, said he would walk along with the people who had arrived from across the US, and called them “patriots.” They had every intention of breaching the weak defences of the Capitol and were prepared to do so.

They used staves to smash windows and benches as battering rams to burst doors. Police later found handguns, rifles, and containers of petrol in vehicles belonging to militants from ultra-right groups.

Trump has called for fresh demonstrations on January 17th and radicals have vowed to assemble outside the Capitol during Biden’s inauguration on the 20th. It remains to be seen if the Capitol police, the federal police, the FBI, and the National Guard will prepare properly for rioting if pro-Trump crowds assemble. Law enforcement officers are very often Trump supporters.

Democrats and a few brave Republicans have called for Trump to be removed. They can effect removal in two ways. According to the 25th amendment to the US Constitution, Pence can call on the cabinet to remove a president who is unfit to carry out the duties of his office. So far, Pence has refused and two cabinet members have resigned, complicating this option.

The other option is impeachment. Articles of impeachment will today be submitted to the House of Representatives which is expected to approve but once the case is submitted to the Senate there will have to be debate which will continue beyond Biden’s inauguration. The Democrats will then have a majority of one — with the vote of Vice President Kamala Harris. To convict Trump, the Democrats will have to secure the support of six Republican senators. At present, three could vote in favour but others may take courage and vote to convict Trump. This would have major repercussions for him and for his party. He would be barred from standing for president again in 2024. This would be a major boon for Republicans who want to run at that time. Trump would be the first president to be impeached twice and the first to be convicted. He would lose perks and privileges of an ex-president.

President-elect Biden opposes both options. Embarking on Trump’s removal only days before he must leave office will allow him to command the spotlight beyond his departure. This would deflect attention from the new administration as it launches its “First 100 Days” with programmes to combat COVID with vaccinations, provide urgent financial relief to out-of-work citizens and faltering firms, relaunch the economy, and re-enter international agreements from which isolationist Trump withdrew.

If Biden’s presidency is to succeed during his first two years in power he must get COVID under control, provide essential aid to families and firms, save old jobs and create new ones, and rescue the economy. During this time, he will have the support of both houses of Congress where his Democratic party has slim majorities. In 2022, the Democrats will face new elections for the entire House of Representatives and one-third of the Senate. If Biden delivers on his promises, his party could increase its seats in both branches of the legislature. If he fails, the Republicans could win majorities in one or both and Biden will almost certainly be blocked from carrying out his agenda — as was former President Barack Obama during the last two years of his first term and entirely his second term.