A ‘Capitol’ breach of democracy. What follows next? - GulfToday 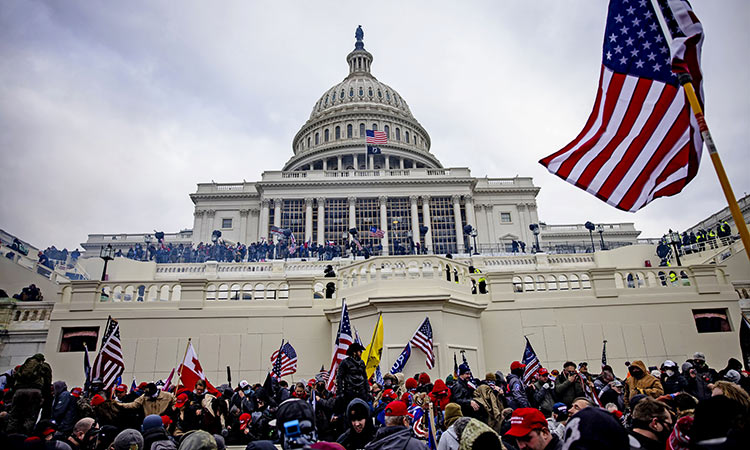 Pro-Trump supporters storm the US Capitol following a rally with President Donald Trump in Washington, DC on Wednesday. Agence France-Presse

It took 159 years, but the Confederate battle flag finally flew in the United States Capitol on Wednesday night as a mob of men and women marching behind it smashed through windows, assaulted police officers, and terrorised members of Congress in hopes of preventing the House and Senate from certifying Joe Biden’s election as the 46th President of the United States.

Not since Major General Robert Ross led the British Army’s burning of what was then known as Washington City has a force hostile to the very idea of American democracy darkened the corridors of the country’s legislature. Yet this invasion came not at the hands of foreign soldiers sworn to obey George III, but of Americans bent on sedition, on the orders of President Donald Trump.

Rioters bearing flags ranging from the Confederacy’s “stars and bars” to those emblazoned with the president’s name drove lawmakers from their chambers just as they were beginning debate on Republican objections to the counting of Arizona’s electoral votes. They did so just minutes after Trump, speaking at a “stop the steal” rally at the other end of Pennsylvania Avenue, exhorted crowds of his followers to intervene.

By the time law enforcement and national guardsmen from the District of Columbia, Maryland, and Virginia had joined the Capitol’s own police force and the FBI in retaking control of the building, one person was dead, more than 15 were under arrest, and numerous Capitol police officers had suffered injuries. And even though the House and Senate both announced plans to resume the vote-counting, national security experts who study authoritarianism and radicalization fear that President Trump’s refusal to admit his defeat will plant seeds for yet more violence long after he is gone.

This was just the sort of nightmare scene former Republican Representative Denver Riggleman had tried warning his former colleagues about in his final speech from the House floor last month.

An ex-Air Force intelligence officer, Riggleman had urged his colleagues — and all Americans — “to recognise that many bad actors who spread spurious and fantastical conspiracy theories under banners like QAnon, Kraken, ‘Stop the Steal,’ ‘Scamdemic’ and many other emotive terms and coded language are not disseminating information rooted in knowledge but with questionable motives and greed.”

In a phone interview Wednesday evening, Riggleman said the riot was a predictable outcome of the embrace of conspiracy theories such as QAnon by Trump and many of his advisers.

“When you put radical, radical ideas together with messianic belief systems, that is a recipe for disaster,” he explained.  “We are lucky things didn’t burn this time.”

Riggleman said both President Trump — whose advisers were reportedly in contact with people connected to Wednesday’s riot — and GOP members who embraced his baseless claim that Biden’s victory stems from a “stolen election” share responsibility for the violence.

Another former intelligence operative, ex-CIA officer Patrick Skinner, also said the federal government needs to give itself the tools to crack down on a radicalization process that isn’t dissimilar from that used by the leaders of Islamist terrorist groups he once worked to disrupt.

But unlike those foreign enemies, he said much of the radicalization process that is leading to violence at home is easy to see and is led by top government officials.

“Before, 9/11 chatter was through the roof, but now we know exactly what the chatter is about… and the chatter is coming from inside the White House,” said Skinner, who now works as a police detective in his Georgia hometown.

Because Trump and his allies have spent years propagandizing his supporters to believe that Democrats holding power would result in the destruction of the country, the former CIA operative offered a rather pessimistic assessment of the future if the US doesn’t act as aggressively to counter right-wing extremism as it did with Islamist extremism.

“The best-case scenario right now is we have some long-gun, terrible shootings, or a couple small bombings… preceding or after an inauguration that half the country says is a theft,” he said.  “When the president of the United States says clearly that ‘they are trying to steal it’ and ‘we must fight for our freedom,’ people usually join the military for that sort of cause.”

“We’re not even just talking about our mentally unstable people. We’re talking about… what we used to call regular people,” Skinner continued. “But now they are certainly unstable. And they’re being incited by the president of the United States and United States senators, some of whom are not dumb and know exactly what they’re doing.”

As if to validate Skinner’s sentiments, the president himself ignored calls to denounce his followers’ actions, instead taking to Twitter to reiterate false claims about the election and encourage supporters to “remember this day” going forward.

“These are the things and events that happen when a sacred landslide election victory is so unceremoniously and viciously stripped away from great patriots who have been badly and unfairly treated for so long,” he tweeted. “Go home with love and in peace. Remember this day forever!”

Though Twitter management has long given him a free hand to violate the site’s rules because his public statements are deemed newsworthy as president, this post-riot missive may have crossed a line. The company took down the tweet and announced that Trump’s personal Twitter account would be locked for twelve hours.

Colin Clarke, a senior research fellow at The Soufan Center and a former analyst for the International Security Assistance Force in Afghanistan, said he fears that Trump is “laying the groundwork” for violence directed against a government he no longer leads to be “the new normal.”

And with just two weeks remaining until Biden is sworn in as Trump’s successor, Clarke warned that the country faces “another inflection point” on Inauguration Day because Trump has consistently told his followers that various far-fetched solutions would be deployed to validate his claims about the election and secure him a second term in office.

“When Joe Biden is installed as the president, the jig is up because he’s going to have to physically leave the White House,” he said. “And they’re going to realize that all of the smoke and mirrors he’s been basically attempting to deceive people with over these past couple of months [were] all a hoax.”