Iran builds up pressure on Biden over nuclear deal - GulfToday

Iran builds up pressure on Biden over nuclear deal 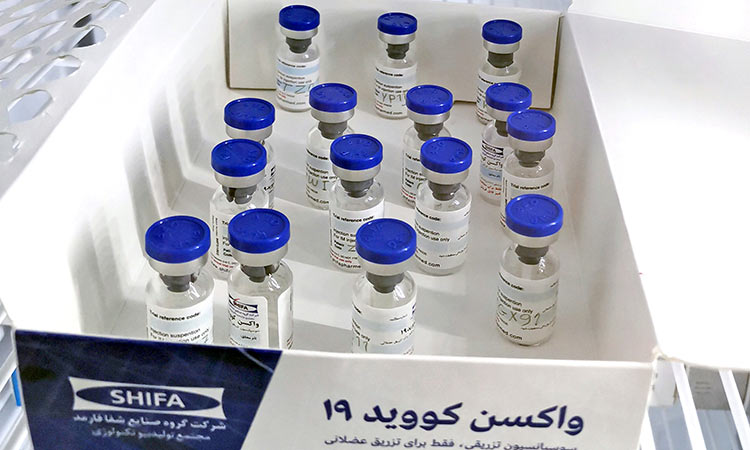 Tehran has launched a first stage of trials of its own COVID vaccine in a bid to become self-sufficient in the battle against the virus which has infected 1.25 million and killed 55,000, making Iran the most contagious country in the region. The opening of the initial trial of a home-made vaccine coincided with US approval of the transfer of 200 million euros to purchase vaccines from abroad and a donation by anonmyous US citizens of 150,000 doses of the BioNtech vaccine, produced in Germany in collaboration with the US Pfizer firm. These welcome developments took place as the daily fatality rate in Iran fell to a three-month low due to strict lockdown and curfew.

The ongoing trial involves 56 volunteers who are set to receive two doses two weeks apart so scientists can test whether the vaccine is effective and safe before shifting to a wider sample. The vaccine is based on the traditional model of a weakened virus which is meant to trigger a person’s immune system to defeat infection. While this is the first local vaccine to reach human testing, at least eight Iranian firms and universities are working on vaccines to protect the country’s 80 million people. Unless Tehran is successful in vaccinating 75-80 per cent of its population, Iran will remain a major source of contagion in the Gulf, the entire region, and neighbouring countries. Aware that this is a serious global threat, Iran has been receiving scientific aid from either China or Russia, which have developed their own vaccines.

Iran is set to pay $244 million for imports of 16.8 million doses of vaccines from COVAX, the organisation established by the World Health Organisation, France and the European Union with the objective of ensuring reasonably fair distribution of vaccines to 184 signatories, including low-income countries which cannot finance supplies. The US, under the isolationist Trump administration, did not join COVAX. This may change with the advent of incoming President Joe Biden on January 20th.

Iran has suffered from increasing degrees of sanctions since the US first imposed sanctions in November 1979 in response to the seizure of the US embassy in Tehran after Washington permitted the shah, the ex-ruler of Iran, to enter the US for medical treatment. The most punitive rounds of sanctions have been added by Donald Trump after he withdrew in May 2018 from the 2015 agreement for dismantling 90 per cent of Iran’s nuclear programme in exchange for lifting international sanctions.

Iran has responded to the challenges posed by Trump by enriching uranium to 4.5 per cent from the 3.67 per cent specified by the deal, building up its stockpile of enriched uranium beyond limits, and employing more advanced centrifuges to enrich uranium than allowed. To ratchet up pressure on Biden to make good on his pledge to promptly return to the nuclear agreement, Iran has told the International Atomic Energy Agency, which monitors compliance with the deal, that it plans to restart enrichment to 20 per cent, considered a major step towards the 90 per cent level needed to build weapons which Iran says it does not want. Tehran and Libya both ended covert efforts to build nuclear weapons in 2003 — after the US war on Iraq.

While Iran has not given a time frame for its latest move, Biden clearly has to act quickly and decisively by returning to US compliance and lifting sanctions imposed by Trump in violation of the deal. Since the US was first to breach it, Iranian President Hassan Rouhani has made it clear that once Biden re-enters the deal, Iran will reciprocate by reversing its own violations. This can be achieved in a matter of weeks by exporting most of the accumulated enriched uranium and ware-housing advanced centrifuges.

Tehran’s decision to increase enrichment to the 20 per cent level coincides with Trump administration attempts to heighten tensions with Iran ahead of yesterday’s one year anniversary of the US assassination of Iranian Quds Force Commander Qassem Soleimani and nine others near Baghdad’s international airport. While promsing retribution “at the appropriate time,” Iran has refrained from mounting retaliatory attacks on US troops in Iraq and ordered pro-Iranian Iraqi Shia militias and Lebanon’s Hizbollah to hold their fire.

While the Pentagon has so far shown restraint, the erratic Trump remains commander-in-chief and cannot be trusted. Iran’s Foreign Minister Mohammad Javad Zarif has warned that Trump may mount an attack on Iran before leaving the White House. He may want to go out with a grand display of pyrotechnics or have the desperate illusion that starting a war might enable him to stay in office. Who knows?

Meanwhile, local firms have been producing goods that Iran had imported. According to Iran’s central bank governor the country’s economy grew 1.3 per cent between March and mid-September last year due to increases in local manufacturing. However, it is not clear whether this growth is an increase from the low level to which the economy has fallen over the past two years or from the level it reached before Trump reinstated and ramped up sanctions. Iran’s non-oil gross revenues have soared 83 per cent over recent years while the oil sector has shrunk due to sanctions which limit exports.

The Wall Street Journal reports that 1,000 small and medium-size companies are “driving the growth of Iranian manufacturing (and have) created or reinstated 17,000 jobs,” decreasing unemployment. Furthermore, The WSJ writes that recently “Iran has gotten better at evading US sanctions on its crude oil exports” by offering discounts to those prepared to get round them. Asian countries, including China, have been buying increasing amounts of Iranian crude.

If Biden does not move expeditiously European countries opposed to Trump’s sanctions — particularly Britain, France and Germany which are signatories of the nuclear deal — could seriously, at long last, challenge the sanctions regime. This does not mean, however, there will be a rush by European governments and firms to invest in Iran similar to the scenario after sanctions were lifted in January 2016. Iran will have to provide attractive opportunities for external investment. Iran’s clerics, government, and parliament have to cut bureaucratic red tape and regulations before there will be large-scale foreign investment in the deteriorating oil sector and other large manufacturing industries which have suffered greatly from sanctions. Iran will also have to deal with the monopolies established by wealthy charitable foundations (bonyads) controlled by the clerics and key industries in the portfolios of the military — both of which dominate the economy.