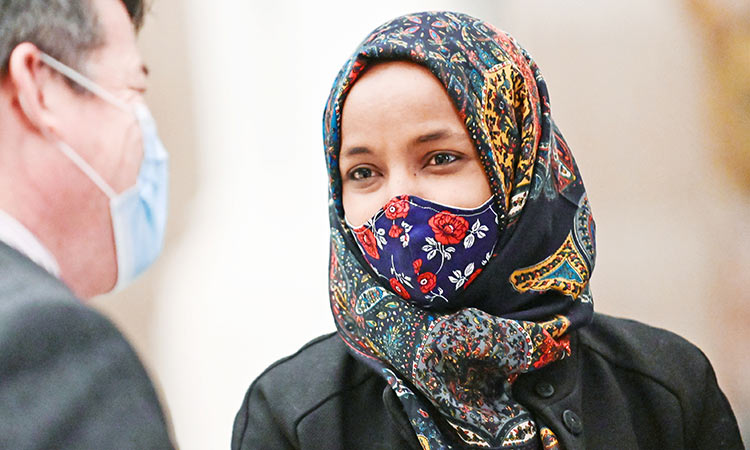 US Representative Ilhan Omar speaks to her colleague in the US Capitol in Washington. Reuters

President-elect Joe Biden was not US representative Ilhan Omar’s first choice to lead her party, but she has a few requests for him now that he is.

Cancel tens of thousands of dollars in federal college debt per student. Pay all federal contractors a $15 minimum wage. Declare climate change a national emergency, among other things, and do it all in his first 100 days in office through executive orders.

The wish list, rolled out in a petition last week, is the latest in a public push from the Minneapolis Democrat and progressive allies in Congress to steer the new administration toward policies and appointees favoured by their movement.

“President-elect Biden ran on putting together the most progressive administration in American history. He has a real opportunity to keep that promise,” Omar, preparing to embark on her second term representing Minnesota’s Fifth District, said in an interview.

The idea of collaborating with the White House is a new one for Omar, whose high profile and aggressive social media strategy put her at the heart of political conflict in Washington the past two years. A frequent target of attacks by President Donald Trump, Omar is now sizing up a new president who shares a party label but not her vision for radical political change.

Omar says she wants to shift her approach after a first term packed with controversy and online skirmishes with Trump. Having endorsed Sen. Bernie Sanders in the Democratic presidential contest, she says she’ll continue her public campaign for progressive positions but also wants to work privately with Biden and others to find compromise on issues that have languished under Trump.

“We’ve done a lot of stuff publicly and a lot privately on our relationship as we move forward with an administration that is of our own party,” Omar said. “That is going to be very different, and our strategy as the progressive wing will be very different.”

Biden’s rise to the nomination was the culmination of years of tension between moderates and more liberal factions of the Democratic Party. But Omar, a loud and early backer of Sanders, said she’s been pleased so far with how the Biden transition team has engaged progressives.

Last month, Omar and New York Rep. Alexandria Ocasio-Cortez, both members of a group of four progressive women of colour in the House Democratic Caucus that dubs itself “the Squad,” led a petition to freeze out former Biden chief of staff Bruce Reed from an appointment to the Office of Management and Budget. They called Reed a “deficit hawk” who presided over cuts to Medicare and Social Security in the Obama administration.

Biden ultimately went with a different pick for the role: Neera Tanden, head of the Center for American Progress and a woman of colour.

Attorney General Keith Ellison, who held the seat before Omar, served his first term in Congress during the administration of Republican President George W. Bush; Democrat Barack Obama was elected two years later. But Ellison said he never stopped pushing the White House on his agenda.

Every time he saw Obama in person, Ellison said, he handed him a letter urging him to support a $15 minimum wage for federal contractors.

“Having an administration of the same party has its own challenges and you’ve got to continue to advocate,” Ellison said. “Not because Biden doesn’t want to help, but because Biden has so many competing things, so many others are asking for things, that they might be inclined to help you but you are just way down the list.”

The 2020 election left Biden and Democrats working with a smaller majority in the House, and Republicans may still hold the Senate pending two runoff elections in Georgia. Whatever the outcome, Biden will have little margin for error if he pushes for a progressive-leaning Cabinet. And even if he leans on executive orders to enact policy, as Omar is urging, court challenges could get in the way.

“There’s not a lot of room for Democratic leaders to manoeuvre,” said University of Minnesota political science professor Kathryn Pearson. “I expect [Omar] to use her platform, but to the extent to which it’s successful when it comes to votes, that remains to be seen. There’s going to be a lot of coalition-building that needs to happen.”

Biden won the White House thanks in no small part to huge turnout in urban cores like Omar’s district, which picked him over Trump with 80% of the vote. But not all of those voters went down their ballot and filled in the circle for Omar, who beat a Republican opponent in the DFL stronghold by 64% of the vote.

Dean Kallenbach, a longtime Minneapolis resident who now lives in Golden Valley, voted for Biden in November but not Omar. He had supported Antone Melton-Meaux in the August DFL primary, a challenger who positioned himself as a centrist alternative to Omar, who won the primary with 58% of the vote.

Kallenbach said he was frustrated with what he saw as a lot of noise but no results for the district after Omar’s first term. He said he was irked by her self-inflicted wounds, including comments about the political influence of Israel, for which she apologized to the Jewish community.

In D.C., Omar said it’s hard to understate how dramatically her circumstances have shifted. Trump frequently sparred with Omar on Twitter during her first two years; in the final weeks of the campaign, he mentioned her critically so many times in his rallies that she felt like he was running against her instead of Biden.

“It doesn’t even really register yet,” said Omar on Trump’s loss. “I know so many people are walking around with anxiety still and he’s still doing his shenanigans. But I know his time is coming to an end.”

Omar recognizes that the “rules of engagement will be very different” with a Biden White House. She promised a different approach to how she uses social media platforms, which have allowed her to communicate directly with supporters but have also been the venue for some of her most criticized remarks.

On her campaign website she is selling buttons that say, “Black Women Refuse To Be Muzzled,” and shirts that say, “F--- around and find out.”

But Omar has largely refrained from criticizing the incoming president and his team. She recently tweeted praise for Biden’s pick for secretary of Health and Human Services, California Attorney General Xavier Becerra.

“I don’t think the evolution of Ilhan Omar and what kind of politician she wants to be is done yet,” said Todd Rapp, a DFL political consultant and strategist. “There’s no playbook on how to be a member of Congress who represents a very safe seat."