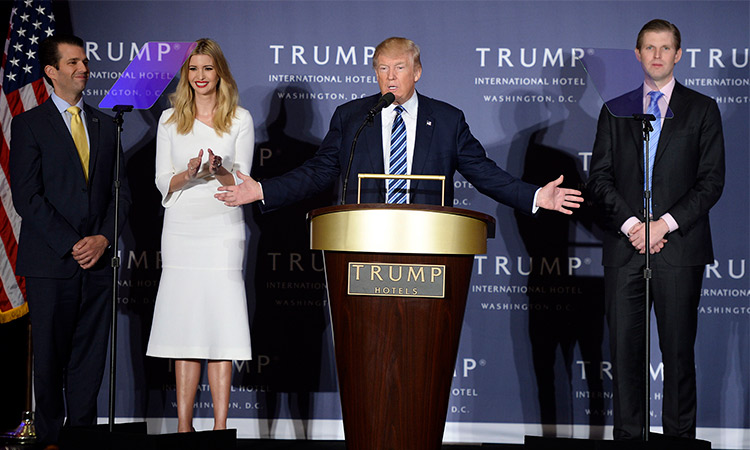 Donald Trump speaks to a gathering in Washington. File/Reuters

Instead of preparing to leave the White House with grace and dignity, Donald Trump is determined to wreak revenge against fellow citizens for his loss of a second term in office. Whether Republicans, Democrats or independents they will continue to suffer from his unscientific, erratic, and dangerous mishandling of the coronavirus. More than 3,000 are dying daily from the virus, making it the leading cause of death in the US, thanks to his refusal to tackle COVID-19 as soon as it arrived on US shores, denial of the threat it poses, failure to provide mass testing, and rejection lockdown, masking, social distancing and handwashing as means to avoid infection. Having promoted the development of vaccines, Trump is currently sowing distrust of vaccination. If too few take the vaccine, many more will die. Instead of treating the virus as a public health issue, Trump has politicised it in order to divide the country between Trumpites and opponents.

Dealing in death seems to be his choice in fields other than COVID. Trump has not pressed loyalist Congressional Republicans to agree to a comprehensive relief package to rescue ravaged businesses from ruin and unemployed citizens from homelessness and hunger. Without a financial boost many homeless people could succumb to cold, COVID and other diseases.

Dissatisfied with the 125 deregulation measures he adopted during his nearly four years in the White House, Trump is now ditching additional regulations which could take lives. Writing in the Washington Post, Catherine Rampel points out that he has issued a decision to permit farmers to use a pesticide which causes brain damage in children. Under Trump appointees, the Environmental Protection Agency (EPA) has reversed scores of measures meant to curb pollution. The latest EPA disaster is to ease curbs on soot, which is “linked with asthma, heart attacks and other illnesses, including COVID-19” and largely affects low-income and minority communities. Rampel says that last year the EPA reported scientific evidence that “modestly tightening the standards could save thousands or even tens of thousands of lives per year.” Furthermore, the EPA has finalised a rule to make it more difficult to “issue new clean-air standards in the future,” with the aim of tying the hands of the incoming Biden administration which has pledged to give priority to cutting emissions that cause climate change.

Other Trump measures she lists would lead to the expiry of medical care unless reviewed by health officials, creating red tape and delays. He is also determined to tighten eligibility for food stamps “in the midst of a hunger crisis” and to limit admission to federally funded homeless at a time landlords are evicting tenants who cannot pay rents.

As his days in the White House waned, Trump has dealt directly in death. He ordered five federal executions of four black men and one white woman, breaking a 130-year old precedent of suspending executions during a presidential transition. The first to die was 40-year old Brandon Bernard, a convicted killer who spent 20 years on death row and the second was 46-year old Alfred Bourgeois, a mentally retarded man. Before losing the election, Trump had ordered the execution of nine, including four white men.

Since the federal death penalty was reinstated in 1988, only three executions were carried out during the administration of George W. Bush. Since 2003, there have been none on the federal level while states have executed only 22. Trump’s attorney general William Barr announced in July 2019 that executions would resume. Although 60 per cent of US citizens oppose the death penalty and favour life imprisonment Trump sought to boost his image as a “law-and-order president,” thereby making executions a political tool at a time the US was in the grip of a murderous pandemic which has been infecting thousands of prison inmates.

An initial proponent of the death penalty, Biden shifted to opposition as those executed are disproportionately black. He has said he would revoke federal capital punishment.

Trump should be held accountable for his refusal to tackle the pandemic and provide for US citizens who have died and are dying in ever greater numbers. His behaviour amounts to criminal or gross negligence. Negligence is defined in law as failing to recognise a “substantial and unjustifiable risk of causing death.” Criminal negligence stems from “extremely unreasonable” actions.

Therefore, if Trump were to be charged, it would be necessary to show that his mismanagement of COVID-19 has been both extreme and unreasonable. He has delayed and undermined the US response to COVID, lied about the threat it poses to life and limb, undermined public trust in precautionary measures, and is currently promulgating doubts about the efficacy of vaccines which could halt the spread of the virus.

Writing in The Atlantic on November 20th, James Fallows makes the case for charging Trump.

After giving a number of examples of criminal negligence, Fallows writes that the administration has been “looking the other way, leaving states and cities and hospitals and families to their own resources — even as… those hospitals, and then the mortuaries, fill up, and medical workers serve endless shifts, knowing that they may be next to succumb. And all of this with the pandemic taking a cruel and disproportionate toll on racial minorities, and on families that are already under pressure from an unequal economy.”

Fallows argues that a “normal” leader would act urgently on the international front to prevent entry into his country of the virus and on the domestic front to implement measures recommended by qualified scientists: masking, social distancing, hand washing and self-isolating when symptoms appear. Fallows points out that Trump has compounded his dangerous behaviour by refusing to acknowledge his defeat in the presidential election and denying the incoming team of President-elect Joe Biden access to information and personnel to provide for a smooth transition. Delay could cause fresh infections and fatalities and make it more difficult for Biden to, at long last, confront and, hopefully, contain coronavirus.

Fallows concludes by drawing a parallel between Trump’s behaviour during the pandemic with the suffocation by a Minneapolis police officer who “kept his knee on the neck of the prone George Floyd (while he) pleaded, and struggled, and choked, and died.” While the courts have still to determine how to charge the officer, the video of the incident makes it clear that it could, at least, be judged manslaughter or second degree murder.

Fallows is not alone in making a case for the prosecution of Trump for a large proportion of the almost 290,000 deaths and the more than 15 million cases from coronavirus since it appeared in the US. He can, of course, plead presidential immunity but he will be forever blamed by the families of people who died and suffered from a virus he simply refused to tackle. If he had, he would have been acclaimed a hero and almost certainly won the election he lost, largely, due to COVID.