Lines between deceit and ignorance are blurred - GulfToday 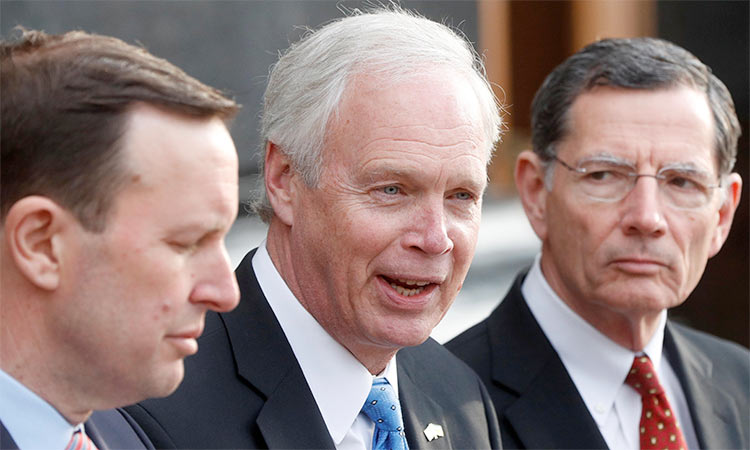 Senator Ron Johnson of Wisconsin just became the latest prominent Republican elected official to try to undermine democracy. Attorney General Bill Barr acknowledged yesterday that, despite President Donald Trump’s insistence, there was no evidence of voter fraud in the 2020 election, and Trump had in fact lost to Democratic President-elect Joe Biden. Johnson didn’t like that, though, and he went on the attack, insisting that the AG must “show everybody” his evidence that there was no mass fraud because in his view, “there’s enough suspicions” to raise questions about the election.

Of course, you can’t prove a negative; it’s up to Trump and his sycophants to provide evidence of fraud, not up to Barr, or anyone, to provide evidence that nothing happened. But Johnson’s ridiculous demands and confused outrage raise another question: Is he just a fool? Or is he deliberately lying and trying to cast doubt on the election, knowing full well that there is no fraud? Are the claims of fraud the result of calculated deceit, or are they the result of stunning ignorance and thick-headedness? Considering that Mark Becker, the former head of the Brown County Republican Party, says Johnson told him in a private phone call that he knows Biden really did win the election, these questions couldn’t be more pertinent.

There’s no doubt that Trump encourages a culture of corruption and deceit. He lies constantly, and often about trivial things, like his father’s birthplace, or whether he mispronounced a name. He just pardoned his former National Security Advisor Michael Flynn, who pleaded guilty to lying to the FBI — a clear sign that the president thinks his staff lying to authorities and the public is acceptable. A brewing scandal in which the Justice Department is investigating unnamed parties for trying to bribe Trump for pardons shows the extent to which people close to Trump assume he is corrupt and willing to deceive the public.

Based on this record of mendacity, you could easily conclude that Trump knows election fraud claims are baseless, but is pushing them anyway. In the same vein, officials have been quoted as saying, “What is the downside for humouring him for this little bit of time?” Trump is powerful, and can still harm GOP politicians if he wants to. So perhaps Ron Johnson and others are just pushing claims of election fraud to keep Trump happy. They know he’s lying — and even he knows he’s lying — but they all see an advantage in spreading false claims about the election.

It’s also possible, though, that Johnson really has convinced himself that there was fraud, and that Biden cheated. There’s little doubt that many of Trump’s voters believe him when he says that there was election tampering; one post-election poll found that 70 per cent of Republicans did not think the election was free and fair. Republican lawyer Lin Wood is so certain that there was fraud in Georgia that he’s encouraged Republicans to withhold their votes in the upcoming Senate special elections in order to force GOP officials to overset the results in Trump’s favour. That kind of talk — and the fear that GOP voters may believe voting is useless after all this talk of fraud — may be why AG Barr has come out to say that the election was fair. And Ron Johnson may be opposing him because, like Wood, he really believes, with no evidence, that there was fraud.

It’s an interesting academic exercise to try to figure out whether Republicans believe their own nonsense. But it’s impossible to know for sure, because the GOP has worked hard — even before the Trump era — at severing itself from truth. The constant flow of conspiracy theories from Fox News and other outlets — about death panels, Benghazi, birtherism, and more — depend on an audience which is both credulous and more or less consciously willing to sign onto nonsense for partisan gain.

Following philosopher Harry G. Frankfurt’s formulation, we might say that Republican politics is steeped in “bull***t.” “Bull***t”, for Frankfurt, isn’t the same as lies. Rather, bull***t is characterised by an indifference to whether something is true or false. When Ron Johnson says there’s been a lot of suspicion of fraud, he doesn’t believe Biden cheated. He doesn’t not believe Biden cheated. He doesn’t really care what the truth is, one way or the other. He cares about pushing partisan talking points and stoking anger, confusion and resentment.  Whether the talking points are true or false is irrelevant.

If Johnson is a fool, he’s a fool deliberately. If he’s lying, he’s lying with the enthusiasm of the naïve. The scary thing about the GOP today is not the deceit or the ignorance. It’s the fact that they’ve deliberately erased the distinction between the two. Trump, and Johnson, and Lin Wood, and even Republican voters don’t know or care if what they say is true. The election is illegitimate because they don’t like the outcome; that’s as near to truth as they care to get. They revel in resentment and bull***t. For them, nothing else is real.

The House impeached President Donald Trump for abuse of power and obstruction of Congress. Specifically, he is accused of withholding military aid from Ukraine in an effort to force Ukrainian President Zelensky to announce that his country was investigating former Vice President Joe Biden’s son, Hunter, for corruption. Trump, of course, denies these allegations. These are the things we know for certain so far.

Many accounts of Trump’s actions discuss the fact that he is using the government to advance his own ends. Other commentators have focused on the damage Trump has done to our foreign policy by marginalizing career diplomats and allegedly using foreign aid as a tool for blackmail.

These are serious issues. But they shouldn’t obscure the main reason impeachment was necessary. In my view, Trump is trying to steal the 2020 election.

Biden is the leading contender for the Democratic presidential nomination, and may well face Trump in the election in the fall. Trump’s alleged actions in Ukraine were, we can surmise, supposed to smear Biden by creating headlines around already debunked accusations.

Trump knows that this kind of media manipulation and disinformation can be effective because it worked in 2016. In that election, Russian intelligence agencies hacked and leaked Democratic National Committee emails, creating a huge media smoke-storm around candidate Hillary Clinton, even though there was no actual wrongdoing. Given how close the 2016 election was, it’s possible that Russian interference helped swing the election to Trump. By the same token, a well-timed announcement of a Ukrainian investigation into Biden could affect the 2020 results.