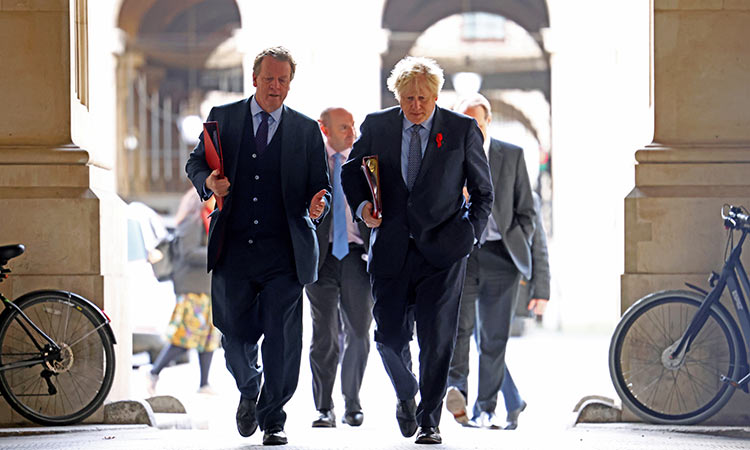 Boris Johnson and Alister Jack leave after a Cabinet meeting at the Foreign and Commonwealth Office (FCO) in London, Britain, on Tuesday. Reuters


While the UK and EU negotiators move slowly (or not) to a post-Brexit trade agreement, the government has this week set out a future for one of the sectors which is likely to be most affected: agriculture. The message is: Nature First!

Instead of paying farmers to produce more food or merely to sit on large acreages of land, they are to be encouraged to recreate the ecologically diverse countryside and environmentally sustainable agriculture which, it is believed, existed generations ago. The minister’s killer argument, defending the new policy, was that his grandfather farmed this way, with crop rotation rather than fertilisers to protect the soil; so why can’t today’s farmers?

Few would question the ideal. Saving the planet is a political mantra from which only a few perverse individuals would dissent. The millions who tune in to Countryfile early on a Sunday evening are normally served up a treat of sumptuous landscapes and committed, sensitive and thoughtful farmers trying to deliver this outcome, while earning a living and keeping us fed. We are all environmentalists now.

The problem is that farming at scale is rather less rosy in reality than in those polished Countryfile stories. In some cases, yesterday’s environmentally damaging activity is simply replaced with a new, different, damaging activity. I have spent a sizable part of the pandemic year on my wife’s small farm in a particularly beautiful part of England, in a National Park. There are no longer any cattle, which will be pleasing to vegans, and even to those like me who have cut out red meat. However, the new cash crop is horsey-culture, which is notoriously bad for the land.

To outward appearances, nature is flourishing. We can look out of the window to see a pair of goldfinches or a buzzard circling its territory; the deer who treat the fences as a minor inconvenience; and the holes in nearby woodland which betray the nocturnal life of badgers and foxes. In the summer there were bees and butterflies seemingly in profusion.

But the numbers tell a less happy story. Last year, data on nearly 700 species of all kinds, from birds to sea animals, showed 41 per cent have seen populations decline since 1970, while 26 per cent have increased. Butterfly numbers have fallen by 17 per cent on average and moths by 25 per cent. Since food chains are interconnected, the loss of one species can rapidly mean the loss of another.

Some idealistic landowners have resorted to “wilding” to halt this process and there are some success stories. A few have managed to make the enterprise profitable by enticing urban tourists on a weekend safari: “We may not have elephants and lions but marvel at the beetles and birds.” Nice for some; but not exactly an industry. To understand the future of the countryside, we have to appreciate its economics. Soils and terrain vary greatly. Arable farming is very different from crop to crop and even more different from livestock farming; sheep are then very different from cattle; and dairy cattle are very different from beef; let alone horticulture, poultry and bee-keeping. Each requires different expertise but the basic drivers are the same. It is all about price: how to keep prices low enough for consumers and high enough to reward producers on the farm. The reason why we once had more hedgerows and wild meadows was not out of concern for the welfare of hedgehogs or nesting thrushes but because prevailing prices made commercial cultivation of these spaces unattractive. Much Brexit nostalgia – which suggests we can “make our countryside great again” – is based on a past which never existed.

Apart from the war-time years, when our preoccupation was understandably with self-sufficiency, Britain depended on cheap imported food from the Empire (or Argentina for beef and the US for grain). The key historical event was Sir Robert Peel’s abolition of the Corn Laws, removing tariffs on imported goods and in so doing facing down the vested interests of British landowners to meet the demands of the urban working class.

When we joined the Common Market, the big downside to an otherwise positive venture was reduced access to cheap imported food from around the world and subordination to the protectionist Common Agricultural Policy (CAP). There was a preoccupation with European self-sufficiency and profitable farming underpinned by artificially high support prices leading to excess production, intensive farming and disappearing hedgerows.

The various reforms of the CAP, won by the UK in the teeth of opposition from France, got us to a position of greater economic sanity. Although the formula was still crude and inefficient – based on acreage alone – production was no longer subsidised and farmers began to be rewarded for environmental stewardship. As we abandon that set of incentives (however imperfect), leaving Europe won’t change the basic economic trade-offs. If farmers are to be rewarded for producing less, more sustainably, they will have to be subsidised out of an already horribly unbalanced budget or enabled to charge higher prices for what they do produce. But the government has said subsidies will be phased out and also reassured farmers that they will not be abandoned. Yet they cannot realistically advocate higher food prices for a population already struggling with more than a decade of declining living standards, with the prospect of further dirge to come from Covid and Brexit.

Ministers hoped to square this circle by a clever wheeze, rediscovering the spirit of Peel, in the form of trade agreements to secure cheap food from the US (and the Commonwealth). The problem with this solution is that the free trade agreements required to achieve it, especially for the US, now look a long way off. Biden has little motivation to pursue such an agreement. And there is a growing lobby in the UK warning that cheaper American imports of grain, red and white meat would be at the expense of inferior food quality and environmentally lower standards of production. What would be the point of greening East Anglia while de-greening Iowa, all while adding to the air and sea miles of our food supply?

On agriculture as on so much else, Boris Johnson has assumed that Brexit is a costless adventure or that someone else will pay. The enterprise will be decorated by greenery and dressed up in the notion that the British countryside can be painlessly “returned”, without cost, to its pristine state. But someone will have to foot the bill, be it taxpayers required to fund yet more subsidies; consumers in the form of higher prices or inferior quality, or both; or farmers themselves as cheap imports eclipse their livelihoods.

That is the economic reality we have to face, if we really are to put nature first.