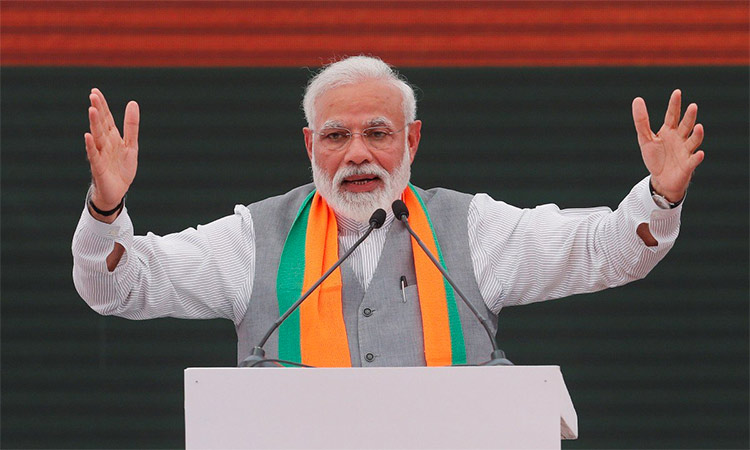 Two months later it is caught in an unprecedented face-off with farmers from Punjab and Haryana who reached the national capital, fighting off police attempts to stop them at various points along the highway.

They have accused the government of disrupting the established markets to facilitate the entry of the corporate sector into agriculture.

One of the new laws purportedly aims at promoting and facilitating trade and commerce in farm produce.

It expands the scope of trade in farm produce beyond traditional marketplaces to “any place of production, collection, and aggregation”. It also permits electronic trading and e-commerce of scheduled farm produce.

Another law ostensibly seeks to empower and protect farmers by providing a legal framework for them to enter into pre-arranged contracts with buyers, mentioning prices.  It also provides for a dispute resolution mechanism.

The government claims this law will protect farmers from exploitation by middlemen on whom they have traditionally depended.  What it does not say is that the middlemen’s place will be taken by distant corporates who will be more rapacious than the local middlemen.

The third measure, which amended the Essential Commodities Act, allows the Central government to regulate the distribution of food items.

The measures extinguish the power state governments have exercised until now.  In times of distress, they used to intervene and help the farmers by acquiring their produce paying a minimum support price. The measures have met with opposition from farmers all over the country. There were spontaneous protests in many places, in spite of the restrictions imposed in the light of the coronavirus pandemic.

The fiercest opposition came from Punjab and Haryana, the nursery of the green revolution that made India self-sufficient in food grains decades ago. As is its wont, the Modi government had introduced the three measures in Parliament without prior consultations with the state governments, who played a key role in regulation of agricultural markets, and the farmers’ organisations.

Initially, protests in Punjab and Haryana took the form of blocking movement of trains.

Punjab is currently under Congress rule and Haryana is under a Bharatiya Janata Party government.

When the farmers called off railroad blockade, the Centre thought the worst was over and it could go ahead with the reform measures. But the farmers stopped the agitation in their states to carry the battle to the national capital.

When farmers of Punjab and Haryana announced plans to drive to Delhi in their trucks and tractors, the Haryana government said it would deny them passage. Braving water cannons pumping water at great speed, teargas shells and baton charges, the Punjab farmers crossed into Haryana. The authorities made a last desperate attempt to stop them by blocking the highway with huge containers.

Water splashed by the police had turned the ground slushy. The protesters pushed the containers away over the mud.

At the time of writing, several thousand farmers from the two states are camping in or just outside Delhi, posing a ticklish problem for the Modi government.

As the protesters  reached Delhi’s border, Agriculture Minister Narendra Singh Tomar appealed to them to call off the march to facilitate talks. He also invited representatives of farmers’ organisations to meet him on December 3.

The protesters ignored Tomar’s appeal. Home Minister Amit Shah, the second most powerful man in the Modi establishment, then stepped in.

Shah offered to talk to the protesters if they moved to a designated site. They refused the offer as it was conditional.

A leader of the protesters said they were ready to stay on the Delhi border throughout the winter, if necessary.

It is possible for the government to tire them out and force them to suspend the agitation once again.

But it should not imagine it can make changes in the farm sector in the teeth of opposition from the farmers.  Any attempt to ram unacceptable ideas down farmers’ throats will cause  immense damage to agriculture and endanger the nation’s food security.

Some other legislative measures the government rushed through Parliament without prior consultations, such as Citizenship Act amendment and alteration of the status of Jammu and Kashmir, are also hanging fire. The government must take note of the opposition to them, too, and initiate remedial action.

The Judiciary joined the Executive last week in the effort to get farmers out of the highways leading to New Delhi. Farmers from neighbouring states, protesting against three laws enacted by Prime Minister Narendra Modi’s government,