The strange turn by health workers for pandemic - GulfToday 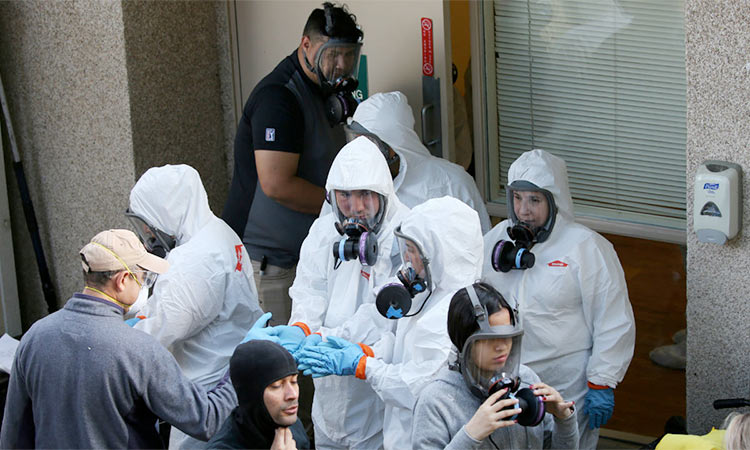 From saluting to hating, relations with health workers have change dramatically.

That spirit seems years away to Anna Halloran.

Halloran works for the Spokane Regional Health District, which recently fired its top health officer, Dr. Bob Lutz. He was sort of the Dr. Anthony Fauci of Spokane. And like the national Fauci, the Spokane one irked some politicians who felt the medical pros had gotten too meddlesome during the pandemic.

Lutz kept resisting a full reopening of the economy, cautioning that a surge of the disease was imminent. He was finally sacked earlier this month, and then immediately proven right — the number of cases in Spokane soared, from about 100 per day in early November to more than 400 per day several times this past week.

“There will be deaths that result from the Board of Health’s decision to fire Bob Lutz,” a Spokane physician told the local newspaper.

Versions of this story have been playing out around the state. Yakima’s top health official just quit last week, saying she could “no longer sustain the costs of the position,” the Yakima Herald reported. In the Tri-Cities, there’s a community petition to fire the health officer there, mostly due to hard feelings about school reopenings.

In Washington, there are now vacancies for the top health position in Yakima, Walla Walla, Spokane, Whatcom, Lewis, Mason, Chelan-Douglas and Okanogan counties.

“I bet you couldn’t find a public health official who hasn’t received death threats or haven’t had people picketing outside their homes,” a hospital association leader told the Yakima Herald.

It isn’t just the health policy people. “Doctors Are Calling It Quits Under Stress of the Pandemic,” read a New York Times headline earlier this month.

“We’re close as a whole, as health care workers, to being burnt out,” Clint Wallace, an ICU nurse in Spokane, testified at a press conference in Olympia on Nov. 15.

Halloran, the Spokane epidemiologist, said she has taken to wondering how it all veered so off track. The work, which for her is identifying and then trying to corral virus outbreaks, has been intense and virtually nonstop since February. Each COVID-19 case that pops up “is like a fire starting,” which then has to be put out by teams of investigators and contact tracers, she said.

Imagine the fire department racing after 400 fires per day and you get the picture.

But somewhere along the way the basic principle of this work — that the community is getting sick and needs medical advice and assistance — got somehow twisted.

“The conspiracy theories started, pretty much from the top, and it has just snowballed,” Halloran says. “Now every time we post anything about new cases, there’s a slew of people who say, ‘How many of these are made up?’ There’s a constant pushback at the most basic level, that we’re just lying about it all.”

After Halloran’s boss, Lutz, was fired, the Spokane mayor, Nadine Woodward, who had bristled at some of the coronavirus restrictions, crassly cheered the firing as “the best news I’ve heard in a long time.” Halloran wrote on Facebook that working the pandemic has been “the worst and most stressful experience of my life.”

“I don’t think we’re seen as a respected agency anymore,” Halloran said. “Something happened with politics or in the culture. We’re all pretty demoralized. You go into health care and it’s the middle of a crisis, you don’t expect to be so vilified by the public, or especially by your own political leaders.”

Folks – what in the world has happened to us?

A disease pandemic is hard and new, so it’s understandable society would struggle. The authority that health officials have in a crisis to at least recommend restrictions and rules that we would never agree to in normal times was bound to provoke controversy.

So when studies of this era are done, maybe we will conclude that in retrospect the medical community could have been more transparent about its decision-making, and therefore come off as less dictatorial, as a shield against exactly these sorts of problems.

But all of that said, we are at the peak of this crisis right this instant. This is it, the maligned experts say: the big wave. It’s likely to be worse than in the spring, with more deaths and more strain on the hospitals. With vaccine development going so well, it may also be the final major wave: “The End of the Pandemic is Now in Sight,” The Atlantic magazine suggested recently.

Chain-smokers are at higher risk of contracting coronavirus, says study

Although the novel Coronavirus can infect anyone, evidence suggests that certain groups - like older adults and those with underlying medical conditions - are at higher risk for contracting COVID-19.

The study examined the characteristics and symptoms of 103 patients who were diagnosed with COVID-19 over a six-week period at Kantonsspital Aarau in Aarau, Switzerland.