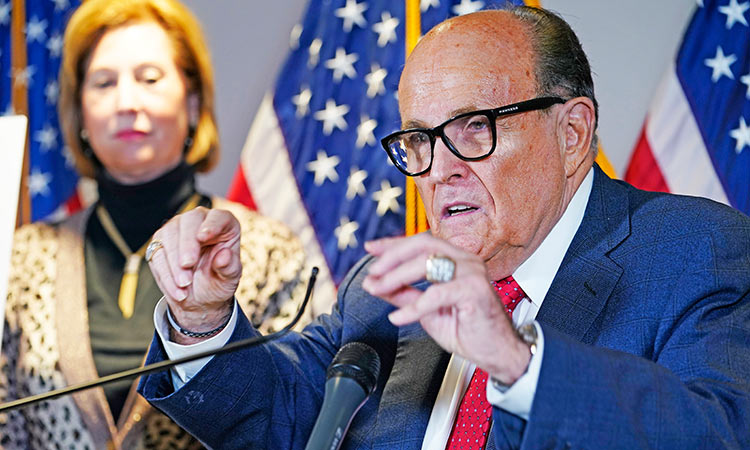 
I don’t care about Rudy Giuliani’s amateur-hour press conference outside Four Seasons Total Landscaping or his need for a cut man at last Thursday’s presser to staunch the flow of hair dye down his cheeks. I don’t care that he tucked in his shirt while lying on a hotel bed with a woman in the room young enough to be his granddaughter. (Okay, I do care about that.)

I don’t even care all that much that he was rusty in court after not litigating a case in 30 years. And neither should you.

I care that Rudy’s meritless, baseless legal arguments allege widespread, nationwide election fraud without proof or evidence. Unless you consider the affidavit from a convicted sex offender to be verifiable proof that his vote was stolen and the election was rigged by the Democrats.

I also care that Rudy, for whom I served as mayoral campaign press secretary in 1993, is recklessly gumming up the presidential transition, dangerously delaying democracy and national security briefings and holding up a virus vaccine distribution plan from being shared by the Trump administration with President-elect Joe Biden and his transition team.

That is why Giuliani’s gambit, in service of President Donald Trump’s infantile ego, is so troubling to me.

Sure, Rudy and his client, soon-to-be-former President Trump, have the legal right to challenge the results in the battleground states, if they had any evidence of widespread fraud, which they don’t. But to what end? Subjecting the country to further chaos, confusion and global embarrassment? Ensuring that Trump adds election-obstructionist to his already-checkered and self-centered presidential legacy? Positioning Rudy to add ever-more dubious characters to his client list?

If the vote in Philadelphia “is not a fraud case,” as Rudy admitted to the judge, than what is it, exactly? His flailing about in court, desperately trying to overturn the results of a free-and-secure democratic election, was heartbreaking and infuriating. In that Williamsport, Pennsylvania, courtroom, Giuliani looked like he was playing in the Little League World Series instead of for his beloved New York Yankees in the World Series.

As mayor, Giuliani bent New York City to his will. You can do that when you’re a strong chief executive in this city. The public advocate can’t stop you. But even he can’t do that in federal courtrooms. As case after case is dismissed, Trump, Giuliani and their undo-the-election team have turned to pressuring state canvassing board members to not certify Biden’s sizable win in Michigan — a state the president-elect won by roughly 150,000 votes.

At a moment like this, if Rudy had true principle, if he had dignity, if he had real strength of character, he would stop the madness of this slow-moving coup. He should put our country and its traditional peaceful transfer of presidential power ahead of himself and the vanquished president.

With the coronavirus resurging, more than a quarter-million of us already dead and millions more out of work, every day counts between now and the Jan. 20 inauguration of Biden as the 46th president of the United States.

Note to Rudy and Donald: That date is immutable.

Giuliani and Trump have a lot of other things in common besides trying to overturn the will of the people. They both want to stay out of courtrooms as defendants; the longer Trump is president, they longer he and Rudy can kick that can down the road. They are thrice-married, bad fathers, worse husbands and Vietnam War draft dodgers. A little military discipline would’ve done them both a lot of good.

Though some suggest they’ve been joined at the hip for decades, Trump and Giuliani were never particularly close. In fact, a Giuliani deputy mayor told me that Trump received only a couple of real estate development approvals from the Giuliani administration, not the many permits for which he applied. And, as my wife Liz told Rolling Stone magazine, Rudy wouldn’t let The Donald buy him breakfast when he was running for mayor for fear of violating campaign finance laws. Good luck to Rudy getting deadbeat Donald Trump to fork over his $20,000-a-day retainer.

I don’t write this with any schadenfreude. I’ve written publicly about Rudy, the man in full, over the past two-and-half years. In May 2018, I praised him in the Daily News for his “hardball” legal defence of Trump. Then, in October 2019, I asked “What Happened to Rudy Giuliani?” in The New York Times.

According to mutual friends, after reading my Times opinion piece, Rudy expressed “disappointment” in me. He went on Fox Business to say that he had “always been fond of Ken” and that I wrote the column critical of him because I was a “Democrat” auditioning for a writing job at “The Times”.

Guilty on both counts. I am a registered Democrat and, as a longtime journalist, would love to regularly write for The Times — though I like the Daily News better, and think their editing touch is superior. But, as fond of Rudy as I once was, I am exponentially more disappointed in him than he is in me.

I’m certainly not the first person to be disappointed in Giuliani; he’s been disappointing people for a long time. Just ask his kids and ex-wives, all of whom he cheated on.

I wrote that “New York Times” column as a hoped-for wake-up call for a former boss.

It didn’t work; he was quickly back spinning yarns about Hunter Biden and Burisma and immediately returned to Ukraine — the scene of the crime. I am writing this column as an appeal to Rudy to cease interfering with the democratic electoral process.

He needs to really think about the consequences of his actions, if there’s anyone in there who cares anymore.

All he’s doing is ginning up Trump’s 70 million voters, or however many of them aren’t disgusted by his refusal to accept the election results, to keep him relevant for the next four years and viable to run again in 2024.

Meanwhile, they’re gutting Biden. Kneecapping the next president. Which is the diabolical plan that Trump and Giuliani cooked up, locked in the Oval Office together.

Unfortunately, this column probably won’t work either to make Rudy see the light. Like his client, Giuliani is a stubborn contrarian with an overweening sense of ego and self-certitude.

But no one can say I didn’t try, try again.