There’s no vaccine for climate change

Even as the pandemic rages on, climate change is not taking a break from wreaking havoc.

The news that Moderna Inc’s MRNA.O experimental vaccine is over 90 per cent effective in preventing COVID-19 is heartening to say the least. The firm has become the second US drugmaker to report results that far exceed expectations.

Together with Pfizer Inc’s PFE.N vaccine, which is also more than 90 per cent effective, the United States could have two vaccines authorised for emergency use in December with as many as 60 million doses of vaccine available this year.

But we are talking about vaccines for a disease that seems to be straddling the world like a colossus, killing thousands all over the globe, and infecting millions. But if one thinks that there could not have been a bigger monster threat than the coronavirus, then he or she can be grossly mistaken. It is global warming that is the issue here, which poses a greater threat than COVID-19, if the Red Cross is to be believed.

Even as the pandemic rages on, climate change is not taking a break from wreaking havoc, the International Federation of Red Cross and Red Crescent Societies (IFRC) said in a new report.

Since the 1960s, the world has been hit by more than 100 disasters – many of them climate-related.

More than 50 million people have been affected.

In 2019 alone, the world was pummelled by 308 natural disasters – over 70 per cent of them climate or weather-related – wiping out over 20,000 people. This is a matter of great worry.

Weather and climate-related disasters have killed more than 400,000 people over the past decade, most of them in poorer countries, with heatwaves and storms proving the most deadly, the report said.

Climate change, which was dubbed a hoax by US President Donald Trump, will have a more significant medium and long-term impact on human life and on Earth.

Global warming will require a much more sustained action and investment to really protect the human life on this Earth.

The international community has to treat it with the utmost priority.

More than three-quarters of countries have indicated they will make stronger commitments under the Paris Agreement on climate change by the end of 2020, despite the economic strain of the coronavirus pandemic, according to a report.

The report added 151 governments have confirmed their intention to meet a UN deadline to raise their targets to cut planet-warming emissions over the next decade.

Of those, 120 nations affirmed they would submit updated climate action plans since the start of the COVID-19 crisis, suggesting they are aiming for a green recovery.

Those that have committed to deliver stronger climate plans in 2020 include the 48 members of the Climate Vulnerable Forum (CVF) from across Africa, Asia-Pacific and Latin America, and the European Union, the Alliance of Small Island States and the least-developed countries.

President-elect Joe Biden has said, however, that he will rejoin the accord when he takes power in late January and his government is expected to submit a stronger climate plan with a 2030 emissions-cutting target before the COP26 conference.

So far, 17 countries have delivered their revised nationally determined contributions, or NDCs, for the Paris Agreement – under which countries have promised to keep global warming to “well below” 2 degrees Celsius and ideally to 1.5˚C.

If countries make good on their pledges to submit NDCs before the end of 2020, it would inject a major thrust into international efforts to combat climate change. 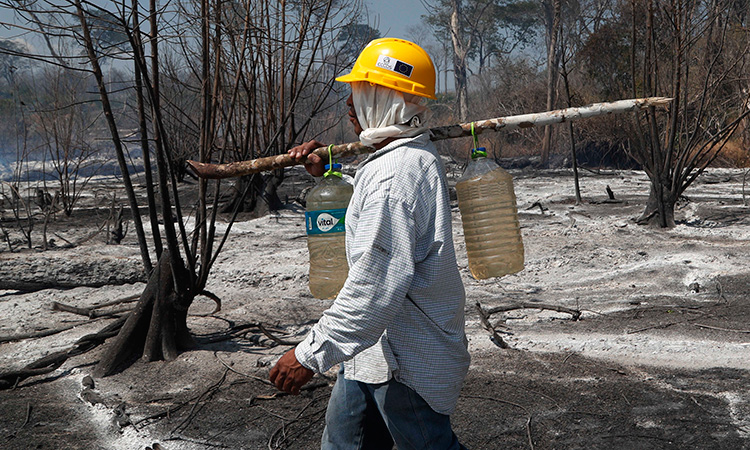