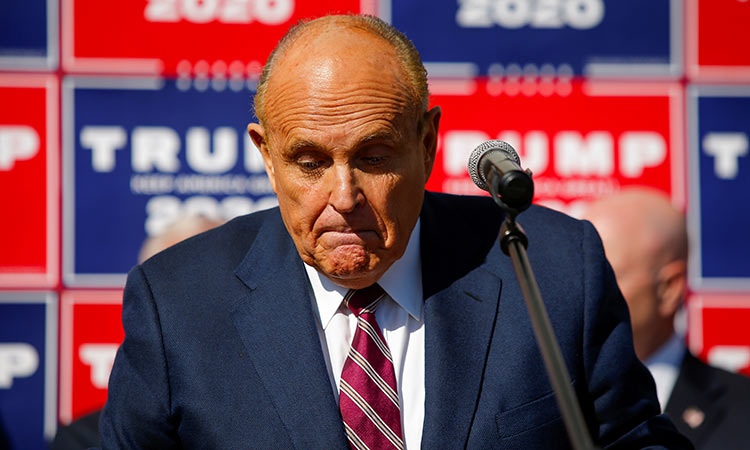 Rudy Giuliani, personal attorney to Donald Trump, speaks after the media announced Joe Biden had won the 2020 US presidential election, in Philadelphia. File/Reuters

It’s been two weeks since American voters delivered the ultimate “You’re fired!” to President Donald Trump, and ten days since the election was officially called for Joe Biden.

Indeed, as of Tuesday morning, President-elect Biden is projected to earn the same number of electoral votes — 306 — that Trump garnered in his upset victory over Hillary Clinton four years ago.

But Trump, who began his presidency by baselessly claiming his popular vote loss to Clinton was the result of “millions” of people “voting illegally,” has once again retreated into the fantasy of an election victory he has not earned.

Since November 5, he has only appeared twice in public: Once to silently lay a wreath at the Tomb of the Unknown Soldier on Veterans Day, and two days later, when he took to the White House Rose Garden to deliver remarks touting the progress of his administration’s “Operation Warp Speed” coronavirus vaccine programme. He has not taken questions from the press since Election Day, when he made a brief stop at his campaign’s Arlington, Virginia headquarters.

As he and his campaign continue to contest election results through a patchwork of lawsuits (over 20 of which have been quickly thrown out as groundless), Trump and what passes for his “legal team” have largely retreated to a safe space.

Although all the major television news networks (plus the Associated Press and an election reporting service called Decision Desk HQ) have called the race for Biden, members of the Trump legal team have continued to press groundless claims of fraud and malfeasance in what sycophantic spaces remain available to them. Top of the list are Fox Business Network shows hosted by Maria Bartiromo and Lou Dobbs, and a pair of upstart conservative TV networks called One America News and Newsmax (both of which have made performative showings of not “calling” the race for Biden even though neither have the sort of statistical infrastructure their competitors use to project the winners of various races).

And while some Trump administration officials (most notably National Security Adviser Robert O’Brien) have acknowledged the inevitability of a Biden administration, sources familiar with Trump’s thinking say the President refuses to seriously entertain the possibility of conceding or allowing the transition process to begin before the Electoral College votes are cast on December 14.

“He’s still trying to do his best King Canute and hold back the tide,” said one person who regularly speaks with the President. Trump’s promotion of OANN and Newsmax was partly an attempt to retaliate against Fox News for (correctly) calling Arizona for Biden, he added, and is also meant to get more of his followers in the same information bubble he prefers to remain in these days.

Another source close to the President said much of Trump’s mistaken belief that a major court win reversing multiple states’ election results is just around the corner comes from his trust in Rudy Giuliani and another frequent TV-commentating attorney, Sidney Powell. Giuliani has continued to repeat baseless and discredited claims of so-called voter fraud in a series of television appearances since his now-infamous press conference at a Philadelphia-area landscaping business located between an adult bookshop and a crematorium. According to a Tuesday court filing, he will soon make his first appearance in a courtroom since 1992 in order to press Trump’s claims before a Pennsylvania federal judge.

Powell — who is also representing former Trump National Security Adviser Michael Flynn in his attempt to have a Washington DC federal judge dismiss charges of making false statements to which he has twice pleaded guilty — has not made any court appearances on Trump’s behalf since he announced (on Twitter) that she would be joining his new legal team. She has, however, spent a lot of time on television making outrageous claims about the company that manufactures the voting machines used in Georgia, George Soros, and the CIA.

Also making television (but not court) appearances on Trump’s behalf is the husband-and-wife duo of Joseph DiGenova (a former US Attorney for the District of Columbia) and Victoria Toensing (a former Deputy Assistant Attorney General in the Justice Department’s Criminal Division). Like Powell, both have had respectable legal careers but are more widely known to television audiences for the conspiracy-laden rhetoric (often featuring antisemitic undertones with George Soros as an antagonist) they have offered in the President’s defence.

Bradley Moss, a Washington-based attorney with extensive experience in federal courts, said that the common denominator with Trump’s lawyers is that they “are more known for their TV hits and their public personas than they are for their legal prowess”.

“[Trump] likes to be surrounded by those who will feed his overarching views, who will tell him that there’s legitimacy to this,” he added.

While Trump’s shift from white-shoe lawyers to TV lawyers came after a succession of top law firms withdrew from cases in key states, the President and his campaign have signalled that they intend to fight on. This seems to be their position regardless of whether their claims have merit or whether they have competent representation.

Leah Litman, a University of Michigan Law School Assistant Professor, suggested that the withdrawal of so many well-credentialed lawyers is a sign that Trump’s legal strategy is going to turn more outrageous and desperate.

“That fact that they are withdrawing now suggests we have not reached the bottom just yet, and that the bottom is going to be so crazy that it’s causing the lawyers who were willing to try and throw out thousands of ballots and argue that there was voter fraud because members of the military voted for Biden or that wearing a Black Lives Matter shirt amounted to voter intimidation to jump ship,” she said.

As for the President, he remains firmly ensconced in his television safe space. On Monday, OAN’s morning show host declared that the network (which lacks a decision desk) was projecting Trump to have a 232 to 227 electoral college lead over Biden, with Arizona, Nevada, Georgia, Michigan, Wisconsin, and Pennsylvania remaining uncalled for either candidate, because “we here at One America News are the only ones providing truthful, accurate numbers, as we believe President Trump… still has a chance of winning”.